The students of the University of L'Aquila will say "Let's meet at Canada" or "See you at Canada."

No, they are not about to hop on a transatlantic flight. They are about to walk down a hill from the main campus on the outskirts of town to a modern structure formally called the Palestera Centro Polifunzionale – Youth Community Centre. It vaguely resembles a small-city airport and was Canada's reconstruction gift to the destroyed Italian city after the April 6, 2009 earthquake, which killed 309 people, 55 of them students.

Except the community centre was not really part of the reconstruction effort; it was a new development on a vacant piece of land. And therein lies its functional and diplomatic brilliance. It was inaugurated a mere two years after the earthquake and became an immediate hit on campus. On the fifth anniversary of the tragedy, it has become a useful and lively symbol of Canada's can-do attitude.

Many other wealthy countries, including France and Russia, also contributed substantial reconstruction funds. But most of their efforts are going into rebuilding the wrecked architectural gems in the city's historic centre. Progress is being made but is so slow that it is almost invisible.

France, for instance, is sponsoring the salvation of the Blessed Souls church in L'Aquila's main square. Built in the early 18th century, the minor baroque masterpiece, best known for its soaring, barrel-shaped dome, was all but destroyed in the earthquake and its powerful aftershocks. Five years after the quake, its repair is only just starting. If all goes to plan – unlikely given the stop-start nature that has characterized most of the city's overhaul – it won't be finished until mid-2016. The centre of L'Aquila may be alive with reconstruction activity, but it's still a ghost town. Before the earthquake, about 40,000 people lived in the centre. Today, it's home to a few hundred brave souls, none of whom thinks the city will get its old vigour back for another five years, maybe ten.

The 6.3 earthquake hit at 3:32am and was felt as far away as Rome, 100 km to the west. Its epicentre was close to L'Aquila (The Eagle), the capital of central Italy's Abruzzo region, in the Apennine Mountains. The destruction was indiscriminate. Apparently solid medieval, Renaissance, baroque and neo-classical buildings were damaged or destroyed as readily as modern structures, such as the dormitory that collapsed, killing eight students (last year, four Italian technicians were convicted for having carried out shoddy reconstruction work on the dormitory in 2000).

A year after the earthquake, then prime minister Silvio Berlusconi cleverly shifted the Group of Eight summit from Sardinia to L'Aquila in the hopes that the G8 leaders would take pity and offer reconstruction assistance. It worked. One by one, government leaders toured the wrecked city and, against a backdrop of rubble, announced financial contributions. Prime Minister Stephen Harper offered $5-million. But Canada's plan would be as clever as Mr. Berlusconi's – it would create something new instead of restoring something old.

The community centre is no architectural gem but is buzzing with activity. "It's always open and always full of students," says Bernardo Mancini, 39, the centre's supervisor. "There was nothing like this in L'Aquila before the earthquake…It's one of the few projects that was promised and was actually built."

The centre covers about 4,500 square metres (48,400 square feet) and is dominated by a vast gymnasium, called The Canada Fitness Club, in which everything from basketball games to dance classes are held. The building includes an exercise room, seminar hall, cafeteria, library and two study areas equipped with computers that are especially popular with students.

The centre never lets you forget that it's Canadian. A Canadian flag and banner hang outside and the entrance patio to the building is dominated by outline of an enormous the maple life in cobblestone. The front yard is lined with 55 maple trees in commemoration of the students who were killed in the earthquake.

Canada doesn't always get its Italian diplomacy right. Its image with the Italian government suffered last year when it decided to sell Villa Grandi, the glorious ambassador's residence in Rome, near the ancient Appian Way. Built in 1934, it was once the home of Dino Grandi, Benito Mussolini's foreign minister who played a key role in the fascist dictator's downfall. The sale of the property signalled to the diplomatic corps in Rome that Canada is happy to downgrade its image in Italy.

The community centre in L'Aquila has put Canada back on the diplomatic map and there is more to come. The Canadian government has contributed almost $300,000 to the construction of a new autism centre in L'Aquila, which will feature earthquake resistant wood construction materials from Quebec. "The image of Canada is very good here," says Mr. Mancini. 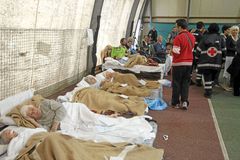