It is the middle of a lovely summer and you are almost certainly not in the market for new worries, especially about an election that is going to happen in another year in another country. So whether you are in the Rockies, in Ontario cottage country, or along the beaches of the Maritimes, your World Insider columnist is here to provide you with several things not to worry about:

Mr. Trump, known as The Donald, has a big mouth and has had a big month in U.S. politics. No matter. He has but a small window, and it closed last week. Some respectable publications are consigning him to the entertainment sections, not the political sections, although little about Mr. Trump – who, in one week, lashed out against immigrants and a war hero, and then, describing another candidate as an idiot, gave out his rival's cell phone number – is particularly entertaining.

The final thump of that window probably came when Mr. Trump took on Senator John McCain of Arizona. Republicans and Democrats disagree on many things – in truth, these days they disagree on almost everything – but there is no disagreement that Mr. McCain is a genuine American hero. A Navy airman shot down over Hanoi, he was tortured and kept in solitary confinement. Offered a chance to be released, he demurred, arguing that he did not want special treatment.

The Trump campaign has reminded us of the difference between the words "insightful" and "inciting," and of the truth in the eighth entry in the Sayings of Confucius: "Of a gentleman who is frivolous none stand in awe, nor can his learning be sound." When Mr. Trump threatened last week to bolt from the Republican Party and run as an independent if he is not treated with the respect he contends he deserves, he displayed disloyalty to the party and inadvertently summoned up memories of another bizarre billionaire who ran as an independent candidate, Ross Perot. When he attacked Mr. McCain, he expended the last remaining shards of his credibility.

All of which leads us to the next thing not to worry about:

Do not worry about the presidential polls

Mr. Trump is ahead in a number of them, so that itself is proof of their irrelevance. Polls at this stage of a presidential campaign – the actual election is 15 months away – are notoriously unreliable. That includes the latest Washington Post/ABC News poll that showed Mr. Trump with 24 per cent support in the Republican field, with Governor Scott Walker of Wisconsin far behind at 13 per cent and former Florida governor Jeb Bush at 12 per cent. Some day those poll numbers will be the punch line of a joke, or the answer to a trivia question.

These early polls measure the prominence of the candidate's name rather than the plausibility of the candidate as president. For that reason, even the insertion of Richard M. Nixon in the Republican polls – he left office 41 years ago in disgrace – would skew the results. Probably 20 per cent of those polled in a Republican survey would choose him. They would at least have heard of him, as opposed to Governor John Kasich of Ohio, who last week joined the race – the 16th candidate – or former governor George Pataki of New York, who has not been in office for nine years, and was not all that prominent nationally when he was.

Similarly, the relatively high poll rankings that Senator Bernie Sanders of Vermont is raking in as an alternative to former secretary of state Hillary Clinton are meaningless. Mr. Sanders has been portraying himself as the real Democrat, and Ms. Clinton as an instrument of Wall Street and big contributors. When it comes down to it, Ms. Clinton very likely will prevail and Mr. Sanders will be regarded as an earnest crusader in a splendid lost cause.

Do not worry about the crowds these candidates are attracting

The crowds are mostly in New Hampshire and Iowa, two states where presidential politics is a peculiar passion, and where voters come out to hear candidates as much for curiosity's sake as an expression of support. New Hampshire voters in particular regard a political meeting as a grand spectator sport, all the more so in a season like this in which their beloved but pitiful Red Sox are performing like the Maple Leafs without skates.

Mr. Trump's crowds – and they have been large – are very likely one part supporter, one part spectator. Just the other day, former senator Bob Kerrey of Nebraska, himself a 1992 presidential candidate, told a New York Times columnist that Mr. Trump's crowds were attracted to the political equivalent of a bearded lady at a circus. He used the phrase "freak show" to describe Mr. Trump.

Quite apart from freak shows, crowds are unreliable measures of political power. In the final days of his doomed 1984 presidential campaign, for example, former vice-president Walter Mondale attracted huge crowds and fed off of them, giving the most impassioned stump performances of his life. A few days later, he lost 49 states. Eight years later, in 1992, Mr. Perot mounted a quixotic third-party presidential campaign and won big crowds. Number of electoral votes he won: Zero.

All that is proof that in this splendid summer season – whether lakeside in Algonquin Park or on an Alberta mountainside – you need to consult only one political philosopher. His name is Bobby McFerrin, and his view is expressed simply: " Don't worry, be happy." 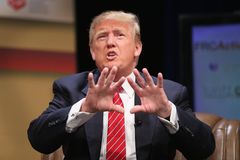