In late 2012, when I was in Egypt covering the massive street protests against then-President Mohammed Morsi, I took a taxi into the centre of the city – one of those chaotic Egyptian cab rides made excruciatingly long by unmoving traffic. As we inched along, the driver listed his many complaints about both Mr. Morsi and his administration: that the government had accomplished nothing of substance; that it was more concerned with consolidating its own power.

Most of his complaints seemed perfectly justified, but apparently I didn't agree with him vehemently enough, because eventually he turned to me with a look of mild disgust and said: "You must be with the Brotherhood."

Even before the 2011 revolution that changed the country, Egypt was never a particularly welcoming place for reporters. But today, thanks to a hate affair with the Muslim Brotherhood that has become something of a low-level, state-led war, Egypt is one of the most dangerous places on Earth to practice journalism.

It has been more than 40 days since three Al Jazeera journalists were arrested in Cairo and charged with terrorism-related offences stemming from an apparent attempt to interview members of Egypt's massive but now-outlawed Muslim Brotherhood. They are among 20 or so journalists the military-led Egyptian government is accusing of similar crimes (many, many others have been detained, roughed up and, in a few cases, killed).

The charges against the Al Jazeera journalists are vague in the bureaucratic way that such accusations tend to be – the men are accused of "spreading lies" harmful to the state, and giving their audience the false impression that Egypt is in the midst of a civil war.

But beyond the wording of the charge sheet, what the men are really accused of is having too close a relationship to the terrorist-labeled Muslim Brotherhood. For years, many anti-Brotherhood Egyptians have loudly criticized Al Jazeera (particularly, its Arabic-language service) for being a mouthpiece for the Islamic group. Indeed, during some of the anti-Morsi protests last year, demonstrators took out their frustrations on the channel's downtown offices.

In effect, the detained journalists are accused of aiding the enemy.

Under the regime of Hosni Mubarak and his predecessors, official media freedoms were very limited, and the state media organs were little more than government mouthpieces. However foreign outlets were relatively unhindered in reporting from the country.

But since the 2011 revolution that Mr. Mubarak, Egypt has become one of the most dangerous places in the world from which to report. Initially, physical safety was perhaps the primary concern, thanks to widespread chaos on the streets and a tendency for subsets of the massive crowds to quickly turn on the journalists in their midst (especially any journalists who appeared to be from U.S. outlets).

But since the overthrow of Mr. Morsi, the most immediate threat to reporters within Egypt has come from the state itself. In less than a year, the military-led government has launched a sprawling and determined effort to punish any reporters seen as too cozy with the Muslim Brotherhood. And because Al Jazeera (and the Qatari government) has long been seen as sympathetic to the group, the network has taken much of the punishment.

In recent weeks, both the White House and the European Union (in addition to myriad human rights and journalists' groups) have condemned the detention of the Al Jazeera journalists, but those condemnations seem to carry little weight in Cairo. Indeed, the military-led government recently called in Qatari officials stationed in Egypt to demand the transfer of even more Qatar-based journalists accused of similar crimes.

Indeed, it seems there is nothing the Egyptian government, led by military head Field Marshal Abdel Fattah El-Sisi, feels it can't do, as long as it frames as a move to rid the country of the Muslim Brotherhood's influence.

Not only is the Brotherhood Egypt's largest religious group, it has been for years the largest organized political body outside of the authoritarian state itself (a fact that led to Mr. Morsi's razor-thin victory margin in Egypt's first free elections in 2012, as the Brotherhood-backed candidate ran against a deeply fragmented opposition, with a member of the ousted Mubarak regime as his only viable opponent).

But outside of the group itself, the Brotherhood is loathed by millions of Egyptians – for a variety of reasons. Primarily, many Egyptians see the Brotherhood as driven purely by self-interest, a charge reinforced by Mr. Morsi's short stint in power, during which time virtually all of Egypt's systemic problems, from the economy to traffic, got worse – but the Brotherhood's grasp on power grew.

Other, more vehement critics see the Brotherhood as a full-on terrorist organization, intent on converting Egypt to an Islamic state in the footsteps of the Taliban in Afghanistan and willing to tear the country apart if it has to. Indeed, the rash of bombings and the killings of several police officers throughout the country in recent months have all effectively been attributed to the Brotherhood by many Egyptians, even as other groups sometimes publicly claimed responsibility for the attacks.

It is on this deep loathing of the Brotherhood that Egypt's military government is now capitalizing, using it as justification for a widespread crackdown on media freedom and, more widely, any form of dissent. Even by Mubarak-era standards, the level of repression is draconian – and yet, because much of it is framed as a means to limit the influence of the Muslim Brotherhood, it is applauded by large swaths of the Egyptian population.

Early on, the military-led government saw just how much leeway it had in its anti-Brotherhood efforts when, last summer, security officials moved in to clear two pro-Morsi protests camps near Cairo, killing about 1,000 people in the process. Despite the slaughter, many Egyptians praised the move as a necessary step to bring stability back to the country. In comparison, the arrest of college students for waving the four-finger "anti-coup" sign – or even the arrest of journalists on flimsy terrorism charges – seems downright tame.

But twinned with the deep dislike of the Brotherhood is another, less overt emotion among many Egyptians – the desire for calm and predictability. Despite the venerated status of the 2011 revolution, life in post-revolution Egypt has been, in many respects, much worse than during the Mubarak era. When I was last on assignment in the Egypt in 2012, I saw a country barely able to function – traffic jams lasted for hours on end throughout Cairo; foreign investment had plummeted, as had tourism; city-stalling demonstrations were a daily occurrence. Quietly, Egyptians were coming to an uncomfortable conclusion – while democracy and freedom of speech were undoubtedly good things, they were also messy and chaotic. Life under a dictator, while repressive, at least provided stability.

Now, in Mr. El-Sisi, those Egyptians have found someone who is perhaps most able to satisfy both their hatred of the Brotherhood and their desire for some measure of societal predictability. In less than a year, the military leader has become the centre of a massive cult of personality, his picture pasted on pastries and raised high in wedding ceremonies. So strong is the sycophancy that now surrounds him that Egyptians are now treated to proclamations such as that of well-known local actress Soheir al-Babli, who declared in a recent press interview that she hopes Mr. El-Sis becomes President, and that "Egyptians need a man as strong as Hitler."

And by running for the presidency, which he will almost certainly will, Mr. el-Sisi offers Egyptians these twin desires – to see the Brotherhood crushed and a return to civil stability – all couched in, at least, the appearance of democracy.

After years of post-revolution chaos, it's simply too good an offer for many Egyptians to refuse. And so the country's slide into something very similar to Mubarak-era authoritarianism continues, cheered on by much of the population. And if a few journalists get arrested along the way, so be it.

There’s another 'Canadian' in an Egyptian prison. Why the silence? Subscriber content
February 7, 2014 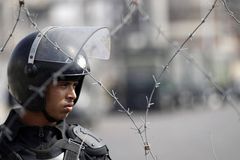 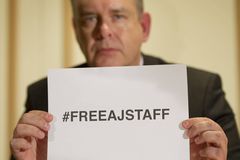 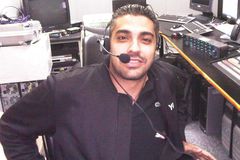 Obama ramps up pressure on Egypt to free journalists, including Canadian
February 5, 2014 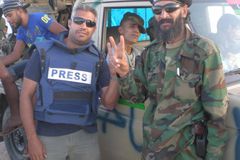