The United States has just completed a weeks-long bath in Kennedy nostalgia and Kennedy commemoration, remembering the 35th president, celebrating his celebrity and glamor, re-examining his record, evaluating his presidency – and, inevitably, comparing him, unfavorably, to the 44th president.

But the tragic trip to Dallas that ended the John F. Kennedy presidency also began the Lyndon B. Johnson presidency, and comparisons, even more negative, between Barack Obama and the 36th president have dogged Mr. Obama since his inauguration. Far more than JFK, LBJ is the subject of a full-force gale of revisionism, and the new view of Johnson provides special perspective on Mr. Obama.

The prevailing cliché is that the problem with Mr. Obama is that he isn't enough like Johnson in one special, spectral way. Mention BHO and LBJ in the same breath among most American commentators and, (American) dollars to (Tim Horton) doughnuts, this is what you'll hear: No one's afraid of Obama the way they were of Johnson. That's not true in an elemental way, but not the way you might think. For most of his presidency, no one was afraid of Johnson either, because for a good deal of his presidency he was a reviled, weak figure, constantly psychoanalyzed (and never – never – winning a healthy mental diagnosis from the amateurs sitting beside the Johnson couch) and increasingly marginalized. It is true, to be sure, that he had great accomplishments on Capitol Hill, but not because he was fearsome. It was because he was persuasive.

Until he wasn't. Once the civil rights and voting rights legislation were passed – and these truly were among the most important social advances of the 20th century – and after the great early burst of Great Society legislation, especially the 1965 Medicare bill, was approved, attention on the Johnson administration moved swiftly, and irrevocably, to foreign policy, where Johnson was attacked as a recondite Cold Warrior hopelessly blinded by the domino theory and by the cultural blindness that allowed him to suggest that he might pull off a New Deal-style program for the Mekong Delta.

The Johnson administration is easily divided into two parts.

One way: domestic and foreign. Another: Pre full-scale Vietnam involvement and after. A third way: Idealism and power politics.

In the past decade or so Johnson has enjoyed a handsome revisionism, with the grand manipulator of Credibility Gap and the headstrong mobilizer of Vietnam replaced by the visionary social planner, idealistic spokesman for racial tolerance and equality, homespun dreamer of a more just society. This began, perhaps, with the public conversion to LBJ's side long after the president 's death of two of the greatest real-time opponents of the Johnson administration, the Canadian-born economist John Kenneth Galbraith and the 1972 peace-now Democratic presidential nominee George S. McGovern, a onetime history professor possessed of a Ph.D. They both said publicly that they misunderstood and, as George W. Bush might say, misunderestimated Lyndon Johnson.

Now to return to Mr. Obama. Like LBJ, he dreamed of a vast social overhaul that would leave a footprint on the American path and would change the way Americans lived and, just as important, changed how they aged. His overhaul of health insurance can easily be seen as an important step between the current U.S. health care system and the eventual expansion of LBJ's Medicare, which now applies to those over 65, to all Americans – if, of course, some future Republican congress and president don't repeal Obamacare.

Mr. Obama is not, to be sure, as persuasive on Capitol Hill as LBJ was, but that is in large measure because Capitol Hill in the 21st century bears little resemblance to Capitol Hill in the mid-20th century. There are, for example, no moderate or liberal Republicans for Mr. Obama to corral the way Johnson corralled Everett Dirksen of Illinois, John Sherman Cooper of Kentucky and Jacob K. Javits of New York.

Many Democrats have turned on Mr. Obama, but not with the anger and vitriol with which Democrats turned on Johnson. The modern Democratic apostates are worried about whether the health-care overhaul Mr. Obama shoved through Congress on a strictly partisan basis might disappoint their constituents. But they do not describe him as a moral reprobate. They're disappointed, not enraged.

So as American half-century commemorations move from the Kennedy years to the Johnson years, Mr. Obama may be in for a bit of a breather. It would help, however, if his website worked. Lyndon Johnson had no such problems. Unfortunately for him, and for all those involved in the conflict in Southeast Asia, that Vietnam escalation worked just fine. 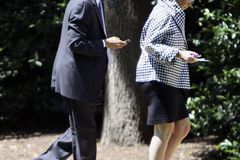