Too early to be called a victory lap.

But less than a year before Americans choose his successor, President Barack Obama completed a globe-girdling tour this week that sharpened the focus of the foreign-policy priorities that will shape his legacy.

The President's aims are clear: rallying nations to see global warming as the existential threat; delivering on the "pivot to the Pacific;" strictly limiting U.S. casualties in Middle East wars; and shaping the Sino-American relationship that will dominate the coming century.

Mr. Obama, as always cautiously pragmatic, made incremental progress on all fronts.

In Turkey, he refused to get swept up in vengeful revulsion over the Paris attacks and outbursts of bellicose rhetoric from ally French President François Hollande and adversary Russian President Vladimir Putin. Nor was he swayed by war fury from Republicans seeking to replace him.

While admitting that the massacre in Paris was a "terrible and sickening setback" in the war to crush Islamic State and its vision of purist caliphate, Mr. Obama resisted the call to escalate the war. "The strategy that we are putting forward is the strategy that ultimately is going to work," he said, adding: "It's going to take time."

In short, a massive commitment of U.S. boots on the ground might win the war – as it did in Iraq in 2003 – but they wouldn't be able to deliver a stable civil state unless the U.S. public was willing to commit for generations as they did in Germany, Japan or South Korea.

Instead, Mr. Obama is prepared to hand over a limited arm's-length air war to his successor.

On the dire perils of global warming, the President used the G20 summit in Turkey and the 21-nation Asia Pacific Economic Co-operation gathering in the Philippines as scene setters for the upcoming Paris conference where Mr. Obama will seek massive cuts in greenhouse gas emissions.

Having spiked Keystone XL to clean up his own credentials and struck a bilateral emission pact with China, Mr. Obama is pushing aggressively for binding multilateral commitments.

APEC includes the world's biggest emitters, like China and Indonesia, as well as the worst per-capita offenders like Canada and Australia. So Mr. Obama delivered a rallying cry to business leaders gathered in Manila in advance.

"The science doesn't lie – temperatures and sea levels are rising, ice caps are melting, storms are strengthening," he said, adding: "If we want to prevent the worst effects of climate change before it's too late … and that's why, in Paris, just two weeks from now, we have to come together around an ambitious framework to protect the one planet we have while we still can."

Global warming, not Islamic State, is, in Mr. Obama's view, the existential threat.

For Mr. Obama, the president most rooted in the Asia-Pacific, who spent part of his childhood in Indonesia and his adolescence in Hawaii, the current trip is his ninth to the region and evidence he has made progress on what he's called the "pivot."

American presence, both in the just-completed Trans-Pacific Partnership trade pact and in military assertiveness not seen since the end of the Vietnam war, are the twin pillars of Mr. Obama's approach to the rising power of China. Mr. Obama has both engaged with Beijing and pushed back hard when China's Communist government has threatened to ride roughshod in the region.

In the Philippines, en route to APEC, he donated two more U.S. naval vessels and vowed that "the United States will continue to sail, fly and operate anywhere that international law allows." Last month, a U.S. warship deliberately breached China's claimed 12-mile limit around one of its artificial islands and more sail-bys are planned.

At a meeting of leaders of the 12-nation TPP, the first since the sweeping trade deal was completed – and with it still facing tough ratification battles in Congress and elsewhere – Mr. Obama said the pact was "at the heart of our shared vision for the future of this dynamic region."

But China isn't a part of the TPP and Mr. Obama's long game is that Beijing will eventually seek entry. "Without this agreement, competitors that don't share our values, like China, will write the rules of the global economy," Mr. Obama said after the deal was done.

The President clearly intends to continue shaping outcomes long after he has left the Oval Office. 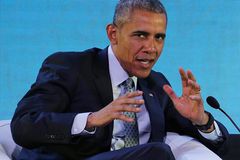 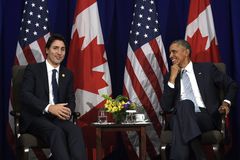