As the world waits for the other shoe to drop, let us consider the possibility that neither Vladimir Putin nor Barack Obama are in possession of another shoe.

After a near-total majority of Crimean citizens voted for their Russian-speaking Ukrainian province to join Russia on Sunday in what most of the world views as an illegitimate referendum manufactured by Moscow, there has been a day of tense inaction between the West, and especially President Barack Obama, and Mr. Putin.

On Tuesday, Mr. Putin will address the Duma, where he is expected to acknowledge Russia's recognition of Crimea's secession (so far it is only recognized by Venezuela, North Korea and Syria, as well as Abkhazia, the Georgian territory that was occupied by Russian forces in very similar circumstances in 2008). The two presidents spoke by telephone Sunday for 90 minutes, during which Mr. Obama threatened Russia with punishing sanctions and declared the vote a violation of international law and Mr. Putin claimed that the vote was legitimate and Russian soldiers had entered Crimea only to protect its people from Ukrainian "radical groups."

Not for 52 years has there been such a tense and direct standoff between leaders of Washington and Moscow. But now, unlike in the Cold War, it appears unlikely that either side will be able to resolve this crisis through either threats of force, diplomatic persuasion or back-channel deal-making (the latter of which ended the 1962 Cuban Missile Crisis).

Both leaders are somewhat stuck. They are in positions with few viable next moves available.

At first glance, Mr. Putin appears to be in the stronger position: After all, he has potentially gained territory, secured an ideological victory, and helped destabilize and humiliate a Ukraine at the moment of its protest movement's success in seeking more democratic government.

His Crimea move appears to have been enormously popular within Russia, capitalizing on a revived imperialist ideology known as "Eurasianism" that seeks to expand Russia's territory far more widely across the Slavic world.

But in many ways this is may be the peak of his success. He could conceivably launch a wider invasion of mainland Ukraine, but that would certainly trigger a direct military response from the West while gaining Russia little more than an expensive, troubled, civil war-prone territory at huge cost. Mr. Putin, however extreme his ideology, has generally shown an equally strong penchant for self-preservation.

And he must realize, on some level, that the Crimea vote was carried out in the least advantageous circumstances for Russia. Observers say that the Crimea plan, in which Russian soldiers marched in to "secure" the peninsula followed by a quick and carefully orchestrated secession vote, had been designed years ago (perhaps designed, like the 2008 Georgia actions, as a response to any Ukrainian effort to join the North Atlantic Treaty Alliance), and was carried out near-automatically after pro-Russian president Viktor Yanukovych was voted out of office by his own party last month.

Yet Mr. Putin could easily have engineered a Crimean secession that would have been considered legal and recognized by the world. Most Crimean citizens have always preferred to join Russia, and Russia already has the constitutionally-guaranteed use of Crimea as a major military base. He could easily have won Crimea for Russia, if he wanted it, without triggering an international crisis, if circumstances had not forced him to exercise his plan now.

Then again, Mr. Putin's preferred style has always been to sow ambiguity and chaos in border territories, and he may find this continued uncertainty more beneficial to his political interests than any clear resolution.

Barack Obama at least has one unambiguous course of action in response to the Crimean seizure: He will, as he told Mr. Putin, organize a large-scale economic embargo on Russia and a program of large-scale support to Ukraine. This would be far more menacing than any military action: Russia's state financing is between 60 per cent and 80 per cent dependent on exports (mainly petroleum) to the West.

But he, too, is hampered by circumstances. The European Union's major powers, and especially Germany, have so far failed to act in concert behind any punishment of Russia. On Monday, the financier-philanthropist George Soros said that the EU has once again failed Ukraine: "Europe was totally unprepared for this crisis and Putin outmaneuvered Europe with no difficulty," he said in a media interview. "I hope that Europe will respond to it and actually really rediscover its original mission because that's what got lost in this distortion that has occurred." There was frenzied activity in Brussels and Berlin on Monday to achieve this goal, but it appears it may take longer.

Mr. Obama also faces a Republican Party whose members and media voices accuse him of "weakness" in this crisis. It is a somewhat nonsensical charge: After all, George W. Bush faced exactly the same position, when Russian troops marched into the Georgian districts of Abkazia and South Ossetia in 2008, and his hawkish stature at the height of the Iraq war still left him with no options other than those faced by his successor today. But it could hamper his ability to act in quick concert with allies.

A quick, decisive, unanimous and large-scale economic action is exactly what is required, from every major Western state, today. Unfortunately for Mr. Obama, neither his own legislature nor his allies appear prepared for speed or decisiveness. His only consolation may be that Mr. Putin is equally trapped. 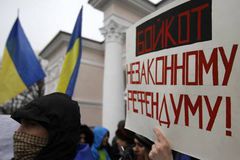 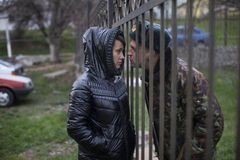