David Shribman
Special to The Globe and Mail
Published March 10, 2015 Updated May 12, 2018
For Subscribers

Americans have been celebrating a riot of 50th anniversaries: Martin Luther King's "I Have a Dream" speech, the Kennedy assassination, the unveiling of Lyndon Johnson's Great Society. But no half-century commemoration has hit Americans with the moral force of the parade of 50th anniversaries, which reach a crescendo this month, of the some of the signature moments of the Civil Rights Movement.

"Suddenly a lot of young people are embracing the story of the Civil Rights Movement and trying to import its meaning into today," said Representative Donna Edwards, a black lawmaker from Maryland and a leading Senate candidate in next year's elections. "It isn't the old guard retelling its stories. It is young people laying the Civil Rights Movement over their own experiences."

The impetus for this upsurge in interest is the confluence of these multiple anniversaries, the searing memories of the racial turbulence last year in Ferguson, Mo., and the popularity of the Ava DuVernay film, Selma, which has been viewed widely throughout the United States and in many cinemas in Canada.

But along with the passions stirred by the film has come a realization, especially among aging leaders of the Civil Rights Movement, that the story of 1960s struggle and suffering has been lost.

Vernon E. Jordan, 79, former president of the National Urban League and a prominent civil-rights leader, viewed the film with a group of what he characterized as "sophisticated black business executives." In the course of the evening, Mr. Jordan mentioned he was preparing to travel to Duke University to mark the centenary of the birth of John Hope Franklin (1915-2009), the distinguished black historian who served as the president of the Organization of American Historians and the American Historical Association.

"I asked them if they knew who he was," Mr. Jordan told me in an interview. "Not one hand went up."

Even so, the film has brought new attention to the agony and achievements of the movement.

"The movie has generated a great deal of fresh interest," said Rod Doss, editor of the Pittsburgh Courier, for decades regarded as perhaps the most important African-American newspaper in the country. "These young people were shocked to see some of the images. They didn't realize black people were brutalized the way they were. It's a lesson in how far we've come, but also has lessons for how far we have to go."

Mr. Doss is not alone in stressing how the film has both rekindled interest in the Civil Rights Movement and provoked an American conversation about the tasks remaining to assure that the country lives up to the promise, descried as "self-evident" in the 1776 Declaration of Independence, that "all men are created equal."

Dorie Ann Ladner, who served as Mississippi field secretary for the fabled Student Nonviolent Coordinating Committee, travels around the country to help people remember the struggles she witnessed. "An entire generation is being introduced to a whole part of history that has been forgotten," she said. "And the more that a new generation learns about this, the more the values of the Civil Rights Movement come into the narrative."

Elaine Jones, daughter of a Pullman porter and the first woman to serve as president and director-counsel of the Legal Defense Fund of the National Association for the Advancement of Colored People, believes this spate of 50th anniversaries is the most relevant yet.

"It is a period when people are trying to understand the past and rededicate themselves to a new future," she said. "The march at Selma was all about participating in the political process. Some of us have become somewhat lax in that, and we have to fix it."

In 1996, Congress created the Selma-to-Montgomery National Historic Trail. Perhaps today's path to remembrance might lead Americans to reconsider the remarks of two of the principals in the struggle for the black vote.

The first is Rev. King. "Once more the method of non-violent resistance was unsheathed from its scabbard, and once again an entire community was mobilized to confront the adversary," he said at Selma. "And again the brutality of a dying order shrieks across the land."

The second is President Johnson. "Because it is not just Negroes, but really it is all of us, who must overcome the crippling legacy of bigotry and injustice," he said in his 42-minute speech on Capitol Hill. "And we shall overcome." 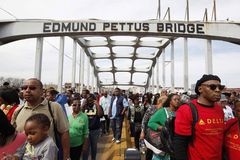 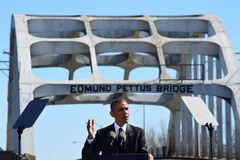