Since the start of 2014, an average of 300 unaccompanied children have crossed the border illegally into the United States every day. Nobody knows how many avoid detection or never even get that far.

Most of these children come from the Northern Triangle. With U.S. detention centres overflowing and an estimated 70,000 expected to arrive this year, President Barack Obama has called this an "urgent humanitarian situation."

U.S. politicians are battling over proposed changes to the country's immigration law, but the real issue extends beyond migration and border control. According to a report from the United Nations High Commissioner for Refugees, 58 per cent of 400 Central American children interviewed about why they left home said they "had suffered, been threatened, or feared serious harm."

The Northern Triangle is one of the most dangerous regions in the world. Honduras imploded following a military coup in 2009 and now has the world's highest murder rate. El Salvador has the second-highest and Guatemala, the fifth.

The violence is being fuelled by a bitter gang conflict. The region is home to an estimated 70,000 gangsters and it is the young who suffer most. The vast majority of gang members are between 12 and 25 years old, and in El Salvador alone, 93 per cent of murder victims are aged between 15 and 17.

The two largest gangs are 18 Street and Mara Salvatrucha, also known as MS-13. They are embroiled in a bitterly violent turf war, which is tearing vulnerable communities apart. The gangsters call themselves soldiers, but it is a mistake to think this is about drugs. The gangs say they are engaged in a battle with "the system," as well as their rivals. Their aim is to defend and provide for their barrio, their neighbourhood.

New members are recruited in schoolyards. Often children are forced to join through intimidation. They are told that they or their families will be killed if they refuse. As part of their initiation, new recruits are made to murder a member of the rival gang. As one 14-year-old member of MS-13 put it: "I had to kill or be killed."

Once a member, children are then exploited as hit men by the gangs. There are two main reasons for this. Firstly, it is simply easier for them to kill. They are more agile and victims are unsuspecting of children who might approach them. Secondly, children receive lenient sentences. They are often released after only several years, meaning they can still be of use to the gang when they are out.

The number of undocumented children – mostly teens, but some as young as 5 – apprehended crossing the border into the United States has more than doubled in the past two years. Border officials refer to the "surge," but whilst an increase in numbers may be undeniable, it is a mistake to think that the countries of Central America, which have long been plagued by violence and instability, have suddenly become even more violent.

The sad truth is that the children of the Northern Triangle have been at risk for many, many years. The lack of security, the lack of education, few employment opportunities and unplanned urban growth – which have created an environment of marginalization and exclusion – are often blamed for inciting the region's gang problem. A lack of investment and the absence of effective social cohesion policies have left generations of youths feeling disempowered and rejected.

Many gang members were also abandoned by their families at a young age. José, a 16-year-old from El Salvador, said he'd been living alone since the age of 12. Both of his parents had fled to the United States in search of work. They send him $100 (U.S.) every couple of months, which is just about sufficient to survive. But with no family structure, it was not long before José was adopted by the gang. They can provide food, security and even love. But of course this comes at a price. A violent one.

José's story is not unusual. Many youngsters have parents who migrated north in order to be able to provide more for their families. In El Salvador, 38 per cent of children have been left by one or both parents, and now these families are seeking to be reunited.

José says his parents want him to join them in New York, where they work illegally as cleaners. "We just have to save the $7,000," he says. This is the fee charged by illegal immigration racketeers, or so-called coyotes, to help provide passage for these children. It's a lucrative industry, but it's not a safe passage. The journey involves great risk and can end in kidnap, robbery, rape or even death.

President Obama has held meetings with the presidents of Honduras, Guatemala and El Salvador, most recently on July 25. He has also asked Congress for nearly $ 4-billion in emergency funding to pay for more border security, temporary detention centres and additional immigration court judges to process asylum cases.

Changes to U.S. immigration law may stem the tide of illegal migrants, but they will do little to improve conditions for the hundreds of thousands of minors struggling with poverty and violence on a daily basis in this region.

The gang conflict of the Northern Triangle is not a new problem. It is, however, getting worse. There is now evidence to suggest that these gangs are being exploited by the much more powerful and dangerous drug cartels, but this is not just a security matter.

"It's time to look at the social conditions, which are fuelling organized crime," said one government official in El Salvador, who did not want to be named because he is not authorized to speak on the matter. "But there's no appetite for that. We lack the resources. And it's also a problem of the poor. As long as it stays that way, there's no real will to fix it either."

Mathew Charles is a freelance journalist and director of a documentary on El Salvador's gang conflict, The Engineer

Crossing over: A flood of migrants at its southern border challenges America's idea of itself
August 1, 2014 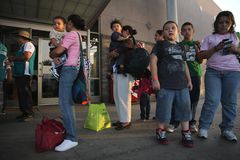 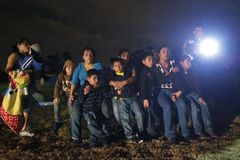 Central American leaders to meet with Obama over influx of young migrants at border
July 25, 2014