About a year ago, I planned to pay a smuggler to get on a boat to Europe.

A lot of people in Europe and abroad think that us refugees don't know that we can die at sea, that we have not seen the horrific pictures of refugees' dead bodies, that we don't know that tens of thousands of people have been buried on Europe's shores.

But I do watch the news every day, and I had seen how more than 500 people had died a few kilometres from the Italian island Lampedusa in October, 2013. I knew the statistics, I knew the risks. I had even lost friends of mine, who are some of the "refugees without a face and without a name," as the media refers to them.

But, as many Syrian refugees who – together with Eritreans – made up around half of the refugees crossing over to Europe by boat in 2014, I thought this was my only chance.

I am a Syrian refugee from the Palestinian Yarmouk Camp in Damascus. When I was small, my grandmother used to tell us how she felt when she was forced to flee to Syria from her home in Palestine in 1948, and how she hoped that her children and grandchildren would never have to experience what it feels like to be a refugee. But we did.

I was born a Palestinian refugee, and almost three years ago, I became a refugee once more, when my family and I had to flee the Syrian war to Lebanon. Our home, the Palestinian camp, had been under the hardest siege one can possibly imagine. I am still in touch with family and friends who could not leave Yarmouk Camp. Many of them have starved to death or died because they do not have access to medication or treatment. In a cruel absurdity, they sometimes have Internet, but they don't have food.

My friends and family have always known me as a very optimistic person. I love life, I love people. I had worked in Cyprus, and even when I could not return home to my beloved Syria because the war had already started, giving up was the last thing I had in mind.

In Lebanon, I started supporting my fellow Syrians and Palestinian-Syrians. They needed me, and their smiles and appreciation kept me going. I woke up every morning to volunteer with DPNA, a partner organization of CARE. But about a year ago, I could not bear the situation anyone. I felt the refugees' suffering, the Syrians', the Palestinians', the Syrian-Palestinians'. I felt their misery, their destroyed hopes and dreams.

And I also thought about my own life, my future. I had lost hope.

Before the war in Syria started, I had my whole life ahead of me. But then, at 27, my life as it was suddenly took a break. As much as I loved to volunteer, I could not work legally in my profession as an engineer any more. I had studied, I had money, a good job. Suddenly, I stood there with nothing at all. Being a refugee also means taking away your future, your dreams.

I did not get on the boat.

After long discussions with my family and friends, I am still in Lebanon, and I am still supporting my fellow refugees. I am leading a project to train other volunteers now. Refugees are in need of humanitarian support. The refugees I work with have been engineers like myself; they were doctors, teachers, farmers and workers.

We had normal lives, and, as much as we refugees appreciate Europe for what it is, it's not "heaven on earth" for us. Like me, most refugees dream about going back home. But if peace will not be restored and neighbouring countries such as Lebanon continue to struggle with the burden of hosting more than four million refugees, Europe for some seems to be the only option to live a life in dignity. We humans are all quite similar: We love our friends, our families, our home. We do not give this up easily.

But bombs and bullets keep us away from the place we love most.

I follow the news, I follow the discussions. I hear politicians talk about the necessity that the EU resumes its rescue missions; about issuing asylum to Syrians and other refugees before they have to travel on unsafe waters. I am truly touched that so many people around the world cry out about our suffering, that people around the world care. They understand that I have not chosen to be born as a Palestinian-Syrian, as you have not chosen to be born as a Canadian. I do not wish my situation to anyone. But I would hope that we could make this time in history a time of change.

More than anything I hope that European and other leaders around the world resume their efforts to push for peace talks. In the end of the day, most refugees hope that they can cease to be called refugees, that their countries will restore peace and that they can return to the places they love most: their homes.

Ali Sandeed is a Palestinian-Syrian refugee living in Lebanon where he volunteers with DPNA, a partner organization of CARE International. This piece was submitted by CARE, which supported Mr. Sandeed in producing this article.

The real reasons why migrants risk everything for a new life elsewhere
April 24, 2015 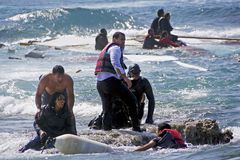 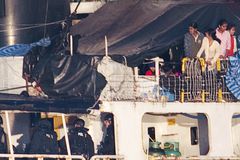