Flights out of Cairo are overbooked, lineups for gasoline stretch more than a kilometre in many places, households are stocking up on food and army tanks have taken up positions around government institutions, embassies and shopping malls. Egypt is on the edge of another major crisis.

Once again, opponents of President Mohammed Morsi and the Muslim Brotherhood that backs him threaten to take to the streets in protest this weekend on the first anniversary of his election as President.

This time the number of opposition protesters is likely to be bigger than ever, and this time they are expected to be met by equally large demonstrations of support for the man who won Egypt's first-ever free and open election for national leader.

Mr. Morsi's detractors – mainly liberals and supporters of the former regime of Hosni Mubarak – complain mostly about the lack of work and shortage of fuel. In the upper echelons of the opposition, they gripe also about the absence of constitutional protection for minorities and about the heavy-handed manner in which Mr. Morsi operates.

"We've exchanged one dictator [Mr. Mubarak] for another," is the way many put it.

In a rambling, two and a half hour, nationally-televised speech Wednesday night, Mr. Morsi acknowledged some of the opposition complaints – the economy, he agreed, still has not recovered from the dearth of foreign investment and the lack of tourism brought about by the 2011 uprising and the chaos that has followed Mr. Mubarak's political demise.

The President even admitted having made mistakes – he apologized for the poor planning that led to the fuel shortage, for example – and vowed to do better.

But, for the most part, he blamed sinister forces for trying to destroy Egypt's young democracy. Some of those forces he named, such as those behind his opponent for president last year, Ahmed Shafiq, a Mubarak-era cabinet minister and former prime minister.

Other forces were only described as "foreign" and left his audience guessing as to whom he referred. Most Egyptians will assume it is Israel that somehow is planting seeds of discontent; others will take it to be the United States, a popular bogeyman despite the fact that U.S. President Barack Obama has publically supported the Egyptian leader on numerous occasions.

That the country is facing enormous economic problems is no surprise. Mr. Morsi inherited a mess that only could get worse when confrontations discouraged investment and tourism.

What is surprising, however, is that it is the Muslim Brotherhood that is in power during these difficult times. It wasn't supposed to be that way. When Brotherhood leaders plotted their course during the 2011 uprising against Mr. Mubarak, cooler heads recommended that the Islamic movement not contest more than a fraction of the seats for parliament and sit out completely the race for the presidency.

Let other parties form the first government and control the executive, they reasoned. Let them have to face all the inevitable problems; then let the people turn to the Brotherhood's Freedom and Justice Party to form the second government, the one with a better chance to succeed.

Somewhere along the line, that approach was abandoned – perhaps because of greed or overconfidence – and the Brotherhood contested all of parliament's seats as well as the presidency. Now the movement and Mr. Morsi are paying the price.

Egypt's opposition protesters, however, should be careful what they wish for – there are several possible outcomes to this current crisis, some of which are probably worse than the present situation.

One scenario would have the Brotherhood replacing the uninspiring Mr. Morsi with a more charismatic figure sure to capture votes and leave the movement firmly in control.

Another would see the more doctrinaire Salafists come to the fore – they are sitting out this current crisis, keeping their political powder dry. Having captured a surprising 25 per cent of the seats in parliament, these more extreme Islamists have tremendous scope for growth.

Perhaps the most likely scenario, however, would have the army march back into power to put an end to the unproductive anarchy.

The enterprising opposition have launched a novel petition calling for the President to step down. The campaign is called Tamarod (Arabic for rebel) and it has collected some 13 million signatures, its organizers say. That's more than the number of people who voted for Mr. Morsi a year ago.

But bringing down a leader like this will only lead to another election, one that the opposition is going to lose as well.

The opposition has to realize there is no shortcut to real democracy. Protest is a valid expression of dissent and should be tolerated in a democratic society, but it's not a bona fide replacement for free, fair and regular elections.

If the opposition put as much effort into organizing political parties and cultivating support as they put into protesting and collecting signatures, the country might end up with leaders worth supporting. 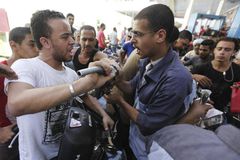 Opinion
For Egypt, the fiscal cliff is a real and present danger
April 4, 2013