It's been whispered in Kiev for months now: Ihor Kolomoisky, the billionaire governor of the eastern region of Dnipropetrovsk, had accumulated too much power.

Mr. Kolomoisky, whose region borders war-torn Donetsk, is the man and the money behind several front-line battalions who have done some of the toughest fighting in the war against the Russian-backed separatists. But those battalions – some of whom use far-right iconography – have defiantly remained outside the full control of the Ukrainian general staff.

It's been whispered in Dnipropetrovsk for just as long: Ukrainian President Petro Poroshenko's waffling was undermining the war effort. The President's refusal to declare martial law – in order to direct all the country's efforts at winning the war in the east – was a target of scorn among Mr. Kolomoisky's supporters, as were Mr. Poroshenko's repeated efforts to cut a ceasefire deal with Russian President Vladimir Putin.

So the news Wednesday morning that Mr. Poroshenko had fired Mr. Kolomoisky from his post as governor of Dnipropetrovsk was not quite a shock. The two men didn't agree on much anymore, and their behind-the-scenes power struggle was made public recently when dozens of armed men believed to be working for Mr. Kolomoisky briefly took over the Kiev offices of Ukrnafta, a state energy company, as well as the headquarters of its pipeline subsidiary, Ukrtransnafta.

Transiting Russian gas across Ukraine is a lucrative and politically sensitive endeavour. Mr. Kolomoisky owns 42 per cent of Ukrnafta via his PrivatBank, the country's largest commercial bank, and is said to be angered by a new law that reduced quorum at shareholders' meetings from 60 per cent to 50 per cent, diminishing his influence over the firms.

It's hard to overstate how dangerous a development this "war of the oligarchs" is for Ukraine. The real fighting in Donetsk and Lugansk – which has killed 5,600 people since last April – has cooled for the moment, and the year-long economic crisis looks set to ease (or at least stop worsening) as $17.5-billion (U.S.) in aid from the International Monetary Fund pours in. But the country's two most powerful men are about to square off, and it could get bloody.

Mr. Kolomoisky doesn't just own the loyalty of some of Ukraine's toughest fighters. He controls several television stations, including the English-language Ukraine Today. His pocketbook is also believed to sponsor many MPs in Ukraine's parliament, the Rada, undermining some of the ideals last year's pro-Western revolution in Kiev was supposedly about.

Among those believed to be on Mr. Kolomoisky's payroll are many MPs from Prime Minister Arseniy Yatsenyuk's Popular Front party. In an interview last month with The Globe and Mail, Mr. Yatsenyuk was harshly and increasingly critical of the ceasefire deal Mr. Poroshenko had reached with Mr. Putin. The President and the Prime Minister are also at odds about the pace and scale of political reforms.

Interior Minister Arsen Avakov and Rada speaker Oleksandr Turchynov, who served as interim president before Mr. Poroshenko's election last year, were also seen as close to Mr. Kolomoisky, at least before the Ukrnafta affair. Where their loyalties lie in this power struggle is a crucial question.

Mr. Poroshenko, meanwhile, is an oligarch in his own right, a billionaire who still controls a television station of his own, despite promises to sell it off upon his election as President last year. He is believed to have won the loyalty of the army with his regular appearances in uniform at the front line. But he is also blamed in some quarters for defeats such as last month's loss of the strategic rail hub of Debaltseve, which he ordered to be defended even after it was almost completely encircled by pro-Russian forces.

The most discouraging thing about the Poroshenko-Kolomoisky fight is what it tells us about today's Ukraine. A year on from the revolution, where more than hundred people lost their lives in a street battle to force the corrupt Viktor Yanukovych and his oligarchic "family" from power, Ukraine is still ruled by a handful of rich businessmen who seem much more interested in personal gain than in keeping the country together.

The Ukrainians who stood on "the Maidan," Kiev's Independence Square, last winter demanding change could be forgiven for thinking that they still haven't gotten the country they were asking for, only rule by different oligarchs. There is already talk in Kiev of the need for "a third Maidan" (the similarly flawed Orange Revolution of 2004 is counted as the first), this time to purge the oligarchs from the system for good.

It was Mr. Poroshenko who appointed Mr. Kolomoisky as Dnipropetrovsk governor last year, seeing him and his battalions as a bulwark against Russian-backed separatism. And for a while, the fight against Mr. Putin was enough to unite the two oligarchs, and to paper over their political differences.

As Mr. Poroshenko and Mr. Kolomoisky turn on each other, Mr. Putin is perhaps the only one clapping. 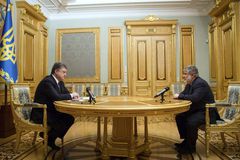 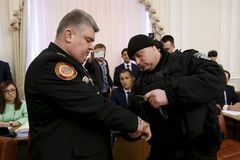