Though he hates the idea of taking jobs away from poor people, the CEO of a sanitary-wares company in New Delhi nevertheless told me recently that he is going ahead with automating his plant. "My orders are always delayed. I can't find anyone with the skills I need," he said. "Graduates apply and they know nothing useful to me."

Talk to any Indian CEO in any industry and you hear the same cri de coeur – the impossibility of finding skilled labour. Yet talk to almost any educated Indian youth and the talk is of deep desperation in finding a job.

What was being touted a few years ago as India's 'demographic dividend' – its large population of working-age people – has gone horribly wrong. According to a 2011 survey by the human-resources company Manpower, nearly 70 per cent of Indian employers struggle to hire staff.

The government failed to realize that for young workers to become productive assets, they need both education and vocational skills. Of the one million young Indians who join the work force every month, many have neither suitable education nor any specific skills.

My driver's son, a physics graduate in Bihar, is frantically looking for a call-centre job because nothing else is available. Even if he had chosen to pursue a vocational skills training course rather than study physics, he would still have failed because India has insufficient centres of vocational-skill training – around 9,000 of largely mediocre quality as compared with China's estimated 500,000.

India churns out graduates and post-graduates who, unable to find other work, end up as bus drivers and security guards.

A recent report released by the government's National Sample Survey Organization, based on a survey it carried out during 2009-2010 of 460,000 people, revealed that only 2 per cent of India's youth and 7 per cent of the whole working-age population has received vocational training

More than half of India's population of 1.2 billion is younger than 25. Yet its misfortune is that, unlike China's economic boom, India's growth has been largely jobless. The figures are almost too stark to believe. Between 2005 and 2010, the number of jobs generated in India was fewer than three million. During China's boom years, around 130 million jobs were created. Last year alone, China created 12.7 million new jobs.

China's growth was powered by a manufacturing expansion. India's manufacturing is stagnant, largely as a result of off-putting government policies. Forget foreign investors – even Indian industrialists quail at the idea of setting up a new factory because of the ordeal, usually lasting many years, involved in obtaining the multitude of licences and clearances required.

When the plant is finally up, antiquated labour laws make it hard to run the factory. That's why many industrialists are voting with their feet and expanding their businesses in Africa and Latin America instead. It's easier.

Now, with the Indian economy growing at around 4.5 to 5 per cent – half the rate seen during the peak years – there is not much hope for job creation.

Here is where the scenario becomes even more dire: the working population, aged between 15 and 64, will rise by more than 120 million over the coming decade. By its own estimates, the government reckons that 500 million young people must be trained by 2022.

That's a figure that should keep the government awake at night. But no signs of panic are evident. At the moment, the ruling Congress party is thinking only of how it can win next year's general election.

But woe betide the party that rules this country if the unthinkable were to happen – hundreds of millions of unemployed youths roaming the streets, rampaging against a society that gave them no future.

Amrit Dhillon is a journalist based in New Delhi.

How India’s ruling party dropped the ball on the economy
Subscriber content
June 6, 2013 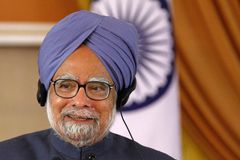