The ruling fell like a bomb. Liberal Indians and gay rights activists reeled in horror when, on Wednesday, the Supreme Court reinstated an archaic law under which gay sex is illegal.

They had expected the Supreme Court to rubber stamp a landmark 2009 ruling by the Delhi High Court that India's 19th century law on homosexuality, dating back to Raj days – effectively banning gay sex – should not apply to consensual acts. Instead, the Court upheld the old law.

The Supreme Court's ruling was all the more shocking because it has played an important role in driving India towards modernity by coming out with stinging comments on some of the country's most regressive customs, such as honour killings, dowry and bribery.

This time, it had been expected to do its bit for gay rights so that India could finally join all the other countries in the world which have given gays the same human rights as others. What the Court did instead was to avoid pronouncing on the desirability of the current law, which criminalizes gay sex, and to pass the buck to Parliament, saying that the law was 'constitutionally valid' and so only Parliament could change it.

The reactions to the ruling demonstrated vividly the extreme diversity of opinions found in India. This is a society in great flux, occupying several centuries simultaneously. At the liberal extreme you have gay rights groups, who form part of the elite, with 'gay pride' marches like those in the west.

In the middle are the bulk of middle class Indians who are conservative on matters of marriage and sex, preferring to stick to tradition and not caring a great deal about the rights of homosexuals or other minorities. (Though to be fair to the right wing Bharitya Janata Party, its spokeswoman, while welcoming the ruling, pointed out that the current law is only really used to punish non-consensual sex – when gay sex is consensual, there is no question of the law being invoked because there is no victim or complainant.)

Then, at the other end of spectrum are people like yoga celebrity Baba Ramdev who harks back to the Victorian era by saying that he has, "remedies to cure homosexuals of their disease."

In its attitudes towards gay rights, adultery, divorce, pre-marital sex and live-in relationships, India is in synch with other parts of Asia, where social conservatism prevails. Marriage and family are the bedrock of this society and any practices which threaten this foundation are frowned upon.

Malaysia, Myanmar, Pakistan, Afghanistan, and Singapore all have anti-gay laws. The reason is not just Asian conservatism but also that some of these countries are Muslim and in the Muslim world, gay rights are not upheld as a rule (though Indonesia is the exception here).

If India is upholding a law that belongs to another era, it is largely because, despite some recent gay marches, it has not experienced the sustained debate that was seen in the west and which culminated in new and more humane laws banning discrimination.

All those television debates, articles and columns, social campaigns, films and celebrities coming out, which succeeded in breaking down old attitudes in the west, have simply not happened in India. Apart from one or two fashion designers, writer Vikram Seth and a Bollywood director, few famous people admit to being gay. The process of re-thinking old beliefs is nascent. It will take time for Indians to alter their views in large numbers.

Luckily, a push in the right direction may come from the government, which seems to have been as startled at the Supreme Court ruling as gay activists. Catching the popular mood of outrage, the ruling Congress Party rolled out its big guns after the verdict to say that the government would take urgent steps to change the law.

Until that happens – it could take three to six months – Indian gays will continue to feel like criminals. The ruling was followed by anguished outpourings from some homosexuals about how they had to go back to "hiding who I am, not being able to be myself and having to pretend all day," as one blogger wrote.

Novelist Vikram Seth struck a note of angry defiance: "I wasn't a criminal yesterday but today I certainly am. And I propose to continue being a criminal."

Around the world, LGBT people still struggling for acceptance
December 11, 2013 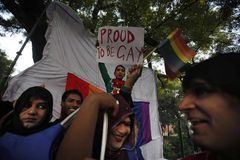