In 10 days, before the stroke of midnight on Feb. 24, Afghanistan President Hamid Karzai must decide his legacy for Afghanistan's women, on whether or not he will sign more than 15 million of his countrywomen and girls into legislated slavery. The international community needs a gut check if they will allow him to do it on their dime, using their name.

In post-Taliban Afghanistan, women found some level of legal protection from domestic violence and abuse for the first time in almost three decades. However, the gains made since 2002 are in danger and facing a defining moment after conservative legislators rewrote and passed a controversial and new Criminal Procedure Code, rescinding the protections afforded under the law and preventing relatives of alleged abusers from testifying in cases involving domestic violence.

If Karzai does not veto the new code, it automatically becomes law.

This pending code's Article 26 would essentially allow a man to disfigure his wife, or pay a debt by selling his daughter or sister into a marriage of forced sexual servitude, wherein she will answer to her new family. Why? Because the new code would gag them and their family members from filing a complaint with the police, the prosecutor or testify in court.

Women would have no recourse in the case of rape, beatings, abuse or even selling them into prostitution. It would be tantamount to instituting gender-based slavery. That would run counter to the spirit of Islam, where women are held in high esteem, and strands of Afghan tradition that respects women.

Article 26 does not abolish Karzai's widely lauded 2009 decree instituting the Law on Elimination of Violence against Women (EVAW), wherein 22 crimes, including rape and the selling of daughters, were made illegal and with specific punishments for perpetrators. Article 26 will simply make it procedurally impossible to enforce.

Putting Afghan women in such a dilemma and backtracking on legal commitments after 13 years of investment and hard work by Afghans and foreign donors to restore their rights within a moderate Islamic and civil framework, are not only shocking, but also unacceptable.

So why is the law of the land being changed? It can only be discerned as a play by Karzai to further ingratiate himself with the Taliban, who have so far consistently ignored his every gesture. Karzai should take stock of his true position and see that selling Afghanistan's daughters' right to be free from violence will only earn him a legacy of being a weak protector of the very civilians he says he has a responsibility to protect.

By politicizing human rights, protection, and access to justice for half of the population, the country's jurisprudence and political leaders will bear a deep moral responsibility if they fail to step up and take position.

It is not enough for civil society and human rights organizations to take up this cause, but also incumbent on politicians, especially the presidential contenders, and for the religious community to take position against forces of ignorance and regression.

What this revision to the criminal procedural code will also do is further sabotage the already weak support in Western countries for sending a modest training force to mentor the nation's young security forces, and bankrolling Afghanistan's government and military post-2014. The international community contributes $3.9-billion (U.S.) annually to keep Afghanistan's government afloat, and another $3.6-billion for the Afghan National Security Forces.

While enticing, losing all patience with Karzai, packing up and leaving Afghanistan would grant al-Qaeda a cheaply bought strategic victory, destabilize the region, revive the Taliban's aspirations, and leave Afghanistan's women and girls in an even worse situation. The donors need to take a novel approach: Hold Afghanistan's leaders accountable and mean it.

The Karzai administration agreed in Tokyo in summer 2012, a year later Kabul 2013, and just last month that the aid it received is predicated on the government delivering on improving women and children's access to justice, not bolting the door. According to the World Bank, the Afghan government relies on the international community to pay for more than 90 per cent of the country's Gross Domestic Product (GDP). That's leverage.

But it has to be used in a judicious and targeted manner to avoid hurting the Afghan people, women and children included.

Karzai has seven days to make a choice. Afghanistan's political and religious leaders and the international community have less time to help him make the right one.

Laura Winter is a senior associate at the Center for Strategic and International Studies. She was a spokesperson, and a media and foreign affairs adviser for NATO and the US Department of Defense (2009-2013), and a reporter and broadcaster in Afghanistan (2001-2005).

The views expressed in this article are the authors' own. 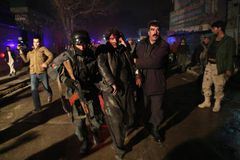