The last time a sitting Canadian prime minister set foot in the Middle East, it merited a small item on Page 2 in The Jerusalem Post. "Jean Chrétien arrived at Ben Gurion airport last night," the report began, before briefly describing Mr. Chrétien's planned itinerary for the 12-day trip in the spring of 2000.

It was a tour designed to showcase Canada's scrupulous neutrality in the Middle East – and to perhaps move peace negotiations forward a little, using Canada's clout as a mediator on the issue of what will become of the millions of Palestinian refugees around the region.

Fourteen years later, the reception could scarcely be more different ahead of Stephen Harper's first visit to the Middle East. Before his luggage is even packed for this weekend's trip, he is already being hailed by the same Jerusalem Post as a remarkably pro-Israel leader whose coming should be celebrated. "Canada has emerged as Israel's staunchest ally in the world," columnist David Weinberg wrote last week. "Prime Minister Harper and his team should be warmly welcomed in Jerusalem this month as super-valuable allies and trusted friends."

"Let there be more Stephen Harpers," was the headline on another op-ed piece in the same paper.

The medium, of course, is the message. The Jerusalem Post is an English-language paper known for its right-wing politics. To readers of The Jerusalem Post, the Palestinians are a security problem, not a human-rights issue. The paper views Mr. Harper as a rare world leader who sees the region the same way. (The left-wing Haaretz newspaper has used a lot less ink covering Mr. Harper's scheduled visit.)

The Palestinian Authority, meanwhile, will likely spend little time grooming the red carpet for Mr. Harper's expected brief visit to Ramallah. Canada's "position is not fair toward the Palestinians. We want them to pay deep attention to the human-rights breaches that Israel commits every day against the Palestinians," said Mahmoud Labadi, foreign affairs spokesman for the ruling Fatah party. He said Palestinians remain shocked and offended that Mr. Harper's government was one of only nine United Nations members to vote in 2012 against granting Palestine "non-member state" status at the international body.

Mr. Harper's visit comes as U.S. Secretary of State John Kerry is furiously working the phones (and accumulating air miles) trying to nudge Israeli Prime Minister Benjamin Netanyahu and Palestinian president Mahmoud Abbas toward a framework deal that just might set the stage for a peace agreement ending Israel's 46-year-old occupation of the West Bank. But while Canada still heads the working group on the refugee issue – one of the thorniest outstanding topics – Mr. Harper's visit almost certainly won't advance Mr. Kerry's cause. The Palestinians no longer consider Ottawa to be a fair mediator.

Both Mr. Chrétien and Mr. Harper got the welcome they sought. Before the 2000 visit, Mr. Chrétien's staff told reporters in Ottawa that "treading carefully" would be the aim of his trip, which included meetings with Israel's then-prime minister Ehud Barak, as well as Palestinian leader Yasser Arafat and Syria's Hafez al-Assad.

(The visit nonetheless grew into a political nightmare for Mr. Chrétien, thanks to his famously confusing way with words. "I don't know if I am in West, South, North or East Jerusalem right now," he told an audience that cared very much about that precise detail.)

Mr. Harper has taken a side – Israel's – at every opportunity since assuming office in 2006. That became even clearer recently when the government appointed Vivian Bercovici, a lawyer and newspaper columnist with no diplomatic background, as Canada's new ambassador to Tel Aviv. Based on her writings, Ms. Bercovici agrees with the Jerusalem Post's black-and-white view of the Middle East. Whatever the issue, Israel is right, the Palestinians are wrong.

This week, as Israelis mourned former prime minister Ariel Sharon, one of their country's founding fathers, Palestinians were celebrating the passing of a man they viewed as a monster.

Mr. Sharon was a complicated historical figure, a decorated general who was found responsible – by an Israeli commission – of allowing the massacre of hundreds of Palestinians at the Sabra and Shatila refugee camps in Lebanon in 1982. Later, as prime minister, Mr. Sharon shocked many of his right-wing supporters by unilaterally ending Israel's four-decade occupation of the Gaza Strip and making preparations to do the same in the West Bank.

"The champion of controversy," and a man history teachers will struggle to accurately describe, is how Haaretz remembered him last week.

But there was no such nuance in Mr. Harper's tribute. "A renowned military leader, Mr. Sharon pursued the security of Israel with unyielding determination that was recognized by friends and foes alike," read the statement from the Prime Minister's Office. 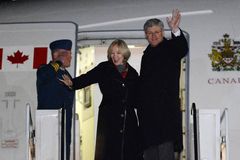