Almost exactly a year from now, Barack Obama will leave the White House. His final year in office will be overshadowed by the maelstrom of the Republican primary, followed by the most polarizing presidential election campaign in modern U.S. history.

These are supposed to be the wind-down days. Mr. Obama's grandest successes – implementing the Affordable Care Act, shepherding the country past its worst financial crisis in almost a century – and his most glaring failures – his attempts to close the Orwellian grotesquerie in Guantanamo, trying to convince lawmakers to pass even the most basic gun-control measures – are set now, the broad strokes already painted and dry.

But surveying the totality of Mr. Obama's eight years in office, another image appears – something less political, something profoundly sad.

So many of the President's defining moments – his most human moments – have come in the aftermath of slaughter.

There was December of 2012, when he had to console the grieving families of the Sandy Hook Elementary School massacre, in which six adults and 20 children were killed.

There was last summer, when he delivered perhaps his most soaring slice of oratory, eulogizing the victims of a racist killer's rampage at the Emanuel African Methodist Episcopal Church in Charleston.

And then there was this week, when he went to the podium at the White House to announce a modest set of gun-control measures and, at the mention of all those kids who were shot dead at Sandy Hook, the President cried.

"We are the only advanced country on Earth that sees this kind of mass violence erupt with this kind of frequency," the President said in his speech, flanked by a group of people from across the country whose lives have been forever changed by gun violence. "It doesn't happen in other advanced countries – it's not even close.

"The gun lobby may be holding Congress hostage right now, but they cannot hold America hostage."

The Obama administration is trying once more to push for some movement, no matter how humble, on the gun-control issue in the hope that by drumming up enough public outrage, it can pressure lawmakers to act.

And if Congress won't act, Mr. Obama promises to go it alone. His announcement on Wednesday essentially amounts to a set of executive orders intended to bypass a Republican-majority Congress and Senate. It's also certain to raise the ire of conservatives perpetually worried about federal overreach.

In reality, the President's proposals are meagre. Some are so blatantly self-evident that they will likely shock some Americans – for example, closing a loophole that allows some dealers to sell guns online or at gun shows without subjecting their customers to a background check, something that is required for virtually all other gun sales. Other proposals include an upgraded database and 200 new federal officers to monitor those background checks, more stringent requirements for reporting lost or stolen guns and $500-million in extra spending on mental health care.

Absent is any mention of banning military-grade rifles, high-capacity magazines or armour-piercing bullets. Absent, in fact, are some of the very proposals Mr. Obama once believed he could pass in the wake of the Sandy Hook massacre.

Nonetheless, a chorus of Republicans, including many of the party's leading presidential candidates, lined up on Wednesday to decry the proposals as unconstitutional and ineffective.

Mr. Obama's critics are right when they say the measures won't end gun violence in America – not because they don't address the problem, but because they still fall far short of what virtually all advanced countries on Earth consider common-sense gun laws. The President knows this, just as he knows the zealotry of the pro-gun lobby will outlive his presidency.

His gun-control initiatives aren't intended to change any of that. More than anything, Mr. Obama's proposals are an attempt to gauge the American public's appetite for serious reform, even if that reform won't come for a long while.

He will long be known for his speeches, but the talent that aided Mr. Obama most during his eight years in office has always been his ability to foresee shifting tides – his ear attuned to the sound of once-ironclad public opinions slowly losing favour. Cognizant of a new generation of voters disgusted with the state of health care in America, he managed to push through a law that saved countless Americans from having to choose between physical and financial ruin. Sensing that acceptance of gay rights had turned a corner nationally, he finally made his administration's support for those rights vocal and overt (a decision for which Vice-President Joe Biden probably deserves most of the credit).

His failures have followed a similar trajectory. Headed to the White House in 2009, he believed the country was ready to rid itself of the flagrantly unconstitutional detention camps in Guantanamo Bay, Cuba. He was wrong.

And now, in the aftermath of myriad bloody rampages across the country, he is once again betting that another distinctly American piece of conventional wisdom – that totally unfettered gun rights supersede any effort to address the 30,000 U.S. gun deaths every year – is nearing collapse.

There is some evidence, albeit slim, that the President may be right. There are, to be sure, plenty of guns in America – almost half the civilian firearms in the world. And in recent years, gun sales have risen considerably. But the number of people buying guns has declined. The gun lobby's rhetoric, for so long defined by the spectre of a totalitarian government forcibly gutting the Second Amendment, has helped create a very specific type of customer: the stockpiler.

And as fewer Americans buy more guns, more Americans bear witness to the carnage those guns often wreak. The gun debate may be contentious, the rhetoric heated and shrill, but the long-term trajectory increasingly casts the gun lobby, at least if it maintains its current stubbornness, as an abettor of slaughter.

Either way, Mr. Obama has little left to lose. It will all soon be someone else's problem. If a Democrat becomes the next president, they will likely face pressure from voters to do more on the issue. And if it's a Republican who next occupies the White House, Mr. Obama's gun-control efforts will likely join a whole host of policies from the past eight years destined for the bonfire.

But there's something else – another reason for the President to spend his last year fighting a battle he may not be able to win. Something personal. As he readies to relinquish control of his presidency to the scrutiny of historians, Mr. Obama's meagre gun-control measures at least afford him a sliver of moral comfort – a chance to look back and say that, when faced with a national plague so violent and indiscriminate that it once forced him to eulogize 20 murdered first-graders, at least he didn't do nothing. 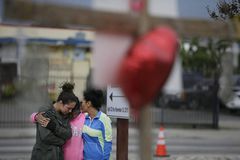 Guns in America: While ownership falls, sales remain strong
March 12, 2015
Follow Omar El Akkad on Twitter @omarelakkad
Report an error Editorial code of conduct
Due to technical reasons, we have temporarily removed commenting from our articles. We hope to have this fixed soon. Thank you for your patience. If you are looking to give feedback on our new site, please send it along to feedback@globeandmail.com. If you want to write a letter to the editor, please forward to letters@globeandmail.com.
Comments