It happened so quietly it was easy to miss: On Jan. 1, something called the Eurasian Economic Union – a free-trade zone consisting of Russia, Belarus and Kazakhstan – lurched into being. Tiny Armenia joined a day later.

The long-planned launch of the EEU, stretching from the edge of the European Union to the heart of Central Asia, was supposed to be a crowning achievement for Russian President Vladimir Putin. It was to be the day that the former republics of the Soviet Union drew a little closer together, and a little tighter into Moscow's (and thus Mr. Putin's) orbit.

But while Mr. Putin's televised New Year's Eve address to Russians to struck a celebratory note – calling 2014's "return" of Crimea "a landmark in national history" – he made no mention of the Eurasian project that had for years been seen as a centrepiece of the country's foreign policy. The Kremlin's vast media empire also said little about the first days of the EEU.

That silence reflected how hollow the moment was for Mr. Putin. For a decade, he had been the driving force behind the idea of "Eurasian integration," a phrase many saw as code for re-establishing Russian hegemony over much of the old USSR. But the Kremlin's hopes that the EEU would give it the economic and cultural influence to again stand on even footing with Washington, Brussels and Beijing collapsed last February, when the old regime in Ukraine was ousted by pro-Western revolutionaries.

The EEU without Ukraine is little more than another name for what already existed. Russia, Belarus and Kazakhstan have together been members of a Customs Union since the start of 2010, and a Single Economic Space since 2012. At the birth of the EEU, Russia accounted for 80 per cent of the new group's population, and more than 85 per cent of its combined gross domestic product. Adding the three million citizens of Armenia (and the 5.8 million residents of Kyrgyzstan later this year) won't change much.

If anything, the authoritarian leaders of Belarus and Kazakhstan – unnerved by Mr. Putin's adventurism in Ukraine – are working to loosen their ties to Moscow, fearing the Kremlin may decide to stir up trouble among ethnic Russians in their countries next. Neither country has been willing to join Moscow's side in its sanctions war with the West, and Russian suggestions that the EEU share a common currency, and unify customs, border and defence policies, have been pushed down the road.

As the ruble plummets and the Russian economy tumbles into recession, its neighbours want less, not more, integration.

"We cannot be dependent on only one or 1 1/2 markets," Belarus President Alexander Lukashenko said hours before the EEU was officially born. "Yes, Russia is our brother, our friend. But you see how they behave lately." Kazakh President Nursultan Nazarbayev – piqued just this autumn when Mr. Putin publicly wondered whether Kazakhstan was really a state – has been just as lukewarm.

The bald truth is that the EEU needed Ukraine's 46 million citizens and borders with Europe to become something new and significant. That's why Moscow worked so hard to prop up Viktor Yanukovych's pro-Moscow government, and why the Kremlin lashed out so fiercely when the regime collapsed in flames last year.

In the eyes of Mr. Putin and his coterie, the revolution in Kiev was never about Ukrainians deciding they wanted a new government; it was about the United States and Europe deciding to keep Russia weak. It was a CIA plot, inspired by "Russophobia."

And so Mr. Putin sent his "little green men" – elite Russian troops with their insignia removed from their uniforms – into Crimea to stage-manage the referendum on the peninsula and its two million residents leaving Ukraine to join Russia. Mr. Putin also stirred up the rebellion in eastern Ukraine, providing weapons, money, troops and even giving a name to the cause of "Novorossiya."

On those fronts, Mr. Putin can claim to have scored victories. It's difficult to envisage Russia's annexation of Crimea being reversed any time in the foreseeable future. Similarly, the "frozen conflict" in eastern Ukraine looks likely to keep the pro-Western government in Kiev from joining the EU or NATO any time soon.

But despite the bravado of Mr. Putin's New Year's Eve address, the battlefield gains in Ukraine are smallish consolation prizes that came at high cost.

Mr. Putin's grand geopolitical project – a Russian-led Eurasia – is in shambles. Even in parts of Ukraine that were long considered "pro-Russian" because they voted for leaders like Mr. Yanukovych, the popularity ratings of Russia, Mr. Putin and the EEU have fallen almost as fast as the ruble.

Yes, Russia gained territory last year. But because of that "landmark," its list of friends continues to shrink. 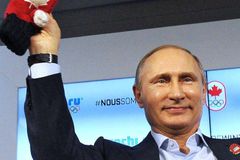 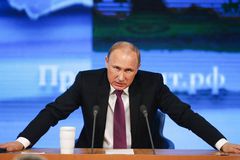 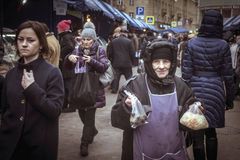