In this photo taken May 27, 2016, in the Mediterranean off the Libyan coast, rescuers help migrants to board the Italian Navy ship Vega after the boat they were aboard sunk.

Europe has been hit with another shocking reminder that it is at the centre of a refugee and humanitarian crisis that, in spite of the tentative migration deal with Turkey, shows no signs of abating and could get worse as Middle East, North Africa and, now, parts of sub-Saharan Africa displace their homeless by the millions.

Late last week, over three consecutive days, three boats capsized or sank off the coast of Libya. Thousands of asylum-seekers were rescued, mostly by the Italian Navy, but hundreds didn't make it. On Sunday, the United Nations refugee agency, UNHCR, said that at least 700 had drowned. The number could rise as bodies are retrieved and firsthand accounts of the disasters are collected by the International Organization for Migration, the Geneva-based agency that keeps a grim tally of the deaths.

According to the IOM, the number of migrant arrivals by sea in the Mediterranean between the start of January and May 25 was 194,611. That's more than double the number in the first five months of 2015.

The IOM estimates that, so far, 1,475 died through May 25 of this year trying to reach Greece, Italy, Spain and Cyprus. The fatality figure through May of last year was 1,828.

While the number of fatalities is down, the surging arrivals number delivers an ominous warning that more marine disasters are to come as more boats are launched from the Libyan beaches. The central Mediterranean route, from Libya (and occasionally Egypt and Tunisia) to Sicily, Lampedusa and other parts of southern Italy are particularly deadly because of the long distance and routinely rough water.

"What we are seeing is not an emergency in the terms of numbers," said Federico Soda, director of the IOM's Mediterranean office in Rome. "It is an operational emergency, since thousands of people are risking their life at sea and it is very difficult to save everyone."

The IOM said 10,000 lives were saved between Monday and Wednesday alone in the Channel of Sicily. The stories are by now familiar, but still heartbreaking, confirming that the Libyan smugglers and traffickers care nothing about the safety of their clients, who are stuffed into small, rotting boats – sometimes at gunpoint – with faulty motors, little fuel and almost no room for fresh water and food. Mass drownings are routine but are not the only cause of death. Witnesses said that, on Wednesday, seven passengers died on a small boat en route to Lampedusa, most likely due to engine-fuel spills. Among the dead was a Nigerian mother travelling with her nine-month-old daughter. The baby survived.

Italy fears that the Turkish deal with the European Union, in which Turkey sends one legal refugee to the EU in exchange for every illegal refugee picked up by Turkish police boats in the Aegean Sea, will convince tens of thousands of desperate Syrian refugees to try to enter Italy from Libya. So far, it hasn't happened; through April 30, Italy reported that only 26 Syrian nationals had landed on Italian soil. But that could change as the Syrian ceasefire breaks down, along with the Geneva peace process. The Mediterranean smuggling networks have proven to be endlessly creative and ruthless.

The bigger risk to Greece and Italy, which together have seen almost 200,000 migrant arrivals through the end of May, is the collapse of the EU-Turkey deal. The EU and Turkish President Recep Tayyip Erdogan have agreed to disagree on several aspects of the deal. Mr. Erdogan wants visa-free travel into the EU for Turkish citizens, but the EU says that would be conditional on the protection of civil rights in Turkey. So far, Mr. Erdogan has said the condition is not acceptable.

Cost is another big factor. The Middle East news site Al-Monitor recently reported that the Syrian refugee crisis is probably costing Turkey $500-million (U.S.) a month (Turkey alone is supporting 26 refugee camps along the Turkish-Syrian border). Al-Monitor says it calculated the figure based on public statements by Mr. Erdogan and the head of Turkey's Disaster and Emergency Management Authority.

While the figure could be somewhat exaggerated, there is no doubt that Turkey's refugee spending has climbed enormously since 2011, when the Syrian civil war started. Since then, more than half of Syria's prewar population of 22 million has been displaced. Turkey's refugee camps reportedly house 2.75-million Syrians. More friction between Turkey and the EU is inevitable if Turkey demands extra financial assistance from the EU. 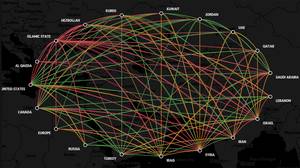 Read Patrick Martin and Jeremy Agius's interactive guide to the region's web of relationships amid the conflict in Syria and the battle against Islamic State.

Meanwhile, Libya remains a shambles. Until a stable national government is in place, the human smugglers and traffickers will operate with impunity. Potential armies of refugees could come from Kenya, where the government has vowed to close Dadaab, the world's biggest refugee camp. It is home to about 330,000 refugees, though the real number could be much higher, most of them Somalis. If they are forced to return to Somalia, there is no doubt some of them will make the long trek north, to the Mediterranean, as thousands of Nigerians have done.

For Europe, there is no pretty picture, at least in the near term. With Syria burning, Libya out of control, the Turkish-EU refugee deal on the verge of unravelling and the Dadaab refugee camp on its way out, the refugee crisis seems set to intensify.