Rags dipped in vinegar apparently provide some relief against the effects of tear gas. Or at least that was the advice one Egyptian revolutionary offered his counterparts in Missouri on social media this week.

Among some people living in parts of the world where violent confrontation between demonstrators and armed authority figures is commonplace, the ongoing unrest in Ferguson, Missouri has taken on a nickname – the American Spring.

In scale, brutality and bloodiness, the Ferguson protests in no way compare to the massive, in some cases years-long strife in places such as Egypt or Bahrain. Nor is the St. Louis suburb, despite the comparisons of some observers, anywhere near as violent or unstable as the war zones of Iraq or Afghanistan.

That's why it has been especially jarring for Americans to see many of the hallmarks of those and similar conflicts echoed nightly in Ferguson. In response to a groundswell of protest against the police shooting of Michael Brown, an unarmed 18-year-old black man, police forces have seen fit to introduce the visual language of counterinsurgency to a midwestern U.S. suburb.

As several U.S. veterans have noted in the past week, some of the police officers deployed in Ferguson have at their disposal better versions of the rifles, body armour and military-grade vehicles that U.S. soldiers carried into the battlefields of Iraq and Afghanistan. Images of these heavily militarized police officers approaching protesters present a sharp juxtaposition – the protesters with their hands up, the soldiers decked in camouflage, with assault rifles raised. They have also prompted pointed questions – for example, why do officers need forest camouflage in an urban setting?

And, in recent days, there has been added to this wartime visual language the trusty staple of virtually all Arab Spring protests, the tear gas canister. In the past two days, police have made frequent use of the lung-burning weapon, in large part to disperse crowds (police have also used smoke canisters for the same purpose). The gas itself is vile, its effects immediate. On Monday night, the flashpoint altercation between police and protesters involved glass bottles (and, allegedly, Molotov cocktails) thrown at police by demonstrators who refused to clear a road. In return, the police employed tear gas, smoke bombs and the piercing wail of Long-Range Acoustic Devices – also known as sound cannons. For the duration of this and many other less chaotic altercations over the past few days, the military-grade rifles – so far not fired – remained raised, pointed at the crowd.

"At the end of this, they're going to class us as insurgents," said one Ferguson protester in a live TV interview late on Monday night. He barely managed to get that sentence out before he had to be pulled out of the way of a militarized police vehicle that came barrelling down the road.

(After a relatively sluggish first few days, the biggest news networks in the U.S. have turned their attention squarely on Ferguson. CNN axed its pre-scheduled programming to focus on the demonstrations. In a shift of tone, its correspondents – likely agitated from being tear-gassed and given confusing, sometimes contradictory instructions as to where they can and can't stand – have started taking a more critical tone in their description of the police presence and strategy.)

The peripheral scenery of wartime is also plainly evident in the images coming out of Ferguson. Reporters, many of them veteran war correspondents, carry gas masks and bullet-resistant vests. Observers from Human Rights Watch are on the ground. For the first time ever, Amnesty International has sent a delegation to monitor events in a location within the U.S.

(In a sublime piece of geopolitical schadenfreude, the Egyptian foreign ministry issued a statement on Tuesday announcing that it too was monitoring the events in Ferguson, and calling for restraint.)

Although the causes and grievances differ, the driving force behind the Ferguson and Arab Spring protests share the same two-part dynamic: a specific, extreme incident sparks a much wider mass movement to vent years of built-up frustration. In the Middle East, a Tunisian street vendor set himself on fire out of despair, prompting what would eventually become a massive uprising against a decades-old tradition of authoritarian rule. In Ferguson, a white police officer shot an unarmed, 18-year-old black man dead, and now a community rages against the systemic racial injustices they believe created an environment where such a thing could happen.

Despite the killing of Michael Brown, despite the semi-militarized response and despite decades of pent-up frustration, the protests in Ferguson remain overwhelmingly peaceful. Whether that remains the case, given the escalation of recent days, remains to be seen.

It also remains to be seen exactly how the Ferguson protests will come to an end. In the Arab Spring, protests often reached their early, cathartic apex with a singular victory for the demonstrators – the resignation or removal of an authoritarian leader, for example. The analogy in Ferguson may well be the laying of charges against the police officer who killed Mr. Brown.

But beyond those early victories, the demonstrations tended to peter out slowly from a case of dual fatigue – the first kind by the demonstrators themselves, exhausted from the work of continuous protest, and the second from those in the community who become less and less tolerant of the upheaval that comes with revolution, and as a result more tolerant of any measure to end it.

Should Ferguson follow the same trajectory, the residents of the St. Louis suburb may well soon see some kind of short-term victory – be it charges against the officer who shot Mr. Brown, or a drawdown of the militarized police presence in the city. But if the Arab Spring is any guide, the prospect for deeper, more systemic change as a result of the Ferguson protests may be decidedly dim. 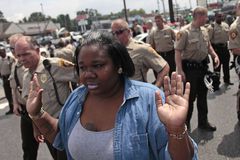 Opinion
Why the chaos of Ferguson would be far less likely in Canada
August 18, 2014

Bullet wound to arm may have occurred when Michael Brown put hands up: pathologist
August 19, 2014 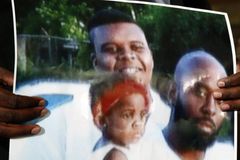