To Arabs, he was the most reviled of all Israeli figures, known as "the butcher." But to Israelis, Ariel Sharon was, with the possible exception of Israel's founder David Ben Gurion, the most beloved of their leaders.

Israelis saw something of themselves in this larger-than-life fighter, hero, provocateur, avenger. He reflected the national mood. Whatever the country thought it needed at any particular time, he was the one who did the job, even when it was a dirty one no one else wanted.

But he was no visionary. As Ze'ev Chavets, Menachem Begin's spokesman once said of Mr. Sharon, "In more than 50 years in public life, he never uttered a thought larger than 'Charge!'" He was a born trouble-shooter.

Just as many hockey teams have an enforcer, a guy to do the dirty work and beat up on the opponents so the rest of the team can do their jobs without fear, Mr. Sharon was Israel's enforcer – the kind of guy you'd hate to have fighting against you, but you love it when he's on your side.

An enterprising hit-and-run specialist in the 1948-49 War of Independence, Mr. Sharon fought in the running battles for the roads to Jerusalem during which he was seriously wounded.

After the war, he was pressed back into duty by Mr. Ben Gurion himself to head a special commando group called Unit 101, charged with responsibility for carrying out reprisal attacks on Palestinian fedayeen who were launching raids into Israel. It was a license to terrorize.

The Arab resistance fighters were taking a toll on Israeli morale and Mr. Sharon's job was to strike terror in the hearts of the Arabs. The motto was 10:1 – for every one of ours you kill, we'll kill 10 of yours. Whenever an attack was carried out against Israelis, Unit 101 struck back with raids into Jordanian-controlled and Egyptian-controlled territory.

One 1953 reprisal attack into a Palestinian village in Jordanian territory led to the deaths of more than 60 people, many of them women and children.

In Operation Black Arrow in 1955, launched because a fedayeen had killed a single Israeli cyclist outside the Gaza Strip, the Sharon unit stole into the strip one night and attacked Egyptian army headquarters outside Gaza City's train station. They killed 37 Egyptians, while losing eight of their own.

It was a national humiliation for Egypt, something Gamal Abdel Nasser said he never forgot.

Condemned by the international community for such excessive violence, even Mr. Ben Gurion was pressured to drop Mr. Sharon. He chastised the avenger in public, but privately promoted him.

Mr. Sharon commanded a unit in the Suez war of 1956 with several kills to his credit and few Israeli losses, and commanded an armoured division in Sinai in the 1967 war.

In the pivotal 1973 Yom Kippur War, when Israel stood at the brink of defeat, Mr. Sharon disobeyed orders and crossed the Suez Canal into Egyptian territory helping secure the ultimate victory.

For a country that had been scared within an inch of its life, his actions were embraced not condemned. The picture of him standing by the canal with a bandaged head became the national symbol of victory.

In politics, Ariel Sharon adopted the cause of the Israeli settlers seeking to colonize the occupied West Bank. In those days, the government of Yitzhak Rabin wanted to stop the expansion of settlements, but Mr. Sharon secretly helped the settlers evade Israel's military patrols. He was the hero of the Gush Emunim (Bloc of the Faithful) settler movement, in sharp contrast to how the organization would view him 30 years later.

Elected a Likud Member of Knesset, Mr. Sharon was appointed Menachem Begin's agriculture minister and charged with responsibility for expanding the settlement enterprise in the West Bank, this time in full public view.

Later, as defence minister, he plotted the 1982 invasion of Lebanon as an effort to wipe out the Palestine Liberation Organization that was then based in and around Beirut. Mr. Sharon drove Israeli forces right into the heart of the Lebanese capital, far further than was officially planned. And he turned his back when the Christian Phalange group took command of the Palestinian refugee camps of Sabra and Shatila.

Mr. Sharon was the one believed to have been responsible for falsely linking the assassination of Phalange leader Bashir Gemayel to the PLO and an Israeli commission found him personally responsible for the deaths of hundreds of Palestinians in those camps as a result of Phalange reprisals.

Disgraced, he would ultimately resign as defence minister, only to return to office under the administrations of Yitzhak Shamir and Shimon Peres, and then under Benjamin Netanyahu, whom he succeeded as leader of Likud in 1999.

During those years of disgrace in the 1980s, Mr. Sharon purchased a house in the Muslim Quarter of Jerusalem's Old City – a highly provocative act. The house, draped in the blue and white Israeli flag forms an archway over the busiest street in the Arab district.

Finding its door ajar one day in the early 1990s, I stole inside to see what the place looked like. The main floor was lined with TV screens showing pictures from cameras monitoring streets throughout the Old City; a gang of plain-clothed security personnel filled the room. Mr. Sharon seldom stayed there, but he left his mark.

Determined to assert Israeli supremacy in Jerusalem, Mr. Sharon led a parade of several hundred followers onto the Temple Mount and the al-Aksa mosque sanctuary in September, 2000, incensing the Palestinian community and helping trigger the second intifada.

He was reviled by the world for what he did, but Israelis elected him prime minister the following year.

Had he moderated his views to appeal to a broader swath of Israelis? The truth was, Mr. Sharon hadn't moved left, the country had moved right. Once again, Israelis were afraid and they turned to the enforcer to give them security.

Then, seemingly out of the blue, Mr. Sharon had an epiphany of sorts. He embraced the concept of an independent Palestinian state and sought a unilateral withdrawal of Israelis from Gaza.

"To hold 3.5 million Palestinians under occupation is, in my opinion, a very bad thing. It cannot continue forever," he told a Likud gathering in May, 2003. "Do you want to remain, forever, in Jenin, in Nablus, in Ramallah, in Bethlehem, forever?" he asked. His Likud party audience was stunned by the extraordinary remarks.

Over the objection of most of the settler community that once had declared they would die for him, Mr. Sharon pulled out from Gaza and from four settlements in the northern West Bank.

Like Yitzhak Rabin before him, Mr. Sharon became a marked man in the eyes of the Israeli extreme right. Deserted by many in his cabinet, he resigned from the Likud and founded a new party, Kadima.

The party was on the verge of winning office in January, 2006, when its leader was felled by a stroke. 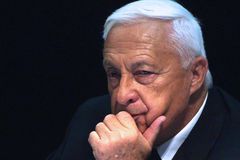 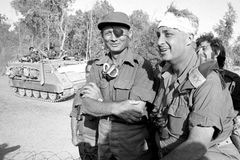