The prime minister is perhaps weeks away from being deposed. Huge numbers of people are preparing to descend on the capital in competing protests this Saturday. The army is preparing to mobilize large numbers of troops.

Thailand has been simmering for months. But the country is now closer to an eruption of violence than at any other time since the protests of 2010, when some 91 people died, some of them shot in a temple by government troops.

The latest crisis took flight late last year, when anti-government protests began to rise in Bangkok. Those protests, though they lasted for months of regular marches through the city, failed to achieve their goal of deposing Prime Minister Yingluck Shinawatra. So critics have switched their attention to the courts, which Ms. Yingluck's supporters say are in the arms of her opponents.

This week, the Constitutional Court of Thailand unanimously agreed to hear a petition that would remove Ms. Yingluck from office over a seemingly minor offence – demoting the former head of the country's National Security Council.

In Thailand, that qualifies as sufficient grounds to potentially pull a prime minister from office, and the court's eagerness to hear the case makes her opponents appear near victory.

But for Thailand, "victory" has time and again proved an illusory concept. Power has swapped hands many times, including in some 11 coups (seven more were attempted), since the country formally adopted constitutional democracy in 1932. So any ascension to the top ranks of Thai politics is doubtful to prove durable.

More worrisome, however, is that achieving such victory over Ms. Yingluck this time carries with it a significant risk of violence. As rancour has built in Bangkok in opposition to the prime minister, her own support base has been unusually quiet. That has been, in part, a deliberate strategy to legitimize her power. Supporters wanted to see an election – which they got, on Feb. 2, with ballots cast decidedly in Ms. Yingluck's favour – and they wanted to see its results honoured.

So long as that happened, they were prepared to stay quiet.

Now, however, that may be all about to change. And that means some of the warnings that have emerged from Ms. Yingluck's support base, commonly called the red shirts, suddenly need to be taken far more seriously. In early January, I travelled to a small redshirt radio station in northern Thailand. It was a startling introduction into the depth of feeling that now appears set to emerge.

If opponents find a way to unseat Ms. Yingluck, the station director told me then, "you will see an expressing of emotion in a way that's never been seen before in Thailand," he said. "We are ready to fight in all forms. It can be with weapons. We won't fight bare-handed any more."

That response has, so far, been kept suppressed by the trappings of a functional democracy. But those trappings are now perilously close to dissolving.

Thailand's constitutional court is "elevating its status from mere opponent of politicians to the enemy of democracy," Verapat Pariyawong, a prominent Thai lawyer, wrote recently. "Once the people loses faith in the highest court of the land, they are more likely to take matters into their own hands, even if that comes with violence and anarchy." 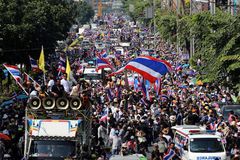