There's this thing that happens when Ban Ki-moon speaks: His words, which look so powerful on paper, lose their force the moment he reads them out loud.

It happened on Thursday, as Mr. Ban tried to tell the world that it needed to end the spreading "hell" that is the war in Syria. It happened again on Friday as the eighth United Nations Secretary-General, who will stand down at the end of this year, tried to lay out his legacy to a roomful of UN supporters gathered in the very building – the Central Hall in Westminster – where Trygve Lie was elected the first UN secretary-general in 1946.

In both cases, people, hushed to hear Mr. Ban speak, found themselves leaning forward to try to understand what he had just said. Inevitably, a few gave up. Toward the end of his hour-long remarks on Friday, many of those around me inside the Central Hall were pecking away at their smartphones, looking up only when they heard applause from those still tuned in.

It feels unfair to point this out about Mr. Ban, a 71-year-old career diplomat whose heart is undeniably in the right place. He's charming up close, and I have little doubt that he can bring the house down, and make people care, when speaking his native Korean (French officials complain that his French – which his résumé also claims he speaks – is even harder to understand than his English).

But his troubles speaking English, or another major international language, too often undermine what Mr. Ban is trying to say. In a world where politics is often a battle of short TV clips, vines and gifs, the ability to deliver an attention-grabbing sound bite matters enormously. People won't turn the volume down on other things just so they can hear you.

The real issue, though, isn't Mr. Ban's elocution. The bigger problem is how someone so obviously uncharismatic ended up leading something as crucial as the UN.

The easy answer is to blame former U.S. president George W. Bush. The tale told in the corridors of the UN in 2007, shortly after Mr. Ban was plucked from the South Korean foreign minister's office to be Secretary-General, is the same one told by UN types today: Mr. Bush strongly disliked Kofi Annan and the moral suasion the UN had gained under the leadership of the deep-voiced Ghanaian, who shared the Nobel Peace Prize in 2001 with what the Nobel Committee called a "revitalized" UN. Mr. Annan had the temerity to call the 2003 U.S.-led invasion of Iraq what it was – he used the word "illegal."

When it came time to choose the next secretary-general, Mr. Bush was determined to see someone close to Mr. Annan's polar opposite in the job. Mr. Ban is as awkward at the podium as Mr. Annan was a natural. He avoids big pronouncements on the legality of, say, various parties dropping bombs on parts of Syria. The Korean is as focused on internal UN reform as Mr. Annan was keen to insert the organization into geopolitics (while, as the oil-for-food scandal revealed, paying sparse attention to internal governance).

Though Mr. Ban was originally considered a long-shot candidate for the post, he had U.S. backing from the start – in no small part because he had supported sending South Korean troops to Iraq.

But the more systemic problem didn't go away when Mr. Bush left office. Mr. Ban's selection was also backed by China and Russia. Once the club of three veto-wielders (Britain and France generally follow the U.S. lead) decided on a candidate back in 2006, the acquiescence of the rest of the UN was a forgone conclusion.

"China insisted that it was Asia's turn, the U.S. quietly agreed with China on Mr. Ban as the most inoffensive Asian candidate, and Russia didn't mind as long as it wasn't an Eastern European," Mr. Annan's former spokesman, Edward Mortimer, told The Guardian newspaper in 2014. "The choice was left, in effect, to just three people – George W. Bush, Vladimir Putin and Hu Jintao."

And thus "the most inoffensive" candidate wound up leading the UN, an organization founded 70 years ago with a mandate to curb leaders like Mr. Bush, Mr. Putin and the Communist Party of China.

It's hard to imagine how the planet might be different if the UN had been led by another Kofi-esque figure over the past 10 years. It's impossible to guess what a more forceful secretary-general could have done to halt the march to multisided war in Syria or developments in Ukraine that were reminiscent of the 1930s.

But there are few who would argue that the world is a better and safer place today than in 2006.

In his Central Hall speech, which was hosted by the British chapter of the United Nations Association, along with the Chatham House think tank, Mr. Ban put a cheery spin on his almost 10 years in the post that Mr. Lie warned successor Dag Hammarskjöld was "the most impossible job on this Earth."

Mr. Ban highlighted the two main achievements of his time in office – the climate-change accord agreed to in Paris in December and the 17 Sustainable Development Goals adopted last fall by the UN General Assembly (building on the Millennium Development Goals popularized by Mr. Annan) – and said he took particular pride in having used his office to promote the equality of women, as well as rights for lesbian, gay, bisexual and transgender people. All noble endeavours, well pursued.

But, Mr. Ban conceded, the setbacks outnumbered the advances. "I have seen much more frustrating and difficult, difficult issues," he said, naming Syria, Yemen, South Sudan and the stuck Israeli-Palestinian peace process as the files that troubled him most. He could have added Libya, Iraq, Ukraine and North Korea to the list of places that seem to be sliding backward.

In all those cases, Mr. Ban said the world lacked the necessary "political will" to find solutions. Left to the audience to wonder was whether it wasn't he – as UN Secretary-General – who was supposed to be mobilizing that international willpower.

No one's blaming Mr. Ban for the fact he got elected. But even those who on Friday were praising his time in office admitted they were hoping to see his successor chosen in a very different manner.

"The next secretary-general must be elected on a fair and transparent basis," said Jeremy Greenstock, the retired British diplomat who heads the United Nations Association in Brtiain. While heaping praise on Mr. Ban, Mr. Greenstock warned that the world would continue to become less stable if the UN were allowed to drift.

There is some reason to hope that the process will be more open this time around. Danish politician Mogens Lykketoft, the current head of the UN General Assembly, is attempting to end – or at least limit – the backroom deal-making by having a list of candidates published early in the process. That would shed at least a modicum of needed light on the unavoidable bartering to come between Washington, Beijing and Moscow.

Tradition suggests that the secretary-general will be a European this time around (the last was Kurt Waldheim of Austria, whose term ended in 1981), or perhaps someone from North America or Oceania. There's also growing sentiment that it's time to finally have a woman in the post. Former Croatian foreign minister Vesna Pusic, known for her gay-rights activism, and current UNESCO director-general Irina Bokova, a multilingual Bulgarian renowned for promoting Holocaust remembrance, are among the known contenders at this early stage.

"We have to have a competent person in the job – woman or man," Babatunde Osotimehin, the head of the UN Population Fund, told The Globe and Mail in an interview this week.

Mr. Osotimehin said he was "proud" to have worked under Mr. Ban.

But, he acknowledged, the world is drifting toward the very kind of conflict for which the United Nations was created – to ensure it never happened again.

To avert such a catastrophe, the UN needs a genuine leader rather than a compromise candidate. Someone who makes the world sit up and listen. 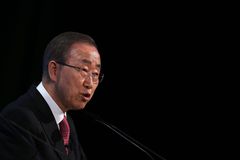 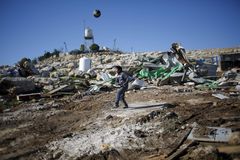