On Thursday night in Portland, Oregon, where I live, there was another protest. The demonstrators blocked a few streets downtown; they went to the Moda Center, where the Trailblazers were in a tight one with the Indiana Pacers. They were marching because another grand jury had decided not to indict another cop for killing another unarmed black man. The incident they were protesting this time happened in Staten Island, the full width of the continent away. But they were angry nonetheless – not only because of what happened, but of the underlying, centuries-old imbalances that allow such a thing to happen. It was a protest against an act but also against a system.

Last month I went to Missouri on assignment to cover the protests in Ferguson. In many ways, the events that precipitated the Ferguson protests echo what took place in Staten Island a week later in the case of Eric Garner, an unarmed black man who was killed during an altercation with police.

But beyond the raw pain and anger I saw in Ferguson, there was also something arguably more alarming – an entire urban structure built on inequality.

The first thing I did after landing in St. Louis airport in late November was go to Clayton. It's a 15-minute drive to the seat of St. Louis County, a well-manicured town of about 16,000. I went to Clayton because I heard protesters had blocked a couple of intersections downtown, but by the time I got there, the demonstration was over.

Instead I found myself wandering through Clayton's suburban backstreets and cul-de-sacs, taking in the scenery before I headed north to Ferguson. I passed row upon row of wide, stately homes. Their skin is of immaculate brick and stone, their roofs lined with terracotta tiles, their lawns littered with the autumnal shedding of curbside trees. Every new street presents at least one million-dollar stunner.

The average household income in Clayton, Missouri, is $85,000 (U.S.), almost twice the statewide average. The town is 77 per cent white. Ferguson, a 20-minute drive north, is two-thirds black and has an average household income of about $37,000. Both towns – and about 90 others – comprise the sprawling mass that is St. Louis County. That municipal kinship aside, Clayton and Ferguson may as well reside on two different planets.

Last weekend, the Globe published a story on how the Ferguson protests have become an American phenomenon, sparking a nationwide conversation on race, poverty and violence. But where there is a story about breadth, there is also a story about depth.

The August 9 killing of 18-year-old Michael Brown, an unarmed black man, by white police officer Darren Wilson left a raw laceration in St. Louis County. Beneath that wound is something much deeper, a sickness of the urban organs, decades old – a cascade of fundamental flaws in the way this place was designed.

Consider, as a starting point, an old two-storey home in north St. Louis – for the most part aesthetically unchanged today from the way it looked when it was built in 1906 – where the history of racial discrimination on America took a sharp turn.

In 1930, the Shelleys, a black family from Mississippi, moved to St. Louis. After living a while with friends and relatives, the family of eight began looking for a home. They eventually found a place on Labadie Avenue on the north side of town. There was only one problem – the home was governed by a "restrictive covenant," which was essentially a contract that, for all intents and purposes, represented a promise by white homeowners not to sell to black buyers. By partaking in such covenants, entire neighbourhoods were kept white.

Even though the owner of the property agreed not to enforce the covenant, the Shelleys faced stiff opposition from other owners on Labadie Avenue. One white couple, the Kraemers, filed a lawsuit to keep the black family out. The case of Shelley v. Kraemer eventually made it all the way to the Supreme Court. In a landmark ruling, the Court sided with the black family, marking the beginning of the end for racially motivated covenants.

The history of St. Louis is littered with instances of federal courts striking down racial restrictions on urban development. For a short period in the middle of the last century, the St. Louis metropolitan area was one of a select few in the United States that prohibited blacks from moving to any area that was 75 per cent or more white. Proponents of this segregation tried to justify it on separate-but-equal grounds, because it also banned whites from moving into majority-black neighbourhoods, but the courts weren't buying that argument because virtually no such whites existed. Indeed, for most of the last century, much of St. Louis' urban transformation has been influenced by whites trying to get away from blacks. Even Ferguson, which is now two-thirds black, started out as a white-flight suburb, populated initially by an exodus from St. Louis proper.

As the courts repeatedly struck down racial restrictions (and with the introduction of the Fair Housing Act in the late 1960s), overt racial segregation in St. Louis County began to subside. But in this county, as in so many others across the United States, the fault lines of segregation exist not along one axis but two: race and wealth. There are haves and have-nots, and the less you have, the more likely you are to be black. And while overt racial segregation is now verboten, segregation by wealth is a close and perfectly legal proxy.

As an example, she points to Ladue, a St. Louis suburb where the median income is $88,000 and the population is 94 per cent white. Like other wealthy municipalities that make up St. Louis County – there are more than 90 of them in total, more per capita than any other county in the U.S. – Ladue severely limits the construction of high-density and subsidized housing. It also requires single-family houses to be built on relatively large lots, making them, on average, more expensive. The result is the institutional, economic equivalent of a gated community, writ city-wide.

The result of these urban policies is evident in places such as Ferguson. Whereas the poverty rate in Ladue is 2 per cent, in Ferguson it is 22 per cent – and even higher for the town's black population. This discrepancy creates a cascade of consequences.

But beyond creating a sense of resentment among the citizenry, these revenue tools have direct and sometimes life-changing consequences. In a place where the median household income is about $37,500 (roughly $10,000 less than the state average), tickets often go unpaid, leading to a warrant, which in turn can lead to arrest, destroying job prospects in the process.

But there's more. In Missouri, those on parole or probation are not allowed to vote. That means a fine that started out as a financial measure for the municipality can end up as a tool of political disenfranchisement. And in a place where two-thirds of the population is black, decades' worth of this cycle are plainly visible in the hard numbers of who gets arrested and who does the arresting.

According to the Missouri attorney general, 92 per cent of police searches and 86 per cent of car stops in Ferguson last year involved black people. The difference in arrests was an order of magnitude – 483 blacks, 36 whites. The racial divide is equally stark on the other end of the power spectrum. But for one school board member and one city councillor, Ferguson's political class is white. In a police force of 53 officers, all but three are white. But for a surge in turnout during Barack Obama's two presidential runs, voting rates in Ferguson's black community are significantly lower than those of white voters. The levers of power, long ago established, are in many ways self-perpetuating.

Finally, the cascade of structural flaws presents its bloody conclusion on Canfield Drive, the residential street in predominantly black east Ferguson where Darren Wilson shot Mike Brown to death. It appears unlikely now that the details of the shooting will ever be determined in a criminal trial. But the glaring institutional flaws – the long-established fault lines of race and power – that led to this moment are plain to see. The killing may have provided the spark that ignited months of sometimes violent protests, but there was never any shortage of kindling.

In my time on assignment in Ferguson I interviewed about two dozen people who live there. I asked almost all of them how optimistic they are that, in a year's time, the protests sparked by Mr. Brown's killing will have resulted in positive institutional change. Most were optimistic that there will be at least some improvements – a police force that more closely resembles the makeup of the community it serves, for example, or at least the use of body cameras by all officers.

And yet there is a kind of resignation that when the world once again turns its eye on this Missouri suburb next August, it will find Ferguson's lacerations stitched shut, but the underlying sickness yet untreated.

The search for answers begins in Ferguson
May 12, 2018 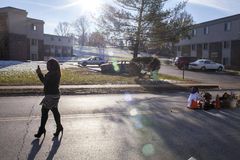 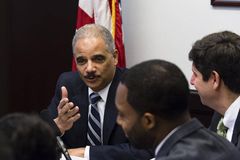