The man who started the revolt that brought down the regime of Viktor Yanukovych – an uprising that has secured Ukraine's pro-Western course, while plunging it into months of violent chaos – says his country needs another revolution, not on the streets this time, but inside the newly elected parliament.

A frustrated Facebook post last November by Mustafa Nayem, a 33-year-old investigative journalist, is credited with initiating the protests that eventually snowballed into the "Euromaidan" revolution three months later. On Sunday, the rookie politician – now a member of President Petro Poroshenko's party – was among a wave of civil society activists elected to Ukraine's parliament, known as the Rada.

Mr. Nayem said the new Rada needs to undertake rapid political reforms in order to meet the expectations of Ukrainians who are weary of corruption and falling living standards, as well as the war against pro-Russian separatists in the southeast of the country. He said the first order of business should be a law banning the private funding of political parties, in order to curb the influence of the billionaire oligarchs who have dominated Ukrainian politics for its 23 years of independence.

"It's the only way to cut the oligarchs out of the system. If you do not do that, you'll still have a competition of money inside parliament, not a competition of ideas. This is quite dangerous," he told me in an interview on the edge of Kiev's central Independence Square – better known as the Maidan – the site of the non-stop demonstrations, and the bloody final battle in February between protesters and police that ended with Mr. Yanukovych's ouster.

Mr. Nayem said that while Mr. Poroshenko is himself an oligarch – a billionaire chocolate-maker who also controls one of the country's most popular television stations – he believes that the President is nevertheless intent on political reform, and has the economic and media clout to allow him to fend off pressure from other oligarchs.

The Afghanistan-born Mr. Nayem – who rose to prominence reporting for the Hromadske television station and Ukrainska Pravda website (both of which receive funding from Western governments) – still seems amazed at the role his Facebook posting played in igniting everything that has followed.

After months of reporting on negotiations toward a trade agreement between Ukraine and the European Union, Mr. Nayem was dismayed by Mr. Yanukovych's decision last November to walk away from the deal in favour of closer ties with Russia.

His Facebook appeal for those who shared his anger to gather that night on the Maidan started three months of rolling protests against Mr. Yanukovych's rule, as well Russian interference in the country.

Mr. Nayem said that while Sunday's election – which saw pro-Western parties finish first, second and third – showed that Ukrainians still had faith in Mr. Poroshenko and his allies, they expected the politicians to work fast.

"The expectations of the people are very high. It will be very hard … to [maintain] support unless we're doing something very radical."

However, the early signs hint that politics-as-usual may instead prevail. As the final votes were being tallied on Tuesday, the Petro Poroshenko Bloc appeared to have finished second in the popular vote, less than a percentage point behind the People's Front party headed by Prime Minister Arseniy Yatsenyuk.

But Ukraine's hybrid electoral system, in which half the Rada is selected off party lists and the rest via direct constituency elections, looked likely to leave the Petro Poroshenko Bloc with 132 seats in the 450-seat Rada, to 82 seats for the People's Front.

While Mr. Poroshenko and Mr. Yatsenyuk worked together as leaders of the Euromaidan revolution, a rivalry has emerged between the two, and both on Tuesday were claiming the right to lead talks on creating a coalition government. Mr. Yatsenyuk claims the election results give him a mandate to continue as Prime Minister, while Mr. Poroshenko is believed to favour replacing him with deputy prime minister Volodymyr Groysman, a member of his own party.

After Mr. Poroshenko's office presented a draft coalition agreement to the People's Front and the third-place Self-Reliance party on Tuesday, Mr. Yatsenyuk replied by saying his party would draft its own document, and that the People's Front would investigate allying with other forces – including the party of former prime minister Yulia Tymoshenko, as well the nationalist Radical Party – if coalition talks with the Petro Poroshenko Bloc stalled.

The old-school political wrangling is a disappointment to Mr. Nayem. "Everything really changed, but so far it has changed only on the surface. Underneath, it's still the same. We have a new president, we have a new parliament, but we don't have a new system." 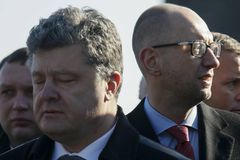 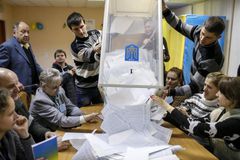