On the weekend, they lowered the flags in Kuala Lumpur to half-mast.

The Malaysian Prime Minister called for the mainly Muslim nation to pray that they be protected from misfortune. There was grief and shock, and a special session of parliament called for this coming week.

For the second time this year, the people of this stable Southeast Asian nation have been sucked into the middle of a transfixing global tragedy.

This time, at least, Malaysians can see the wreckage.

Four months ago, Malaysia Airlines Flight 370 disappeared into the night sky on its way to Beijing, leading to an anguished international search for the 239 people on board that drew in the United States and China. That horrific event – for which there has still been no closure for the people here – led to strong international criticism and embarrassment among educated and political Malaysians, who saw their coddled government exposed to withering international criticism.

After months of searching that captivated the world – and harsh words from an increasingly assertive Beijing, which deployed its naval forces in a high-profile struggle to find the lost Chinese passengers – the plane has still not been found.

Now Malaysia has been struck by yet another tragedy, one as unlikely as the first and just as horrifically unfathomable. Last week, Malaysia Airline Flight 17 from Amsterdam to Kuala Lumpur was shot out of the sky over eastern Ukraine, U.S. officials say, by a surface-to-air missile launched from occupied territory held by Russian-backed insurgents. There were 298 people on board, including 193 Dutch nationals and 43 Malaysians.

For many here, it is incomprehensibly cruel that these two separate disasters could befall their peaceful country, as well as their beloved national airline carrier, in such a compressed period of time.

"Why Malaysia? Was it something to do with our country? Was it a coincidence?" asks Yap Siew Hwa, an auditor in the Malaysian capital of Kuala Lumpur as she sat with her two children. "It's a terrible tragedy. Until now, we still have no news at all about the [first] plane. And then this latest one happened."

This time the reaction is different. With MH370, the lack of facts created an unending mélange of confusion and anguish. Though their government seemed permanently under siege as the crisis unfolded, the culprit was not entirely clear. There was no plane.

With MH17, Malaysians at least have some hard answers – they can see their national carrier's downed plane in a Ukrainian field, surrounded by rebel soldiers; charred bodies and children's toys and passports have fallen to earth. The government, rather than obfuscating and delaying responses like with MH370, has been assertive and confident as it responds to these events – and there has been less back-and-forth between supporters and opponents of Malaysia's rulers.

Last time, Malaysians may or may not have played a role in the disaster; this time, the country simply seems to be a victim crushed between larger, warring powers – their nation's plane, shot out of supposedly safe skies, when it could have been any other. Many here now worry that Malaysia Airlines, which is already in financial trouble despite praise by Malaysians who prefer it to the region's discount airlines, may suffer yet another blow to its reputation – however undeserved.

"It's really sad that it happened to us. Others fly that route," says Daniel Yoong, a 21-year-old student. "But this time, I don't feel like we're at fault."

There is also anger. Malaysian Prime Minister Najib Razak has demanded that the bodies of Malaysians be brought home, and has sent investigators to Ukraine. And even though there is still some confusion as the U.S. and its European allies press Russia on specifics, Malaysians – like others – seem to have made up their minds about who was responsible. Quoting U.S. Secretary of State John Kerry, who said the surface-to-air missiles were given to rebels by Moscow, a Malaysian newspaper's front page on Monday read: "It was the Russians."

Mainly, though, Malaysians are reeling from the truly global reach of war. As they continue to fast for the holy month of Ramadan, they have watched Israel's assault on Gaza kill innocent Palestinian civilians, even as they mourn for their own loved ones, who were caught in the crossfire of a war that seemed so far away until it wasn't. 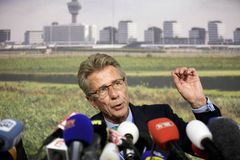