It started with the simplest of requests. "Could you help us order dinner?" I asked a man in a distant Chinese village this summer. But now, months later, a wrenching question has surfaced in my mind: could our conversation question have landed him in jail?

That question came to me on Tuesday, when a Chinese court ordered a life sentence for another man from China's distant west: Ilham Tohti, an academic and ethnic Uyghur who was found guilty of "separatism." The Uyghurs are a largely-Muslim minority with deep roots in Xinjiang, the sprawling region of northwestern China with a lengthy Silk Road history.

Its inhabitants have at times fit uncomfortably inside modern-day China, with local rebels declaring independence in 1933 and again in 1944. More recently, a loosely-defined separatist organization called the East Turkestan Islamic Movement, labelled a terrorist organization by the U.S. and China, has been blamed for knife, bomb and car attacks that have killed hundreds.

It is against this background that China has mounted an iron-fisted security response in Xinjiang, and against this background that Mr. Tohti was arrested, tried and sentenced. But his alleged crime appears to extend beyond separatism (which he and his supporters have fiercely denied promoting). In his sentencing, the court also said Mr. Tohti was "taking advantage of the international media to put pressure on China," his lawyer, Li Fangping, said in an interview this week.

In other words, to China, his crime lay partly in the fact he had spoken with people like me. I interviewed him last November.

And if he was sentenced to life in jail, what happened to the people I spoke with in Xinjiang? Mr. Tohti's sentencing brought the memory of my trip back.

I travelled there for a week this summer, looking for insights into what is fomenting tensions in the region. Any journalist who comes to Xinjiang knows there is risk, since police routinely interfere with reporting. I had taken precautions, conducting interviews indoors and at one point spending hours deep inside the house of a Uyghur man. I kept my phone powered off except at night, after registering in hotels where my passport was scanned and sent to local authorities, the standard Chinese practice. I changed hotels every night to make myself more difficult to track. I did not write down phone numbers, or even real names, for many of the people I spoke with, for fear of keeping a written record.

But in Alahagezhen, I let my guard down. The small village had been visited by ugly violence, with several people killed in a protest over restrictions on women's ability to wear veils. I had come to hear what happened, but when dinner time arrived, I also came to eat.

Xinjiang offers a mouth-watering diversity of tastes. Restaurant menus are jammed with savoury stews, crunchy naan and spiced lamb skewers. But many of those menus are written in Uyghur. Few of those who run restaurants, particularly in smaller centres, speak much Chinese.

Luckily, at the open-air restaurant in Alahagezhen, I happened to sit beside a Uyghur man who spoke fluent Mandarin. He helped me order. Then we sat chatting.

Half an hour later, a police car drove by, slowed for a look and then turned around. It parked in front of the restaurant and two officers got out. They had seen me, an obviously foreign face. Or perhaps someone had called it in. Either way, they wanted to inspect my passport, which they photographed with an iPhone and sent somewhere else. They wanted to know why someone with a journalist visa had come here.

Still seated next to me was the man who had helped me order. He had been speaking with a reporter, though since I was eating, I had not identified myself as such. Now, the police began to ask him questions, too. What had we talked about? What had he told me?

My throat grew dry. I was not particularly worried about myself: China heavily censors its own press, and attempts to restrict the activities of foreign reporters, but rarely arrests them.

Instead, I was anxious for this man. What consequences might he face for speaking to me?

In the Foreign Correspondents' Club of China guidelines for working in Xinjiang, it warns, "Expect to be followed, and anyone you speak with questioned. … Be particularly cautious of endangering Uyghur interviewees." In 2010, Uyghur journalist Gheyrat Niyaz was sentenced to 15 years in prison. His punishment, on charges of violation of state security, was aggravated by the fact that he had spoken with foreign media. Dozens of activists have faced ugly consequences for bringing China's misdeeds to the attention of outside eyes and ears. (Things are getting worse for media, too: The Foreign Correspondents' Club recently warned about a significant worsening of conditions for reporters since the 2008 Olympics; half of those surveyed said authorities had threatened or harassed their Chinese assistants.)

For China's critics, meanwhile, speaking out can have advantages: "Some dissidents believe international exposure protects them," the Correspondents' Club points out.

But Mr. Tohti's case is a startling reminder of China's determination to conduct its affairs free of foreign influence or criticism. That creates troubling problems for the outside world as it pursues deepening trade, and for journalists who seek to add to our knowledge about a country whose values often clash with our own.

I do not know what happened to the man I chatted with over dinner. After an hour of speaking with police – which included having them follow me to the bathroom – I was let go. Other reporters have since been denied entry to the village. It's unlikely I will be back. I can only hope police believed his innocence.

If nothing else, Mr. Tohti's life sentence underscores the almost unimaginable boldness of those willing to challenge official China. In a past interview, Mr. Tohti said he faced possible prison with a hope that his would be a worthy sacrifice. "To trade my humble life to call for freedom – gladly, I'd be proud to," he said.

He nonetheless leaves behind anguished loved ones. Shortly after her father's sentencing, his daughter Jewher Ilham posted to Facebook a family portrait, with a short sentence superimposed on it: "I want my family back!!!"

I wanted to know if she faulted the media for what had happened to her father.

"I don't blame the reporters," she said. "My father knew exactly what he was doing. His goal was to let people know about the real situation of the Uyghurs, and his goal was a good one."

Uyghur activist found guilty of separatism, sentenced to life in prison in China
May 12, 2018 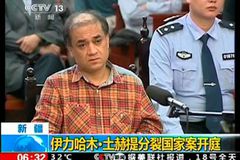 ‘Nothing wrong’ with free expression, Uyghur activist says as trial ends
May 12, 2018 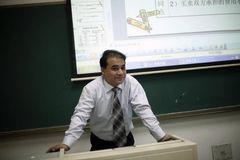 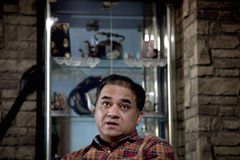 The long campaign to silence Uighur voice of dissent
May 12, 2018