It's a dilemma all revolutionaries have to face sooner or later. What do you do when the revolution is over?

That's a question now being posed at Kiev's Independence Square, or Maidan, the site of three months of protests against Ukraine's President Viktor Yanukovych. (Maidan is also a new shorthand for the protest movement). Since last December, thousands of people have stayed in the square day and night, facing off against government security forces over a network of elaborate barricades that cut off much of the downtown core. But with Mr. Yanukovych now gone, a new interim government in place and the world's attention turned to the drama playing out in Crimea, what's to become of Maidan?

"Life goes on, life has to be renewed," says Bogdan Dubas, a 57-year old former banker who is the commander of Maidan, meaning his job is to run the operation and figure out how to scale it back without losing its impact. "There is an old saying, 'there's a beginning to a revolution but there is never really an end to a revolution.' We want to break that saying."

There are signs that's already happening. The number of protesters in the square has fallen from up to 20,000 a day to fewer than 3,000. Some of the tents have been taken down and one street has been reopened to traffic. Many shops and kiosks have also opened up again and souvenir vendors line much of the area once filled with burning tires, hawking everything from posters and trinkets to Maidan calendars. Many of the barricades are also now covered with flowers and makeshift memorials, honouring more than 80 protesters who died during clashes with police.

Mr. Dubas says some of the other streets will be re-opened as well, and a few more barricades will be removed. But most of the structures will remain until the presidential elections in May, as a check on the new leadership.

There are also plans to build three permanent memorials to those who died and rename a street near the square in their honour. And Mr. Dubas and others want Maidan formally recognized as a group by parliament. Some would also like the government to set aside Nov. 21 as an annual "Maidan Day," something like an annual meeting where government leaders would come and explain their actions in the square. "The President and the Prime Minister should come to the Maidan and report. There is nothing to be afraid of in the Maidan," he says.

Mr. Dubas speaks from experience, as someone who has been on the Maidan almost from the start. He got involved in early December through his friend from banking, Stepan Kubiv, who was the Maidan commander at the time. The two quickly became partners, overseeing most of the operations of the movement which is akin to running a small city.

Relying completely on donations, the pair had to make sure there was enough food, water, plastic cups, toilets, fire wood, warm clothing, disinfectant and medicine for thousands of people. They also paid rent on seven buildings, kept the electricity flowing, covered the cost of trash collection and organized a stage and giant television screen for daily presentations. And that was before any battles with the government or police, which could disrupt supplies and change the number of buildings under management as protesters took over offices and then lost them to police.

Sitting on the third floor of a small coffee shop, which acts as his office, Mr. Dubas joked about how he explains to his 79-year old mother just what it is he does. "When my mother calls me on the phone, she says 'where are you working now?' I say I'm working in a very large factory, with 15,000 employees."

His duty now is to make sure the spirit of Maidan remains even if the structures are taken away. He also wants to ensure that many of the young people who have been in the square for months find jobs and that those who want to stay are accommodated.

For him, the Maidan has come to represent Urkaine's struggle for democracy. Much like the Statue of Liberty, "this is our symbol," he says. "This is another level of accountability and democracy."

When asked how much longer he will stay in the square, Mr. Dubas smiles and replied: "As long as the Maidan is here, I'm here. This is my job." 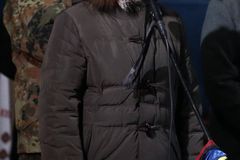 In Ukraine’s war of words, a PR machine girds for battle
March 7, 2014 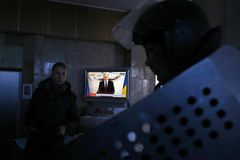 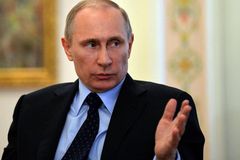