For years, it's been one of the mysteries of South Sudan: how does the country remain so poor and hungry when it receives billions of dollars in oil revenue every year?

This week the answer became clear. About $4-billion has been stolen by corrupt officials, the president says. And now he is asking those officials to give the money back, please.

The stolen funds are a large portion of the $2-billion that South Sudan has received in annual oil revenue since winning its autonomy (and later its independence) in a peace agreement with Sudan in 2005 after decades of war.

Despite the massive flow of oil wealth, this sparsely populated country of eight million people has remained among the poorest and hungriest in the world. One-fifth of its people suffer from chronic hunger. Child malnutrition rates, as high as 21 per cent in some regions, are routinely above the emergency threshold. And its rates of maternal mortality and child mortality are among the worst in the world.

The United Nations has been appealing for emergency funds to help feed South Sudan again this year. Yet now the country is admitting that much of its desperately needed revenue is simply stolen by its own top officials.

"An estimated $4-billion are unaccounted for or, simply put, stolen by current and former officials, as well as corrupt individuals with close ties to government officials," President Salva Kiir said in a letter to his officials.

Most of the stolen cash was deposited into foreign bank accounts, or used to purchase foreign property, he said.

"Many people in South Sudan are suffering and yet some government officials simply care about themselves," Mr. Kiir said in the letter.

"We fought for freedom, justice and equality. Many of our friends died to achieve these objectives. Yet once we got to power, we forgot what we fought for and began to enrich ourselves at the expense of our people."

In a bizarre twist, the president sent the letter to 75 current and former officials, pleading with them to return the stolen money. "I am writing to encourage you to return these stolen funds (full or partial)," he wrote in the letter.

He promised that any officials that returned their stolen money would receive confidentiality and an amnesty from prosecution.

Earlier this year, he also sent letters to the United States and seven other nations in Africa, Europe and the Middle East, seeking their help in recovering the stolen money.

The South Sudan government says it has already recovered $60-million in stolen funds as a result of the anti-corruption campaign this year. But this is just a tiny fraction of the stolen money. Its auditor-general reported this year that nearly $1.5-billion was unaccounted for in 2006 alone.

In another scandal in 2009, more than $2-billion in government funds went missing when bogus companies were set up to supply sorghum, a staple crop.

In a report last week, the U.S. State Department noted that South Sudan has failed to enforce its own laws on corruption, despite frequent promises by top politicians. "Officials continued to engage in corrupt practices with impunity," the report said. "Although President Kiir publicly criticized corruption, it was a problem in all branches of government…."

South Sudan's anti-corruption commission was created in 2009, yet by the end of last year it had submitted only six corruption cases for prosecution, the report said.

The country will be increasingly desperate for revenue this year. Because of a dispute with Sudan, its oil production has been shut down since January, eliminating 98 per cent of the government's official revenue. The World Bank has expressed "deep concern" about the economy, and some experts are warning of a currency collapse.

At the same time, South Sudan's humanitarian needs have been dramatically rising, with thousands of refugees pouring across the border from Sudan as a result of military clashes in the border regions.

Every day, about 2,000 refugees are arriving in South Sudan's Upper Nile State after crossing the border from Sudan, according to the relief agency Medecins Sans Frontieres (Doctors Without Borders).

In the past two weeks, about 30,000 refugees have arrived, joining the 70,000 refugees who are already in camps in the region. Many are sick or malnourished. And water shortages are getting worse at the refugee camps, despite months of warnings. "A nightmare scenario is starting to unfold," said Jean-Marc Jacobs, an MSF official.

In Sudan, the rainy season compounds fear and misery
May 22, 2012 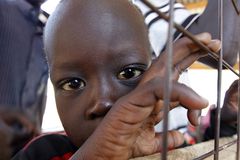