In the years before Dominique Strauss-Kahn was forced to quit as head of the International Monetary Fund in a sex scandal, his life was a whirl of meetings with some of the world's most powerful people.

It now appears, if allegations in the French media are to be believed, that he was also spending much of those days having meetings with some very different people, with names like "Dodo Brine" and "Text-Message Man."

Mr. Strauss-Kahn was taken into custody in Lille on Tuesday. He had expected to be questioned as a witness in the sex-ring investigation, but was told upon arrival that he'd be a suspect.

At the centre is a Belgian man who goes by the name of Dodo La Saumure – "Dodo Brine," a somewhat lascivious expression – and is described in Le Figaro as "King of the massage parlours." His real name is Dominique Alderweireld, and he owns a chain of establishments on the French-Belgian border that are often described as "houses of prostitution."

He was released by police on Tuesday and proclaimed his innocence – but in a way that will hardly be encouraging to Mr. Strauss-Kahn or his lawyers.

"I did not provide him with girls," Mr. Alderweireld said of the IMF boss. "Girls are independent from my place, completely. There are two girls working at my place who met DSK in Paris, period… I did not even know they were going." One of the prostitutes who "went down to this famous restaurant in Paris," he said, was his wife Beatrice Legrain.

According to court documents seen by Le Monde, the men attending these "pleasure parties" were unable to remember whether they were business or pleasure – some said they received the amorous services for free; others remember giving a small gift.

The young women were much more clear: "For the Washington trip," one woman named Florence V. recounted, "for three days [I received]2,400 euros… for the Murano, Lille and Burssels [trips] we had 1,600 euros each time for both of us." She was specific about the IMF boss: "I had these little dances with DSK that were pleasant moments that paid well."

From Le Monde's account, this sounds like a genteel sort of prostitution where everyone's just too polite to discuss money: "I often invent their role, such as a secretary, because I was ashamed of having to be with someone who was being paid," one of Mr. Strauss-Kahn's colleagues told investigators. But he concedes he was paying one of the girls, named "Jade," a systematic 500 euros per session.

But it appears that Mr. Strauss-Kahn was not paying. Rather, prosecutors' documents suggest that the companies were paying the considerable prostitution fees in order to build "a relationship that could be useful to the organization going forward," as one businessman David Roquet, assured his superiors in a memo: "In business, it is good practice for a boss to have access to the presidency … we could propose such projects as public-private partnerships."

According to an account in the Paris newspaper Libération, the recurring "soirees" were organized in the weeks after Mr. Struass-Kahn had been forced to apologize for a sex scandal, shortly after assuming the IMF presidency, in which he had an affair with a young Hungarian economist at the organization. He made a public apology to his wife and the IMF, and promised to clean up his act.

Instead, the newspaper says, the Lille businessman Fabrice Paszkowski, who was head of a medical company, became known as "l'homme des SMS" (text-message man) for the services he arranged.

He, too, was discreet about cash: "It was not good form at these 'libertine parties' to say that the girls were being paid," he told a judge on Dec. 19, according to the paper. 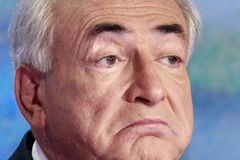