Among the missing children featured on the side of milk cartons in the 1980s was Etan Patz - a six year old boy who disappeared nearly 33 years ago, on the very first day his parents let him walk alone to the Soho bus stop en route to school.

The FBI and New York City Police Department announced Thursday that, based on new evidence, they would begin investigating a basement room in a building just blocks from where Etan's parents continue live.

After so many years, the case of Etan Patz still haunts.

"It gives me chills because I remember that date so clearly," one woman told NBC News yesterday, recalling that her 7 year old daughter would catch the bus with Etan.

"Everybody in the neighbourhood with kids after that day, that was it. No more walking to the bus stop alone."

Etan's case garnered national media attention and eventually a space on the side of millions of milk cartons.

When a campaign in the United States got under way in January 1985 to publicize the cases of missing kids on milk cartons, the national milk carton manufacturer credited an Iowa dairy company for pioneering the idea.

Anderson Erickson Dairy in Des Moines had already published photographs of missing children on the side of milk cartons - a move that would inspire a national strategy to find missing children by putting their faces at the breakfast table in millions of homes. The strategy was picked up in Canada and around the world.

Noreen Gosch's son was among the first missing kids to be featured by the Iowa dairy company.

He was a Des Moines Register newspaper boy who had been delivering papers for over a year. In 1982, the 12-year-old was doing his paper route when he went missing.

"What it did was raise the level of awareness," said Noreen Gosch, while speaking to AP this week. "It didn't necessarily bring us tips or leads we could actually use."

The Michigan-based National Child Safety Council was behind the national campaign in the mid-1980s that brought together independent dairy producers and carton manufacturers to publish photos and biographies of missing children. The council estimated that up to a 5 billion milk cartons carried photos of missing children at the height of the campaign.

The enthusiastic response of farmers and manufacturers spawned other U.S. programs, including using grocery bags, utility bills, billboards and buses to publicize cases.

Just two years after the launch of the national campaign, a quarter of the 720 milk brands that published photographs stopped.

"It's like any advertising service: As time passes, the impact of being constantly bombarded by pictures of missing children begins to wane," Galen Todd, manager of a New Jersey milk carton manager that supplied dairies in the American Northeast, told The Record in 1987.

A New Jersey supermarket chain spokesman told the same newspaper, "One of the [customer]comments that I heard was that it was rather depressing at the breakfast table to be looking at pictures of missing children."

That was not the only challenge. In the 1980s, manufacturers viewed the drug crisis as an urgent issue and began publishing drug prevention ads on the side of milk cartons.

The milk carton campaign began to fade out in the late 1980s as people began to question whether it actually helped find any missing children alive. The strategy also faded in Canada.

"What it did most was build awareness worldwide," Barbara Huggett, director of research for National Child Safety Council, told The Orlando Sentinel in 2010. "Mexico, Canada, France -- it's not just a U.S. thing; it's known all over the world."

Of the 70 missing American children featured on milk cartons, only one was found alive, she added.

The use of emergency bulletins - or the Amber Alert system - is now standard in Canada and the United States along with social media platforms such as Twitter and Facebook.

But the milk carton strategy continues to be used in other countries. In England, The Missing People charity has used milk cartons to publicize cases. In Hungary, its first-ever milk carton campaign was launched last year to raise awareness of four long-lost children. 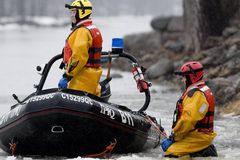 Search for missing autistic child, 3, to continue near Montreal
April 29, 2018