News that Britain had voted to leave the European Union was just a few minutes old when Aram Rawf found out what "Brexit" really means to some English voters.

The 35-year-old Mr. Rawf – who arrived in Britain 17 years ago as a refugee from Iraqi Kurdistan – works in a hotel restaurant in this town in southeast England. He was watching the television news with hotel guests early Friday morning, agape at the results, when two men walked in to the hotel and strode right up to Mr. Rawf.

"They said, 'Have you got your passport ready?' " he recounted. Mr. Rawf told the men that he now holds a British passport, but he understood their message: Many here hope and expect to see fewer immigrants on their streets after Britain quits the EU.

A spate of similar incidents have been reported around England in the first days after last week's shocking referendum, which saw 52 per cent of voters choose to leave the EU. Many accused Vote Leave politicians of stirring up xenophobia during the 10-week campaign that preceded the decision, and many voters appear to have been left with the impression that a Brexit (a mashup of "British" and "exit") would result in an immediate decline in immigration numbers, and perhaps even the deportation of some foreigners already living here.

Police were investigating messages of "Leave the EU/No more Polish vermin" – written in English and Polish – that were shoved into mailboxes around Cambridgeshire on Friday, just hours after the vote. In London, meanwhile, police were pursuing a case of "allegedly racially motivated" graffiti painted on the outside of a Polish cultural centre in London early on Sunday. The graffiti has since been washed off, and neither police nor the Polish centre would reveal what had been written.

There were many tales akin to Mr. Rawf's told on social media in recent days, usually involving people presumed to be foreigners being told to go "home." Marchers at a "victory rally" in the northeast city of Newcastle were filmed carrying banners reading #RefugeesNotWelcome.

Many who voted in favour of Brexit have said they did so hoping to curb or halt immigration from the EU, which has seen about three million EU citizens move to the U.K. – two-thirds of them since 2004, when the EU added 10 new member countries, most of them in Eastern Europe. The influx has been blamed for keeping salaries down, as Eastern European workers expect lower pay than British workers do, while driving up housing prices and putting additional strain on the public health-care system and other social services.

The Independent newspaper said more than 100 "incidents of racial abuse and hate crime" had been reported since the June 23 vote. It was not clear how many of the alleged incidents had been reported to police, but the apparent rise in hate has startled this diverse and normally tolerant country.

Sayeeda Warsi, a former chairwoman of the Conservative Party who initially joined Vote Leave, only to flip sides mid-campaign over what she called its "divisive and xenophobic" rhetoric, told Sky News on Sunday that she has heard many post-referendum stories of foreigners being stopped in the streets and told they should leave the country.

"I've spent most of the weekend talking to organizations, individuals and activists who work in the area of race hate crime, who monitor hate crime and they have shown some really disturbing early results from people being stopped in the street and saying, 'Look, we voted Leave, it's time for you to leave,'" she said. "They are saying this to individuals and families who have been here for three, four, five generations. The atmosphere on the street is not good."

Mr. Farage, leader of the far-right U.K. Independence Party, was roundly criticized for "dog-whistle" politics during the referendum, including his use of a poster that showed streams of refugees marching into central Europe, with the words "breaking point" superimposed over the photograph.

Many blame the toxic atmosphere of the campaign for the June 17 murder of Jo Cox, a Labour MP and outspoken advocate for refugees who was shot and stabbed near her constituency office by an assailant who allegedly yelled "Britain first" during the attack. 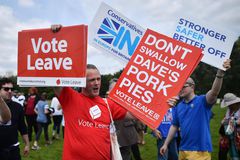