There was a time when all of Ukraine hung on what Yulia Tymoshenko had to say. A decade ago, she was a key leader of the Orange Revolution; the woman many hoped would finally drag their country west toward the European Union.

But on Friday, with Ukraine's future again dangling in the balance, it was hard to find a television in Kiev that was tuned in as Ms. Tymoshenko tried to use a final presidential election debate to convince Ukrainians that she was also relevant to their latest uprising, which toppled the pro-Russian government of Viktor Yanukovych in February, but left the country without an elected leader.

Trailing badly in race to fill that void, Ms. Tymoshenko pleaded Friday for voters not to grant outright victory to front-runner Petro Poroshenko, who polls show is approaching the 50 per cent support needed to win the vote on Sunday without a second-round runoff.

The presidential election comes amid multiple crises in Ukraine, including the Russian annexation of Crimea in March and escalating fighting between the national army and pro-Russian fighters in the southeast. Many Ukrainians say they will support Mr. Poroshenko on Sunday, not because he is their favourite candidate, but because they do not want to see the election and the surrounding instability drag on for three more weeks until a second round of voting.

"The countries that hold only one round of elections tend to be dictatorships. I am sure that today we will have two rounds of elections, and they will be democratic ones," Ms. Tymoshenko said in the debate, pointing her hands forward toward the cameras she has always been naturally aware of. Her famous charisma was diluted by a voice hoarse from weeks of desperate campaigning.

Russian President Vladimir Putin appeared Friday to ease the pressure he has been applying on Kiev since Mr. Yanukovych was ousted, saying his government would "work with" the winners of Ukraine's election. The Kremlin had previously suggested that it might not recognize the winner of the vote.

But Mr. Putin also declared that Ukraine is now in a "full-scale civil war" and he repeated his call for Kiev to cease military actions against the separatists and instead negotiate with the leaders of the unrecognized "people's republics" in Donetsk and neighbouring Lugansk. At least seven people were killed in fighting in the Donetsk region on Friday, a day after 18 Ukrainian soldiers were killed in the army's biggest setback to date.

Ms. Tymoshenko attacked Mr. Putin personally throughout Friday's debate, saying that while she had once had "respectful" relationship with him while both were prime ministers, the Russian leader risked becoming a "political corpse" if he defied Western sanctions and continued to meddle in Ukraine. She predicted that Russia would be the country that eventually collapsed, allowing Ukraine to regain Crimea.

It was vintage Ms. Tymoshenko, though few appeared to be watching or listening. Her tumultuous decade on the political scene has bred fatigue among many voters. Some opinion polls suggest that Ms. Tymoshenko may have less than 10 per cent support – still clearly in second place among the 21 candidates on the ballot, but perhaps 30 points or more back of Mr. Poroshenko.

While the other main pro-Western candidate, former boxing champ Vitaly Klitschko, gave way early to the seeming inevitability of Mr. Poroshenko's win (Mr. Klitschko is running instead for mayor of Kiev on Sunday), giving up has never been Ms. Tymoshenko's style.

Some here believe that if Ms. Tymoshenko can deny Mr. Poroshenko a victory on Sunday, she could yet pull off a surprise in the second round.

"I think there will definitely be two rounds of elections," said Taras Berezovets, a political analyst and director of the Berta communications consultancy in Kiev.

Mr. Berezovets predicted that – propelled by the get-out-the-vote ability of her Fatherland party – Ms. Tymoshenko would win upward of 20 per cent in the first round, and do even better in a runoff against Mr. Poroshenko.

"I believe that Tymoshenko can win. She still has a lot of cards to play," Mr. Berezovets said.

He said that one of Ms. Tymoshenko's advantages is that she is seen as a firm supporter of Ukraine joining the North Atlantic Treaty Organization – an increasingly popular idea as tensions with Russia grow – while Mr. Poroshenko has wavered and suggested that seeking membership in the military alliance might fan pro-Russian feelings and further divide Ukraine.

Another wild card is the situation in the southeastern regions of Donetsk and Lugansk, where pro-Russian separatists have vowed to prevent Sunday's election from taking place. If a deal can be struck to open the polling stations for a second-round vote, that's millions of extra votes that Ms. Tymoshenko – who hails from the eastern city of Dnipropetrovsk – can try to court.

The 53-year-old has long sought the presidency, but buried her ambitions during the 2004 Orange Revolution that brought her pro-Western ally Viktor Yushchenko to power. In return, Mr. Yushchenko made Ms. Tymoshenko his prime minister.

Those who worked inside the Yushchenko-Tymoshenko administration say Ms. Tymoshenko was never happy in the No. 2 job, and waged a power struggle against Mr. Poroshenko, who headed the National Security and Defence Council, that persuaded Mr. Yushchenko to fire them both.

That sort of infighting cost Ms. Tymoshenko in 2010 when she ran for the presidency and narrowly lost to Mr. Yanukovych, with many disgusted "Orange" voters defecting to support the pro-Russian politician. Mr. Yanukovych – who was toppled in February by the pro-Western uprising – won 49 per cent of the vote in a second-round runoff, to 45 per cent for Ms. Tymoshenko.

This time, Ms. Tymoshenko has even greater challenges to overcome. Asked about he candidacy, many Ukrainians simply reply, "Yulia had her chance."

Meanwhile, Mr. Poroshenko – who hails from central Ukraine – is seen as the fresher face despite his own long career in Ukrainian politics. (He is aided by his television station, Fifth Channel, which has helped portray him as both a self-made billionaire and a hero of the revolution against Mr. Yanukovych. Fifth Channel rarely reminds viewers that Mr. Poroshenko was briefly a minister in Mr. Yanukovych's cabinet.)

Ms. Tymoshenko was once counted alongside Mr. Poroshenko as one of Ukraine's powerful oligarchs, having made a fortune in the 1990s via a company that imported Russian gas to Ukraine. She has been dogged by corruption allegations throughout her political career, and was in prison when the Maidan uprising began on charges widely seen as political punishment for her opposition to Mr. Yanukovych.

Twelve stories that help explain the crisis in Ukraine
May 23, 2014
new
Crisis-weary Ukrainians look to end election quickly
May 23, 2014 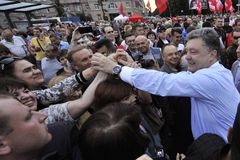