An outbreak of the mosquito-born Zika virus linked to serious birth defects has sparked panic in pregnant women and consternation in governments scrambling for a way to respond across Central and South America. The epidemic has also opened new space for debate about reproductive rights in conservative countries still dominated by the Roman Catholic Church.

On Monday, the World Health Organization declared Zika a public-health emergency, and called for a co-ordinated international attempt to control mosquitoes and find a vaccine.

The chief public-health response of governments in five countries affected by Zika is to urge women to avoid getting pregnant.

Yet, across Latin America, 60 per cent of pregnancies are unplanned; countries telling women to avoid having babies are some of the same ones where women have the least knowledge of or access to contraception, face the highest rates of sexual violence and have no access to safe, legal abortion.

"Our Health Minister says unbelievable things – telling women to avoid pregnancy, saying there will be a generation of retarded babies, that 'we lost the battle against the mosquito' – but he won't pronounce the word abortion," said Debora Diniz, an activist for reproductive rights and law professor at the University of Brasilia. "This will go on the agenda because of pressure from society."

The most extreme case in the Americas is El Salvador, where nearly 40 per cent of babies are born to teenage girls, and where women suspected of having terminated pregnancies (and even many who miscarry) face criminal prosecution and jail sentences of up to 40 years.

"It's fine to recommend to prevent pregnancies, but they are not taking into account the reality of many women in El Salvador, those who don't have access to contraceptive methods," said Morena Herrera, a member of the Feminist Collective in San Salvador. "Women encounter resistance [when they seek birth control] that comes from public health-care providers and from the church."

Monica Roa, a lawyer in Bogota who helped bring a court challenge that in 2012 won Colombian women the right to terminate pregnancies in cases of rape, fetal abnormality or a severe threat to a woman's mental or physical health, said the Zika crisis has created a rare opening to advance a reproductive rights agenda.

"We're getting in touch with other organizations, recognizing that this is a big crisis, a tragedy and an opportunity," she said in a telephone interview. "Given the situation in El Salvador, for example, what are women going to do? Are we going to see an increase in the rate of unsafe abortion that leads to an increase in maternal mortality? Or an increase in prosecutions of women having illegal abortions? Or a generation of microcephalic babies – who knows what the consequences will be? … We will have to start documenting, litigating and it might help with the debate.

"But I would be more excited if the cost women have to pay wasn't so high," she added.

The Colombian government said on Jan. 30 that 2,116 cases of Zika have been reported in pregnant women, and the Health Minister has said the stress of being infected with Zika while pregnant was sufficient grounds to imperil mental health. But Ms. Roa said that sounds better in theory than it is in practice, since many health-care providers do not understand this, or do not provide abortion, which is still highly stigmatized.

Juliana Cano Nieto, deputy director of campaigns for Amesty International in Mexico and Central America, said rape is a major concern. "You can tell a certain percentage of women to plan pregnancy, but if you are in a situation of sexual violence, with no possibility of planning anything – then what do you do?" In Central American countries racked by gang violence, she noted, a great many women are in coercive sexual relationships – "chosen" by a gang leader as a sexual partner, for example – and have no say in controlling pregnancy.

"I don't see the government telling men anything – they are not telling men what they can do to prevent the Zika virus," she added.

Ms. Roa in Colombia said the Zika epidemic can provide a "reality check" in the abortion debate. "Sometimes, in the abstract it is hard for people to understand why [access matters]." But with a sudden proliferation of pregnant women who are poor and facing a microcephaly diagnosis, however, it becomes more clear why choice matters, she said.

Abortion is a complicated choice for pregnant women infected with Zika, since the brain defects that cause microcephaly can be diagnosed only at the end of the second trimester, at the earliest. Jesseir Coelho de Alcantara, a judge in the central Brazilian state of Goias, has incited a furor by saying he would authorize termination of pregnancies of fetuses with microcephaly who unquestionably would not survive gestation to birth – but medical experts are divided on whether it is even possible to make that kind of assessment of a fetus with what some are now calling "fetal Zika syndrome."

In Brazil, abortion is illegal except in cases of rape, incest, mortal threat to a pregnant woman's life and anencephaly (a fetus that will be born without a brain.) While an estimated one million women in the country terminate a pregnancy each year, public opinion surveys show 80 per cent of Brazilians nevertheless believe abortion should be illegal.

And while Judge de Alcantara has become the inadvertent spokesperson for the subject of reconsidering the parameters, his larger view is clear: "I'm against decriminalizing it. I believe abortion has to remain a crime."

Prof. Diniz noted that Brazil's conservative Congress is considering bills that would remove even the exceptions to the current abortion law.

She and colleagues are now at work on a case to take to Brazil's Supreme Court (which tends to be more progressive than Congress) to try to use Zika to broaden the law – arguing not, as with her anencephaly challenge, that carrying a microcephaly fetus is undue suffering, but rather on the basis of women's right to health and social security, guaranteed in the constitution, but abrogated by government in the case of this epidemic.

"Even though it's horrible, this is a new door for us to argue on the rights of women," she said. "In the case of infection by Zika, women must be free to decide if they want to keep the pregnancy." 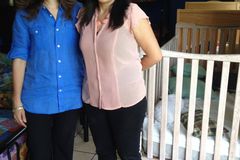