Despite mounting pressure from Zimbabwe's military and its ruling party, President Robert Mugabe has stunned the nation with a rambling and confusing speech that failed to include any mention of his resignation.

Tens of thousands of Zimbabweans mobbed the streets of Harare on the weekend in massive rallies to support the military takeover and to demand Mr. Mugabe's resignation. On Sunday, he was sacked by the central committee of his ruling party. Yet he remained defiant on Sunday night, clinging to the last vestiges of his power.

The full story of what brought Mugabe down, and why he didn't see it coming

On Monday, Zimbabwe's ruling party ZANU-PF  expressed confidence Mr. Mugabe could be impeached within two days, while the world's oldest head of state ignored the party's midday deadline to resign.

Mr. Mugabe, the only ruler Zimbabwe has known since its independence from white-minority rule in 1980, has brought his country into poverty and chaos over the past 37 years. After last week's military coup, he was widely expected to announce his resignation in a televised speech to the nation on Sunday night. But instead he made no mention of quitting.

Mr. Mugabe's speech seemed delusional. He insisted that the coup has not damaged his authority, and he said he will preside over a conference of the ruling party next month – even though the party's central committee has dismissed him as leader.

In his speech, flanked by senior military officers, Mr. Mugabe praised the army commanders and conceded that they were correct in their concerns about the ruling party and the government. He acknowledged that there was "victimization" and "cliques" in the ruling party. He admitted the government's "inattentiveness" to the economy, which was going through a "rough patch." But he did not announce the resignation that had been predicted by many media outlets just hours earlier.

Mr. Mugabe, 93, is the world's oldest president and the longest-ruling dictator in Africa. He came to power as a liberation leader after a guerrilla campaign against white-minority rule in the former Rhodesia, but quickly used his power to crush dissidents in a campaign that killed an estimated 20,000 people in the early 1980s. In recent decades, his regime has rigged elections, seized white-owned farms, sent the economy into collapse and impoverished millions of people.

The new president is expected to be Emmerson Mnangagwa, a former vice-president and spy chief who was sacked by Mr. Mugabe two weeks ago.

In its meeting on Sunday, the central committee of the ruling party decided unanimously to dump Mr. Mugabe from its leadership. It also decided to appoint Mr. Mnangagwa as its new leader and its nominee to replace Mr. Mugabe as president. The committee wants the decision to be rubber-stamped by a full conference of the party in mid-December, but there is little doubt that the decisions are final.

Obert Mpofu, a cabinet minister who chaired the party meeting on Sunday, said the decision to dismiss Mr. Mugabe was a "historic moment" but a sad one.

"We meet here today with a heavy heart," Mr. Mpofu said. "He has been our leader for a long time, and we have all learned a lot from him."

He cited the huge crowds at the weekend rallies. "The people have spoken," he said.

The central committee also expelled Mr. Mugabe's widely disliked wife, Grace, from the party, along with 19 cabinet ministers and other party members who support her faction. The committee called them a "wicked cabal."

The committee members cheered noisily, whooped, danced and sang as they celebrated their decision to dismiss Mr. Mugabe from the party leadership. Some members made a "crocodile" gesture with their hands as they danced – a reference to their new party leader, Mr. Mnangagwa, who has been nicknamed "The Crocodile" since his days as a guerrilla fighter in the 1960s.

Mr. Mnangagwa has strong support from the party's biggest faction, which has been feuding with Ms. Mugabe's faction for years.

Analysts say he is likely to introduce economic reforms in a bid to attract international loans for the country. But he has a long history of using the military and secret police to crush dissent. In the 1980s, he was Mr. Mugabe's right-hand man in the bloody campaign to destroy dissidents in the Matabeleland region.

While the military and the ruling party continue manoeuvring to find ways to oust Mr. Mugabe from the presidency, the people of the country left no doubt of their hostility to him on Saturday.

For the first time in decades, Zimbabweans are free to say what they really think about Robert Mugabe. And on Saturday, they seized the opportunity with wild enthusiasm, turning their capital city into an exuberant carnival of anti-Mugabe expression.

Tens of thousands of demonstrators, perhaps as many as 100,000 in total, filled the streets of Harare with a noisy celebration of Mr. Mugabe's demise. They danced, partied, drank, marched, cheered and sang. They even tried to march into Mr. Mugabe's official residence to send a stronger message to him.

At the end of it, nobody could doubt that this was the political obituary of the autocrat who has ruled Zimbabwe for nearly four decades. He still holds the title of President, but his power has vanished.

Astonishingly, not a single police officer was visible at any of the anti-Mugabe rallies that erupted across the city. For the first time, Zimbabweans were completely free to insult their President and to jeer the ruling party. Many of them did both.

"Rest in peace, Robert Mugabe," one protestor shouted. "We're not your personal property."

Others carried a full-sized cardboard coffin, emblazoned with his name. "Resign now," their placards read. "Mugabe must go."

They burst into thunderous ovations for any passing soldiers or armoured vehicles, voicing their gratitude to the military for putting Mr. Mugabe under house arrest.

Until now, political demonstrations have always been crushed or harassed by thuggish police and intelligence agents who routinely arrest and assault protestors. Their absence from the streets, and the sudden freedom of political expression, was proof that the ruler has been toppled.

Huge crowds of demonstrators, filling many city blocks in a seemingly endless mass of people, marched to the edge of State House, the presidential headquarters in Harare, to send a clear message to Mr. Mugabe to step down. They pushed past a few soldiers who tried to halt their march several blocks from State House. Only a reinforced military presence prevented them from bursting into the building itself.

"The repressive era is over," said Tawanda Marimbi, a 38-year-old college lecturer who joined the crowds at the anti-Mugabe rallies. "From today, Zimbabwe is a free country."

The Globe in Zimbabwe: Country faces difficult road ahead in search for democracy
November 16, 2017 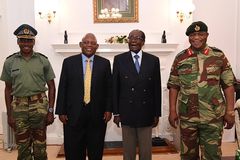 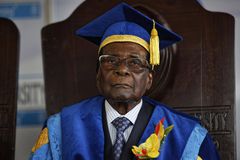 Tens of thousands march to celebrate Mugabe’s downfall, demand his resignation
November 18, 2017
Follow Geoffrey York on Twitter @geoffreyyork
Report an error Editorial code of conduct
Due to technical reasons, we have temporarily removed commenting from our articles. We hope to have this fixed soon. Thank you for your patience. If you are looking to give feedback on our new site, please send it along to feedback@globeandmail.com. If you want to write a letter to the editor, please forward to letters@globeandmail.com.
Comments