The mood was far from celebratory when the world's leading physicists came together in 1927 to discuss the revolutionary new theory of quantum mechanics. The group photo features a glum Albert Einstein in the front row. Even Max Planck, the father of quantum theory, looks sad.

Why all the long faces? Quantum physics would reshape our understanding of the atomic and subatomic world and lead to fame and acclaim for those who advanced it, including the two scientists – one French, the other American – who won the Nobel Prize for physics this week. Why did some of the greatest scientific minds in history not embrace it?

In his new book, The Universe Within, theoretical physicist Neil Turok provides the backstory. Einstein and his colleagues were struggling to come to terms with evidence that nature is surreal, he writes.

Deep down, its basic constituents "don't behave like particles or billiard balls or masses sliding down planes, or weights on springs or clouds or rivers or waves or anything anyone has ever seen in everyday life."

It would take 70 more years for physicists to appreciate fully the "immense opportunities" offered by quantum physics. Dr. Turok's book – the basis for his series of Massey Lectures, which began this week in St. John's – is an attempt to help non-scientists appreciate that potential.

Dr. Turok is also the director of the Perimeter Institute for Theoretical Physics in Waterloo, Ont. But even such a gifted thinker and communicator has difficulty, he admits, in explaining quantum physics without using equations.

"Quantum physics is one of the hardest things to understand intuitively, because essentially the whole point is that our classical picture is wrong," he tells The Globe and Mail. "The world is not made up of particles and waves and beams of light with a definite existence. Instead, the world works in a much more exploratory way. It is aware of all the possibilities at once and trying them out all the time. That is a hard thing to picture."

Ultimately, he says, physics is about the human mind making sense of the universe, on a scale from one-billionth the size of an atom to 10 trillion times the size of the solar system.

With his book and lectures, he says, "my goal is to get people thinking and trying to wrap their heads around the amazing things that have been achieved and to dream about what will be achieved."

Quantum physics has already revolutionized the way physicists think. "We had to give up any notion of being able to picture things as they really are, or of being able (even in principle) to measure and predict everything there is to know," he writes.

"These ideas had to be replaced with a more abstract, all-encompassing theory which reduced our capacity to 'know' or 'visualize' reality, while giving us a powerful new means of describing and predicting nature."

As Dr. Turok says, the classical physical laws of Isaac Newton were developed by thinking about the motion of planets, and they led to a vast number new technologies, from bridge-building to the steam engine – the underpinnings of the Industrial Revolution. With all of their abstraction, you might think that quantum physics' practical applications were limited by comparison.

Yet Dr. Turok says it has already given us so much. "Quantum physics forms the foundation of chemistry, explaining how molecules are held together. It describes how real solids and materials behave and how electricity is conducted through them. … It enabled the development of transistors, integrated circuits, lasers, LEDs, digital cameras and all the modern gadgetry that surrounds us.''

But that is only the beginning. Quantum electronics will be "infinitely more powerful, subtle and interesting" than what we have now, Dr. Turok says. "A quantum computer will make our laptops look like abacuses."

Dr. Turok's is an optimistic worldview, and it is one that he credits to his parents, anti-apartheid activists in South Africa who were jailed and forced to leave the country, but are now back in their homeland. His father, at 84, is a member of the South African parliament.

"They are my inspiration. They believed it would change. If your ideas are right, and you are consistent and don't give up and keep pressing, those ideas will work."

The family lived in Tanzania for several years before moving to London, where the young scientist earned his doctorate at Imperial College. He has held prestigious posts at Princeton and Cambridge and in 2008 took over as director of the Perimeter Institute.

Started in 1999 by Mike Lazaridis, the founder of Research in Motion (maker of the BlackBerry), the Institute has become a destination for top physicists from around the world, including Stephen Hawking.

There, they tackle some of the most fundamental questions in science: How are all the particles and forces in nature interrelated? What happened at the Big Bang? What is the nature of the mysterious dark matter and dark energy that makes up much of the universe?

Dr. Turok also founded the African Institute for Mathematical Sciences, which now has branches in South Africa, Senegal and Ghana and trains top students from across the continent. The project is also known as the Next Einstein Initiative.

At the heart of it is a prominent theme in Dr. Turok's writing – the importance of outsiders, such as electrical pioneer Michael Faraday, who was the son of blacksmith and left school at 13 to become a bookbinder's apprentice. Many of the big names in physics were oddballs and eccentrics as children, and our education system needs to make room for that kind of creativity to flower, he says.

Dr. Turok knows that some people remain skeptical of science and fearful of where it is taking us. He is concerned about what he sees as a growing disconnect between science and society, in part because advances in quantum physics and other fields are increasingly difficult for non-scientists to grasp.

Some of these discoveries trigger the discomfort that comes with letting go of what we thought we knew, which is perhaps the emotion that the photographer captured in the glum faces of Einstein and other top physicists attending that 1927 conference.

But he argues that everyone can gain from a deeper appreciation of the universe, and our ability to comprehend it.

"I think it is hugely motivating for people to think about the future at whole new level. I believe physics can play a role in motivating people, and giving them hope and ambition for the future."

Neil Turok's Massey Lectures will be broadcast on CBC radio beginning on Nov. 12.

Finding the next Einstein in Africa
November 12, 2011 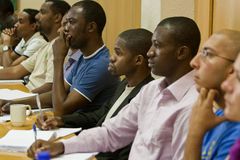 Stephen Hawking gets rock-star welcome at Canadian think-tank
June 20, 2010
Follow Anne McIlroy on Twitter @AnneMcIlroy
Report an error Editorial code of conduct
Due to technical reasons, we have temporarily removed commenting from our articles. We hope to have this fixed soon. Thank you for your patience. If you are looking to give feedback on our new site, please send it along to feedback@globeandmail.com. If you want to write a letter to the editor, please forward to letters@globeandmail.com.
Comments