Where most saw a predator aided by a network of enablers, Greer, 79, had an uglier take last month: Weinstein's victims had "spread [their] legs" to advance their careers.

I'm Zosia Bielski, a Globe and Mail reporter who's been writing about gendered violence for nearly a decade. For weeks, we've heard rumblings of a backlash against #MeToo. Even as the movement remains in its infancy, some have worried that #MeToo has already gone too far, that it's an overzealous court of opinion persecuting innocent men.

Much of the resistance has come from men unwilling to take a closer look at a sexist hellscape women have long traversed solo. But it is the women denouncing #MeToo who have been particularly discomforting to watch.

Greer isn't alone. In a controversial interview with Quillette last month, Samantha Geimer claimed #MeToo glamourizes victims' pain. Geimer, who was raped by director Roman Polanski when she was 13, urged women to focus instead on "survival." The 54-year-old author lauded the #TimesUp movement as more a proactive force to end sexual violence.

Also in January, 100 prominent French women including actor Catherine Deneuve, 74, signed an open letter in which they complained that #MeToo is puritanical. "Rape is a crime," the letter read, "but insistent or clumsy flirting is not an offense." And in The Guardian, actor Susan Sarandon, 71, downgraded Weinstein's behaviour to lousy "seducing."

Many observers see an intergenerational catfight playing out between young women who get it and older women who are painfully out of touch. But that's not quite the case. In "Aziz Ansari Is Guilty. Of Not Being a Mind Reader," New York Times editor Bari Weiss took aim at Grace, an anonymous 23-year-old who accused Ansari, a comedian, of being sexually coercive on date. Weiss criticized Grace for her passivity, arguing that she'd reduced #MeToo to "an emblem for female helplessness." Weiss is 33.

This fight is about much more than young versus old. Nor has one camp always behaved more admirably than the other. Witness writer Katie Way, who first shared Grace's account on the feminist website Babe.net: After an older journalist criticized her story, Way disparaged the woman's appearance in a nasty, ageist e-mail.

To me, the most advanced critiques go beyond the words women hurl and ask why they are fighting. Writing in Artforum, playright Ariana Reines described her "colossal dismay" at older feminists slagging #MeToo. She saw "the sorrow of women who are so ruined themselves by this whole structure that ... their response to a younger person's act of courage is jealousy."

Women in this third camp are exhibiting more empathy toward each other. They can see that the current outpouring of #MeToo may feel removed for some older women who suffered quietly through sexual abuse and workplace harassment because it was the norm when they were coming of age.

"It's understandable they'd feel alienated by the current cultural change," actor and activist Martha Plimpton offered in a compassionate series of tweets. "But time marches on. What one child withstood in lashings the next child learns to reject as abuse. This is progress. What happened then does not have to keep happening now. But let's not [dump] on our elder women artists who are proud of what they endured."

Most recently, division has raged over Rose McGowan, who alleged she was sexually assaulted by Weinstein and included detailed accusations in her new memoir, Brave. The former actor has been a polarizing figure in #MeToo, attacking female power players in Hollywood for alleged complicity with Weinstein. At a book reading earlier this month, McGowan also erupted in fury at a transgender woman who criticized her for glossing over the sexual violence inflicted upon this marginalized community.

For many feminists, McGowan has proved to be a challenging voice – a survivor who doesn't utter the right words. A few women have piped up for her, though. Their words are food for thought.

"If we extend compassion only to the survivors of sexual violence we consider ideologically pure or well-behaved," Scottish feminist author Claire Heuchan wrote, "we have lost something of our own humanity."

McGowan found another unlikely ally in transgender advocate Maia Monet, who implored abused women to support each other. "Attacking [McGowan] for her blind spots is how you turn a potential ally into an enemy," Monet argued in this nuanced piece from the Daily Beast. "You take a wounded animal and back it into a corner, the results aren't going to be pretty."

A wounded animal. The real reason women are lashing out at each other right now isn't age or ideology. It's misplaced pain.

While researching a story on widowhood, I discovered the gripping work of true crime writer Michelle McNamara. She died unexpectedly at 46, leaving her husband, comedian Patton Oswalt. For several years, McNamara had been rigorously investigating the unsolved case of a California serial killer who evaded capture after raping more than 50 women and killing at least 10 people throughout the 1970s and 80s. McNamara believed he was still out there and penned him this haunting letter, recently excerpted in the New Yorker from her book I'll Be Gone in the Dark: One Woman's Obsessive Search for the Golden State Killer, set to be posthumously published later this month. McNamara writes with paralyzing intensity. "She wanted him to be locked up. She was close to figuring it out," Oswalt told the New York Times in this ardent tribute. "I was married to a great crime fighter." – ZB

Barbara Stewart had heard it all. As a portfolio manager in Toronto just after 2009's financial crisis, she'd come across every disparaging reason why women weren't good with money. Women just weren't interested in investing, women were too scared to put their dollars in the stock market, women didn't understand finance.

"The message was horribly negative… I had been in the industry so long and I knew women were very capable investors because I had had them as clients," says Stewart, a Chartered Financial Analyst who'd been working in finance for nearly 20 years at the time.

Stewart, now 56, realized that there was a real need for positive stories. So she set out to tell a few. In 2010, she launched what she called Rich Thinking, a report focused on women and finance. In the first year, she commissioned a survey of 1,000 Canadian women and shared the findings. Since then, the report's format has evolved. Stewart starts with providing context on a particular topic (one year it was building financial confidence in women, another it was how women are shaping the future of the financial industry). Then she shares the personal stories of women she's interviewed. Annually, Stewart talks to 50 women from around the world for Rich Thinking. "The collection of women takes on a life of its own every year," she says.

Distribution is largely tied to her global network, and as a speaker and educator in 30 cities worldwide, for banks, stock exchanges, academic institutions and companies, it's an impressive one.

But Stewart's goal isn't just sharing positive stories. She also wants to challenge and dismantle misleading stereotypes, for example, that women are "risk averse." Rather, she says, they are risk aware. In her next report, due out this March, Stewart looks at women in high-risk professions – from a stuntwoman to a spy to an air traffic controller – and explores their approaches to financial risk.

Another misconception Stewart is breaking down: Women lack confidence when it comes to investing. Stewart's take? Women are "competent, but not over confident." Competence is more important than confidence, she says, because it's what actually gets positive financial results. And she can see that women are competent, based on their "actual, investing behaviour."

"I've not only observed it first hand as a portfolio manager but in the women I've met through my research. They could have three MBAs and say they're not good enough but if you watch their behaviour, they're excellent." – Kiran Rana

Amplify: What happens when we experience – and report on – trauma
January 26, 2018 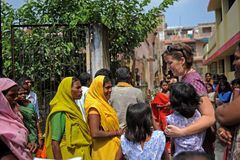 Amplify: We’re stuck in our echo chambers with no way out
February 2, 2018 Amplify: Women in sports need more of the spotlight – and I hope to help
February 9, 2018 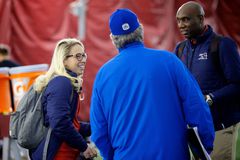