Admire or dislike him, Prime Minister Stephen Harper works like a fiend. He controls the government utterly and totally dominates the headlines. His idea of relaxing was to write a serious book in what little spare time he allows himself, on a part of hockey's history.

Mr. Harper's hours are long, but he certainly has stamina. Just think about the past three or four weeks: The annual trip to the Arctic, with the many attendant announcements and photo ops. A trip to Europe for the North Atlantic Treaty Organization summit. A pitch for Canadian business in London.

Jet lag be damned, he returned to Canada, where in short order he spoke at an event in Quebec City, basked in an Ottawa ceremony for the Franklin expedition discovery and flew to Toronto for a Ukrainian fundraising dinner, the unveiling of the Aga Khan Museum and a meeting with a senior Coptic church leader, speaking at each event.

Then it was back to Ottawa for a rhetorical whoop-up with his caucus as the House of Commons returned. Wednesday, there's the visit of Ukrainian President Petro Poroshenko. And so on, and so on. The guy works a killing pace.

Between and among all these public events are a myriad of details of government business that pass through his hands, because everything of importance, and much that is not so important, is decided by him. He would have been deeply involved behind the scenes in Finance Minister Joe Oliver's announcement about small cuts to EI premiums, since these cuts form part of the Conservatives' re-election strategy, which is being directed by Mr. Harper.

No wonder the Prime Minister's Office has grown so much. Organizing all these events takes stunning amounts of time and effort. Everything Mr. Harper does is choreographed in advance. There's absolutely nothing spontaneous. A whole lot of people have to do a whole lot of work before each and every Harper event, and we can't even guess how much staff and bureaucratic work goes into the annual trip to the Arctic.

Everything is presidential in style and substance. Occasionally, a minister is allowed to say something on the big stage – usually the finance minister or the foreign affairs minister. The others are mute, or consigned to say things locally.

Not for the first time, Canadians are seeing a Prime Minister who, after many years in office, begins to find foreign affairs more interesting and time-consuming than he expected upon entering office. Think of Pierre Trudeau, Brian Mulroney, even Jean Chrétien – the longer they stayed, the more intrigued and preoccupied they became. So it is with Mr. Harper, who had barely travelled outside Canada before becoming leader of the opposition. As Prime Minister, he now finds himself spending lots of time on foreign policy, and he appears to like it, especially when it's treated as an outgrowth of domestic electoral politics.

The next election will serve as a referendum on Mr. Harper, who will be presented as a strong leader in turbulent, ominous times against the callow Justin Trudeau and the ideological Thomas Mulcair. Canadians' attitudes toward Mr. Harper will eclipse any other aspect of the election.

All prime ministers dominate their governments, for such is the nature of the friendly dictatorship our federal government has become. But in previous governments, Liberal and Progressive Conservative, you could count a reasonable number of powerful and public ministers to share at least a bit of the limelight.

Now, there are two or maybe three ministers with modest public profiles in the government. Everything rests on the shoulders, presence and reputation of Mr. Harper, whose work habits, persona and desire for maximum control make him even more the focus of attention than his long-serving predecessors.

He is a deeply polarizing figure, as prime ministers often are after many years in office. He knows, because he has long practised this kind of politics, how to galvanize those who admire him and his approach.

These admirers are not the majority of Canadians, but he obviously thinks that there are enough of them that, properly galvanized by him and his ubiquitous presence, he will win again. 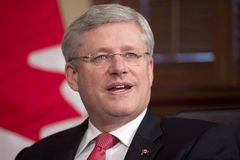