Have you heard the one about the stand-up comic and the lesbian? Actually, it's not that funny. A lesbian walks into a place called Zesty's and she and her friends order some beers. It's comedy night, and a string of stand-up comics are doing their routines for a half-empty house. One of the comics thinks the women are being rude, loud and disruptive during his act, so he fires back. (Insert crude, unprintable language here.) Insults fly. One of the women throws a couple of glasses of water in his face. He grabs her sunglasses off her head and squashes them in his hand. The end.

Well, not quite. A few months later, the woman lodges a complaint with the B.C. Human Rights Tribunal, alleging discrimination and harassment. This week - nearly three years after the event - the tribunal began hearing the case, even though it's unclear whether it has the jurisdiction to do so.

"It's been three years of shite," says Guy Earle, whose comedy career is currently on hiatus. "I didn't think being an asshole was illegal in this country."

That may depend on whom you choose to insult. The complainant, Lorna Pardy, says she has suffered injury to her dignity, feelings and self-respect. She claims to be suffering from post-traumatic stress disorder, and has become moody and isolated. In short, she says her life was ruined from that night on. She is seeking damages in the range of $20,000.

Perhaps you see a potential problem here. If human-rights tribunals can go after foul-mouthed stand-up comics, then we'd better close the comedy clubs. Then there's the Internet. Lots of foul-mouthed assholes there, too.

Mr. Earle is not the only party named in this complaint. There's also Zesty's Food Services, along with its owner, an Iraqi immigrant named Salam Ismail. Ms. Pardy charges that Zesty's discriminated against her in the provision of a service - i.e., stupid, tasteless comedy. Her tribunal-appointed lawyer has made strenuous efforts to show that Mr. Earle was an employee of Zesty's. (Actually, Mr. Earle was not an employee of Zesty's, and was paid in beer.) Mr. Ismail can't afford a lawyer, so his brother, Sam, is representing him. "We have to stand for our rights," says Sam. "We're not going to give in."

Business has fallen off at Zesty's, which is now known as Zawa. Sam blames the bad publicity. "You have to be gay-lesbian friendly in this area or else you can't have a business." The restaurant is so gay friendly, it used to play host to gay and lesbian comedy nights. Some in the gay community have boycotted the restaurant since the incident, but others, Sam says, have been calling to express their support.

For many enterprises, human-rights complaints have become a racket. The respondent must pay all his own legal costs, while the complainant pays none. It's far cheaper to settle than to fight, so that's what most respondents do. They also, quite understandably, want to avoid the reputational damage. Yet, even if the complainant goes away, they lose.

Take the case of John Fulton, owner of the Downtown Health Club for Women in St. Catharines, Ont. He was the target of a human-rights complaint launched by a man dressed as a woman who demanded to join the women's gym. The case dragged on for years until the complainant dropped it. By then, Mr. Fulton's legal bills were well into six figures, with no chance for reimbursement.

It's not clear whether the B.C. Human Rights Tribunal should even be hearing the Pardy case. The B.C. Supreme Court told it to first reconsider several legal matters, including whether a comedian is a service provider and whether the service-provision section of the provincial human-rights act can be used to circumvent the free-speech guarantee enshrined in the Charter of Rights and Freedoms. The tribunal, however, chose not to examine these points before it heard the case. That prompted Mr. Earle's lawyer, Jim Millar, to walk out.

"I've practised for 30 years and never been in a situation quite like this," he told the tribunal Monday. "You can't put these people through it for three years and not even make a decision concerning your own jurisdiction. … It's an abuse of process." On Thursday, he filed a notice of motion asking that the tribunal be held in contempt of court for breaching the rules of justice.

Mr. Earle, who's 41, has also boycotted the proceedings. He stayed home in Georgetown, near Toronto, with his wife and infant son. Comedy is really a sideline for him. He has a degree in physics and, in his day job, he's employed by a firm that makes thin-film optical filters. "The point of stand-up comedy is that you can say whatever the hell you want on stage," he says. "It's the sharp end of a free society."

Next week, the tribunal will reconvene for the wrap-up arguments. The only lawyer in the room will be the one acting for Ms. Pardy. Mr. Ismail will once again be represented by his brother.

"I blame the tribunal more than the person who is complaining," says Sam. "They should have had better judgment before spending thousands of dollars on a silly stupid case like this."

Mr. Millar, Mr. Earle's lawyer, remains adamant that human-rights tribunals have no place in the stand-up comedy clubs of the nation. Let the audience render judgment. "It's the marketplace of ideas," he says. "That's why they invented the word 'boo.' " 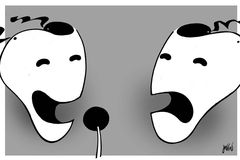