Hossein Derakhshan writes about new media and Iran at hoder.com and is working on an art project titled 'Link-age' at the New Media Society in Tehran.

Last November, I walked out of an Iranian jail after six years. The most shocking news I learned after that? It was not President Barack Obama's acknowledgment of Iran's right to peaceful nuclear technology, nor the death of NDP Leader Jack Layton, nor the abrupt disappearance of the Canadian embassy in Tehran. It was the death of the Web as I knew it.

In late 2000, I had immigrated to Canada, and from a small rental apartment in Toronto, I democratized writing in my homeland – through introducing, facilitating and promoting blogs.

Right after the tragic terrorist attacks of Sept. 11, 2001, I found myself reading online personal diaries to see what that day meant to Americans. I used to be a tech journalist in Iran, and blogs could help me reconnect with readers of my popular daily column in a reformist Iranian paper. I started my own blog and assisted many of my readers in Iran and abroad to do the same.

A year later, blogging became as trendy in Iran as today's hipster beard; I was called the blogfather. Even the state media was cherishing it.

Back in Tehran in December, 2008, I was escorted to court in a car. This was a month after I was arrested for, in short, my Internet activities. On the car radio, I heard about a blogging contest called the Scent of Apple to commemorate Imam Hussein, the grandson of Prophet Mohammed and a central figure to Shia Islam. I was a smiling, proud blogfather that moment.

Six years later, in November, 2014, I was pardoned by Ayatollah Khamenei and freed from Evin Prison. Ever since, I have come to realize that what I dedicated many good years of my youth to is gone: Most bloggers have moved to social networks, turning the Iranian blogosphere into a graveyard.

Worse is that Mark Zuckerberg proves not to be a fan of links, or hyperlinks. On Facebook, he doesn't encourage you to link. On Instagram, he has simply forbidden them. He is quashing the hyperlink, thereby killing the interconnected, decentralized, outward network of text known as the World Wide Web.

Facebook likes you to stay within it. Videos are now embedded in Facebook, and soon the outside articles will be embedded, too, with its Instant Articles project. Mr. Zuckerberg's vision is of an insular space that gets all our attention – and he gets to sell it to advertisers.

Now, with nearly 1.5 billion active users per month, and a particularly rapid growth in the less-developed parts of the world, Facebook means the Web to many – 58 per cent of Indians and 55 per cent of Brazilians think Facebook is the Internet, according to a survey published by Quartz.

For me, as the 2015 equivalent of Rip Van Winkle, this entertaining, passive, linear and centralized space is not the Web I used to know. It is more like television.

The consequences are grave.

More and more readers of digital media are migrating to Facebook, and fewer people visit Web pages directly any more. So digital media and independent authors have lost a lot of advertising income, yet they are now coaxed into paying money to "boost" their Facebook posts to reach their very own audience.

Digital media have been forced into generating "viral" and often silly stories to survive, causing a blow to serious journalism.

And perhaps most importantly, as a result of this popularity contest, minority views are heard less and engaged with less. This is particularly alarming for a world facing serious threats from radical religious and nationalistic groups. Facebook's secret algorithms tend to feed us with more of what we have already liked, reinforcing our existing views while reducing our exposure to challenging and different ideas.

Google's recent corporate restructuring, to refocus on its Web services, is good news for anyone who expects the Internet to be anything more than television. Google built an intellectual – as well as a commercial – empire based on the power of hyperlinks. Despite its zest for monopoly and its disrespect for privacy, it still respects the hyperlink, this basic law of the Web. And it has the capacity to end this dangerous tyranny of the popular.

I haven't heard from Tim Berners-Lee, who invented the World Wide Web, to see how disappointed he must be. But I just checked the website for the Scent of Apple contest and discovered they now only accept Instagram and Facebook posts – no blogs. So much for the sad blogfather in Tehran.

As much as I'm happy for the end of the unjust economic war against Iran, after its nuclear agreement with world powers, I'm heartbroken about the decline of the Web, one of the most promising products of human intelligence for our troubled time.

How to be invisible: Designers create anti-surveillance products to protect privacy
October 14, 2015 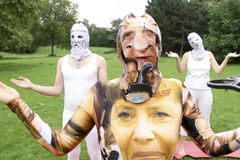