When Russian democratic opposition leader Boris Nemtsov woke up on Feb. 4 and saw that the outside temperature in Moscow was minus 22 degrees, he was worried. Mr. Nemtsov had put great store in the planned demonstration against Russian Prime Minister Vladimir Putin on Moscow's Bolotnaya Square that day. But, given the extreme cold, he figured only 10,000 to 15,000 people (a much smaller number than at the protests in December) would show up. "Thank God that I was seriously mistaken," Mr. Nemtsov wrote in a blog. "Muscovites turned out to be more decisive, stronger and more determined than I thought."

Estimates on the numbers depend on whether the source is the police or the organizers, but it is safe to say the turnout for the protest was well over 50,000. And, by all accounts, the crowd was in a buoyant mood. According to one participant, the acclaimed Russian writer Lyudmila Ulitskaya: "In Russia it is customary for people to be afraid of the regime. … Now the time has come when people laugh at the regime … this laughter on the street is a very dangerous sign for the political authority."

Despite the growing public discontent, it is still likely that Mr. Putin, as the candidate put forth by the pro-Kremlin United Russia Party, will manage to get the slim majority he needs to win the presidential election on March 4. If Mr. Putin were not to get over 50 per cent of the vote, there would be a runoff with the second ranking of the four other candidates on March 25. This is a scenario the Kremlin wants desperately to avoid, so it has pulled out all the stops to ensure Mr. Putin's victory in the first round. Recently, for example, the Central Election Committee ruled that Grigory Yavlinsky, the presidential candidate for the democratic party Yabloko, could not be on the ballot because he did not have enough valid signatures to be registered. And on the day of the Bolotnaya protests, Russian authorities staged a huge rally in support of Mr. Putin, reportedly paying people to attend, giving state workers the day off and even threatening some with sanctions if they did not show up.

Of course, the Kremlin could always resort to tampering with the ballot boxes. But such efforts could backfire given the public outcry over what was seen as widespread fraud in the December Duma elections.

Whatever the Kremlin's concerns about the March election, the real problem for Mr. Putin will be to hold on to the presidency in the longer term. He has thus far managed to maintain public support by providing economic benefits to rank-and-file Russians (thanks to high oil prices) and by convincing people that they need a strong leader, rather than a democratic one, to preserve Russia's stability. Mr. Putin and his supporters have also played on the pervasive anti-Western sentiment in Russia, accusing the democratic opposition of being funded by the U.S. government. But an economic downturn in Russia, coupled with continued protest demonstrations, could chip away at Mr. Putin's support, especially given the general public awareness of pervasive corruption in the Kremlin elite.

In response to the protests, Mr. Putin has lately been saying that he recognizes the need for economic and political change. Yet if Mr. Putin is truly advocating change, it is illogical that he, the undisputed ruler of Russia for 12 years, would be asking the Russian people to elect him for a third, six-year presidential term. As Russian journalist Nikolay Svanidze wrote this week: "Tackling the issues that have been haunting Russia's political system and institutions would largely require a critical reform, if not a demolition of the very system of governance that Mr. Putin himself has created."

Amy Knight, the author of several books on Russian politics and history, has been a frequent contributor to The Times Literary Supplement and The New York Review of Books, where she currently writes a blog on Russia. 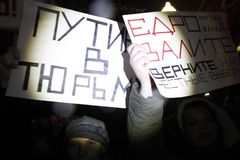 Opinion
Waiting for the next Russian revolution
October 8, 2011 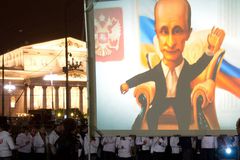