Amid the referendum fatigue and old-fashioned mudslinging, Quebec's election campaign has always really been about a clash of the charters – about the apparent incompatibility between the Parti Québécois's proposed Charter of Values, which would limit religious expression, and the Canadian Charter of Rights and Freedoms, which holds such expression to be a fundamental human right.

It all came to a head this week, when Quebec Liberal Leader Philippe Couillard called the PQ's Charter a "vast machination" aimed at provoking a constitutional challenge that sovereigntists would exploit to whip up support. PQ Leader Pauline Marois riposted that she would use the Constitution's notwithstanding clause to pre-empt such a court challenge in the first place.

It was a colossal flip-flop on the part of Ms. Marois, who's always insisted that her government has legal opinions backing up the constitutionality of the values charter and its proposed ban on religious garb among public-sector workers. But the PQ is desperate to deflate Liberal accusations that its main goal in office would be to hold a third referendum, and that a Supreme Court decision striking down the values charter would constitute one of its "winning conditions" for holding such a plebiscite.

Who's to say, however, that invoking the notwithstanding clause wouldn't serve the PQ's purposes almost as well?

Monday's election is still too close to call, and a PQ victory isn't out of reach. It still has a chance to the extent it can frame the ballot-box question as a choice about whether to adopt its values charter, which remains highly popular among francophones.

Using the notwithstanding clause to override a fundamental constitutional right would be widely denounced outside Quebec, where the clause fell into disrepute soon after its insertion in the 1982 Constitution. The clause allows Parliament and provincial legislatures to circumvent the Charter of Rights. But legal scholars suggest it lost its legitimacy long ago and and most Canadian politicians would not dream of invoking it.

Were a PQ government to insert the notwithstanding clause into legislation incorporating its secular charter, it could count on plenty of Quebec-bashing from the rest of Canada. The Canadian Constitution is routinely portrayed by the PQ as an obstacle to protecting Quebec's culture – Ms. Marois insisted this week that the Supreme Court had "butchered" the province's language laws – and ROC denunciations of using the notwithstanding clause would be cast as attempts by outsiders to impose their values on Quebec.

"We want to be certain that this [values] charter can be adopted and applied," Ms. Marois said in French this week. "And when we see all these articles that are written outside Quebec, we have the impression that others want to intervene in our campaign."

This is not to say that a backlash in the ROC against Quebec's use of the notwithstanding clause would be enough for the PQ to hold a referendum. But the PQ can survive only as long as it can keep sovereigntist embers alive, and one sure way of doing so is to argue that the rest of Canada fails to understand or accept Quebec's values. The federal Clarity Act – which requires a clear answer to a clear question – may have made it harder for sovereigntists to win. But it has hardly stopped them from strategizing about how to do so.

Ironically, the notwithstanding clause was inserted in the Constitution at the insistence of Western Canadian premiers, who sought to preserve the supremacy of elected legislatures. But while Westerners (including Prime Minister Stephen Harper) were once fans, overriding court decisions based on the Charter of Rights has been politically verboten outside Quebec since premier Robert Bourassa did so to uphold Bill 101.

Mr. Bourassa's decision to stay a 1988 Supreme Court ruling invalidating Quebec's requirement of French-only signs generated such a backlash outside the province that it is seen as one of the main reasons the rest of Canada turned against the proposed Meech Lake accord. That deal would have recognized Quebec as a "distinct society" in the Constitution, a concession English Canada came to see as a licence for Quebec to ignore the Charter of Rights – a permanent notwithstanding clause, if you like.

Mr. Bourassa, a federalist, invoked the clause for his own political survival. He was up for re-election in 1989. Should the sovereigntist Ms. Marois do so, it will be because she ultimately has bigger goals. 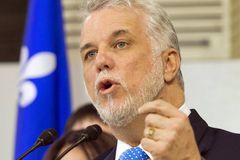