Hugh Segal is master of Massey College at the University of Toronto, senior fellow of the Munk School of Global Affairs, and former chair of the Senate committee on foreign affairs.

The emergence of refugee policy as a pivotal issue in this election campaign has exposed a crying need. Canada needs a rethink of the small-minded, vision-free and bigoted structure of our long-term immigration policies and procedures. Whether minority or majority, Liberal, Conservative or NDP, the next government and parliament have no excuse to avoid this issue. To do so would be to deny the glaring reality of a policy mired in the quiet discrimination of low expectations.

All four federal party leaders have made proposals about refugee acceptance that are paltry and disconnected from humanitarian principles, Canada's demographic deficit and any rational population policy. Code words such as accepting "the most vulnerable" or "working with NGO and faith-group sponsors" are really about delay, dilution and keeping out people who desperately need a safe haven, precisely when Canada needs younger people to strengthen our population and labour force. Current demographics will distort the relationship between working Canadians and those who are retired, decreasing productivity and the base for income generation. We should not be keeping out young Syrian families who are desperate to leave their homes, where they are being attacked by President Bashar al-Assad's forces or Islamic State storm troopers.

The same United Nations that failed to overcome Russian opposition to addressing Mr. al-Assad, the same President Barack Obama who embraced the come-down on confronting Mr. al-Assad's use of chemical weapons, are failing miserably on the refugee crisis. The UN Refugee Agency's slowness in "refugee determination" has become a comfortable excuse for countries that could easily take in refugees.

Canada's low population density and massive geography outstrip that of Germany. Yet under Chancellor Angela Merkel's enlightened leadership, Germany is set to take in more than 800,000 refugees. Even under the proposal of Liberal Leader Justin Trudeau, Canada would peak at 25,000. At least Rick Hillier, former chief of defence staff, evokes a kind of can-do Canadian attitude when he says Canada can have 50,000 refugees here by Christmas.

People who argue that the refugee stream will be endless, and that we will be swamped, echo those long ago who opposed taking in Indochinese refugees in the 1970s, or those who said "none is too many" during the Second World War, or those who opposed Ukrainian, Czechoslovakian or Hungarian migration when lives and freedom were at stake. That narrow view of Canada and its capacity, whether advanced by labour-force protectionists on the left or anti-immigrant bigots on the right, undercuts who Canadians are and how the country was built. It also throws in the towel on measures such as a no-fly zone over Syria that would limit Mr. al-Assad's attacks on his own people. At a time when Russia is reportedly sending troops and advanced weaponry in support of Mr. al-Assad, it would be the ultimate desecration of Canada's core values to be small-minded about taking in Syrian refugees, or limp-wristed in confronting both the Islamic State and Mr. al-Assad's inhumanity.

No Canadian party planned to tackle a refugee crisis in this campaign; they expected to get through the 11-week electoral sojourn worrying about employment, interest rates and tax policy. But the very basis of our humanity, decency and global engagement is being thrust into high relief, commanding attention. No matter how Canadians vote on Oct. 19, the time for a new or re-elected, minority or majority government to ask fundamental questions about our immigration policy, and what is necessary for the future, will clearly be upon us.

Opinion
What Canadians really think about the refugee crisis
September 17, 2015 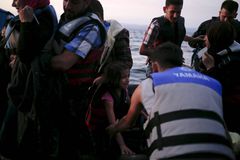 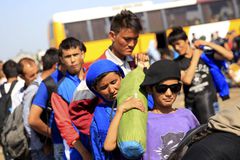