No bad deed goes unrewarded. Last week, Hudson's Bay Co. announced that the designers DSquared2 have been chosen to outfit Canadian athletes for the Opening Ceremonies at this summer's Olympic Games in Rio de Janeiro.

Helmed by Toronto-born brothers Dean and Dan Caten, the label is known for provocations that some consider cheeky and others see as childish, such as having runway models carry lit cigarettes.

The news of HBC's choice is dismaying because of a line DSquared2 debuted last spring in Milan – a collection of furs, beads and patterns that looked vaguely "native" in the way that a plaid shirt makes its wearer look vaguely like a lumberjack. The brothers dubbed the collection "DSquaw," posting on Facebook that the clothes were meant to combine "the enchantment of Canada's Indian tribes" with "the confident attitude of the British aristocracy." Excuse me, I feel a little nauseous.

The origins and first meaning of the term "squaw" are murky, but in the years since confident European aristocrats began their North American land grab, it has definitely evolved into a sexualized insult. Just last week, The Globe published the story of a Saskatchewan woman named Beatrice Wallace-Littlechief, who was forced into the sex trade at the age of 13 and spent years being beaten, exploited and called a "dirty squaw." So while the artistic use of pejorative terms can be provocative, even healing, in the right circumstances, whether or not this particular word can ever be reclaimed is up to women such as Ms. Wallace-Littlechief, not the Caten brothers.

The social-media outcry over DSquared2's dumb move was swift, and though the label quickly scrubbed its feeds of the "DSquaw" term, it never bothered to issue an apology. And why should it? The line has since been worn by both Jennifer Lopez and Beyoncé in televised concerts, and now Canada's most iconic retailer has chosen DSquared2 to represent us during one of the world's biggest branding exercises, the Olympic Games. The brothers haven't got much to regret.

The most fitting adjective for this mess is "Canadian." The Hudson's Bay Co. has a 346-year history full of questionable interactions with indigenous peoples, not all of which happened in the distant, oft-romanticized past. In the run-up to the 2010 Vancouver Olympics, for example, HBC was taken to task when it unveiled souvenir sweaters that looked remarkably similar to the storied Cowichan sweaters made on Vancouver Island by Coast Salish knitters (whose proposal to make them for the Games wasn't accepted). After first attempting to distance its mass-produced products from the handmade goods, HBC eventually made a deal with the Cowichan knitters so that First Nations groups wouldn't disrupt the torch relay.

The influence of the moneyed world of organized sport is also an issue. Janice Forsyth is a professor of Canadian sport history at the University of Western Ontario who says that only "a handful" of indigenous athletes have competed for this country in the Olympics in the past 120 years. "Systemic poverty … prevents most aboriginal people and communities from getting into elite-level sport and staying there," Ms. Forsyth says, adding that the barriers are higher and more stubborn for indigenous women.

A member of the Fisher River Cree First Nation north of Winnipeg, Ms. Forsyth says that many aboriginal people chose to swallow their skepticism for the Vancouver Games, which four tribes co-hosted with the Canadian government. "The [International Olympic Commitee] made these grandiose promises about hosting, that if we got our images out there we'd be better off for it – getting us to buy into the marketing and selling of native imagery, symbolism and products," Ms. Forsyth says. The message was that participation in the Olympic spectacle and marketplace meant indigenous cultures would finally be recognized – and respected.

HBC could have helped fulfill that promise by awarding this year's Olympic subcontract to an indigenous designer (or at least to one of the many excellent Canadian designers who haven't been openly racist). Instead, it chose DSquared. Faced with an exercise in nation-building, one of Canada's oldest institutions chose to rub salt into old wounds, and make new ones as well.

Editor's Note: An earlier version of this column incorrectly stated Canadians have been competing for the past 150 years. In fact, it is 120 years. This version has been updated. 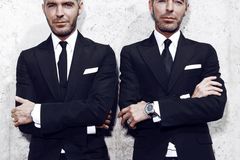 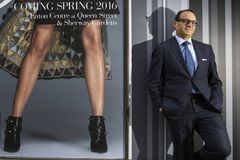