You have to suspect that behind closed doors, part of the talks on handling North Korea between Foreign Affairs Minister Chrystia Freeland and U.S. Secretary of State Rex Tillerson might have been about handling Donald Trump.

With the Trump administration leaving the notion of a military strike in the air, Ms. Freeland wants the U.S. to engage in direct talks with North Korea. So does Mr. Tillerson. We know that because he has said so twice in public, most recently a week ago. On both occasions the White House contradicted the Secretary of State.

That made this an odd kind of meeting to co-ordinate the work of allies, because it's hard to tell whether the point man for the superpower has the authority to speak for it. "This is the President's policy," Mr. Tillerson said, as he talked about drumming up international pressure on North Korea. It was remarkable that he had to say so.

When Ms. Freeland and Mr. Tillerson announced a meeting next month of the "Vancouver Group" – foreign ministers from countries involved in the Korean War, plus a few others such as India and Japan – to put pressure on North Korea to drop its nuclear program, both felt it necessary to stress that the goal of the campaign is to bring North Korea to the negotiating table. They were, in a sense, reacting to Mr. Trump: His rhetoric, and his tweets, has made many think he rejects talks, and is contemplating war.

There's nothing surprising about a U.S. government rallying international pressure on North Korea. Hosting an international meeting on the topic is a classic worthy Canadian endeavour, and the only real question is whether it can be effective. But both Mr. Tillerson and Ms. Freeland have to hope that Mr. Trump will stay off Twitter, or his blast at "Rocket Man" could make some of the nations wonder whether the diplomatic initiative is real. Mr. Tillerson doesn't set the tone.

Those doubts about Mr. Tillerson's authority made his visit an odd first trip for a U.S. Secretary of State in general. Mr. Tillerson was carried in a convoy along the Rideau Canal, met Ms. Freeland and Prime Minister Justin Trudeau and spoke to reporters in a baritone Texas drawl that conveys authority.

But back in Washington, political insiders count Mr. Tillerson's days as numbered. Mr. Trump reportedly plans to replace him with CIA director Mike Pompeo. At any rate, the U.S. President hasn't been shy about contradicting his Secretary of State in public, and on Twitter. Mr. Tillerson's authority is questionable.

That's too bad for Ms. Freeland. Mr. Tillerson is her counterpart, and the two seem to enjoy a good relationship. Their decision to co-host an international meeting symbolizes that. But it's hard to be confident he speaks for Mr. Trump on North Korea or NAFTA. Mr. Tillerson's visit included a session with the Liberal cabinet's committee on Canada-U.S. relations, but amazingly, the Secretary of State might not be a key player.

Mr. Trudeau's aides and ministers have, to their credit, hedged their bets on U.S. relations by forging relationships with several Trump administration figures, such as the President's son-in-law, Jared Kushner. But some, such as Steve Bannon, have gone through the administration's rotating doors. Now, Mr. Tillerson looks a lot like a lame-duck Secretary of State in an unpredictable administration.

For allies such as Canada, U.S. foreign policy is about hedging bets, guessing whom they should be talking to, and whose views hold sway at the moment.

Mr. Tillerson's big diplomatic challenge in North Korea, if he is around long enough to deal with it, happens to be one of the most twisted Gordian knots in global diplomacy – made worse by recent North Korean missile tests.

North Korea's dictator, Kim Jong-un, is continuing a nuclear weapons and ballistic-missile program as a deterrent against attack. Previous presidents have avoided military strikes because it could lead to massive retaliatory strikes on South Korea, killing millions. Mr. Bannon, the former chief political strategist to Mr. Trump, once told a journalist that rules out any military option. "They got us," he said.

Mr. Tillerson is trying to go another route, to mount a tightening sanctions campaign, presumably to tighten a noose around the North Korean economy. But that also requires the co-operation of China and Russia, which have approved sanctions, but not gone as far as the U.S. would like. It also seems unlikely North Korea would agree to fully denuclearize, as the U.S. demands. What happens when Mr. Trump sees a slow, painstaking effort to a compromise endgame? The problem for allies such as Canada is that it doesn't seem like Mr. Tillerson would be able to give them a reliable answer, even behind closed doors. 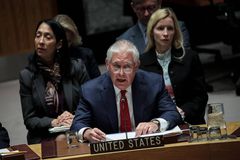 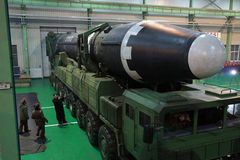