This week, after video surfaced of him rhapsodizing about the benefits to both parties of older men having sex with children as young as 13, the Conservative Political Action Conference rescinded their invitation to Milo Yiannopoulos. He will no longer be filling a featured speaking slot at CPAC this year. Very shortly after that, publishing house Simon & Schuster issued a statement explaining that "after careful consideration" (a quick Google search months ago should also have done the trick), they will no longer be publishing the book for which Mr. Yiannopoulos reportedly received a $250,000 (U.S.) advance.

One can only assume, given the level of buzzword-brandishing, low-effort trolling that is Mr. Yiannopoulos's brand, that Simon & Schuster's target audience for this book was "people seeking a motherlode of inane bigotry, with the occasional nugget of Nazi thrown in, who can't find their way to the bottom of a Reddit comment page." But that's Simon & Schuster's (embarrassingly mercenary) business.

An announcement that Mr. Yiannopoulos was "voluntarily" leaving Breitbart, the "news" site for which he has penned such gems as How To Make Women Happy: Uninvent The Washing Machine And The Pill and Gay Rights Have Made Us Dumber, It's Time To Get Back In the Closet followed shortly.

While he's frequently called a "provocateur," Mr. Yiannopoulos's oeuvre is largely a rehash of dated-before-he-was-born right-wing tropes. "Would you rather your child had feminism or cancer?" "Women can't drive!" So cheeky! Edgy as a political Carry On film, is our Milo.

Although, to be fair, as soon as you're ready to dismiss Milo as too dull to be dangerous, he starts up with how "political correctness" is making the study of "race and genetics taboo in the West" and that this is why we're losing out to China in the vital fields of "IQ-versus-race league tables" and the genetic origins of "black dietary preferences."

Certainly, this is troubling, although tired. The French would like the word "provocateur" back now. English already has the perfect phrase for what you're describing there, Yiannopoulos boosters, and if you feel the need to class it up a bit, maybe the French will let you go with "Le insufferable ass." Given Monday's events, "Le insufferable unemployed ass" sums it up best.

That – one hopes – last day of Milo's Terrible, Horrible, No Good, Very Bad Career has led to confusion over what constitutes the suppression of free speech. I have written A Comprehensive Guide to Recognizing When Your Free Speech is Being Suppressed:

If you're invited to speak on a campus by one student group, only to have another student group say it would rather you didn't attempt to explain, as Milo has, that "Muslims do not believe that when in Rome, do as the Romans do. Muslims believe: When in Rome, rape everyone and claim welfare," that is not an attack on free speech. It's just free speech.

If you find yourself criticized for something you have said, and thus wonder if your right to freedom of expression has been taken from you, ask yourself these simple questions: "Am I in jail?" and "Has someone smashed my printing press?" Take a second to look around; study your surroundings. If you find that you're not in jail (grey walls, iron bars, people getting very upset if you try to leave) but instead in, say, a dining room where someone is saying "Wow, that's a really stupid thing to say, but you said it anyway and now you look like a total jerk. I'm just going to sit here, eat my potato salad, pretend I don't know you and never invite you back" – your speech remains entirely unsuppressed.

When the moon hits your eye like a big pizza pie, studies have shown that this is not, in fact, a limitation of your free speech, that's amore. I can't believe I have to explain these things.

Occasionally, people may say, "Hey, dude, your long history of spouting monstrous and factually inaccurate things about just about everyone who isn't a straight, white man with a self-proclaimed passion for ethics in gaming journalism doesn't make you look better here. It just makes the people who waited until your thoughts about raping 13-year-olds came up – while celebrating your dismissal of the rape of university students – to dump your ass look worse." These people aren't suppressing your free speech. They're just, as I imagine even John Stuart Mill would say, "pointing out the bloody obvious."

Raindrops on roses and whiskers on kittens, bright copper kettles and warm woollen mittens, brown paper packages tied up with strings are not suppression of your free speech. They're a few of a failed nun's favourite things. Write that down if you need to.

If someone hands you their megaphone, gives you a $250,000 advance for using that megaphone, then decides to take their megaphone back when they find you explaining how "sexually mature" 13-year-olds benefit from "enriching and incredibly life-affirming" sexual relations with older men, that is not you being robbed of your right to free speech. That's a business not wanting a megaphone with their logo on it in the hands of a pedophilia apologist, you creep.

When I write that ditching Milo now proves that Milo-love was never about defending "Free speech!" on principle, as his promoters mostly claim, that is not an attack on free speech. That is just a logical conclusion: People loved Milo because he was their gay-hating gay friend who let them know it was okay to be homophobic while he helpfully articulated their racism and hatred of women and trans people.

Milo's business model was delivering bigotry in a camp, plausibly deniable package; and people loved their proxy, until he went toxic. "I will defend your right to free speech as long as you're saying that women can't do math and Muslims are destroying the West, but abandon that cause as soon as you defend raping children" is truly the darkest kind of fair-weather fandom.

When a radioactive spider bites you while you're watching your parents get gunned down by a desperate criminal outside a Gotham theatre and you want to put some cream on it or something, but this really big guy keeps trying to tell you you're a wizard, that's not anyone suppressing your free speech. That's your origin story. Get with the program, Spiderbat Harry.

Gin toddies, in large measures, may (much like never having to listen to Milo Yiannopoulos's theory on the non-existence of lesbians) be part of a fine life, but they're no impediment to your free speech. Breathe easy.

Now, there are those who say Milo is beneath discussion and we should just ignore him, but just because very little of what he says makes any sense – that doesn't mean he doesn't mean anything. Milo's rise says a lot about the current state of conservatism, about which I can only say, "Where you goin', guys?"

Time was it could be argued that conservatives sought much the same end as did liberals – promising a better, more prosperous society. True, their vision of "betterness" and "prosperity" was unlike the left's vision and they wanted to take a different road to get there; but their path was, at least, recognizable as a road.

The endgame of conservatism was once something more ambitious than "making liberals really mad," which, as challenges go, falls somewhere between "making ice cream melt" and "taking candy from a Pez dispenser."

These days, American conservatism does not look like Ronald Reagan promising "Morning in America." It looks like little Tommy poking his sister with his middle finger over and over in the back seat of the car, and then, when called on it, saying "I did not!" followed by "Immigrants and women started it!"

Milo Yiannopoulos is a case study in the importance of context
February 21, 2017 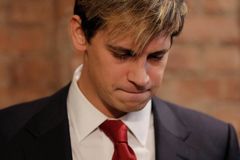 Opinion
A motion to quell anti-Muslim hate shouldn’t be up for debate, but here we are
February 17, 2017
Opinion
Trump effect hits Alberta, and Notley pays the price
February 21, 2017