The recent arson-based murder of a Palestinian baby, Ali Dawabsheh, and his father Sa'ad, in the West Bank village of Duma by Jewish radicals raises new questions around settler violence.

The debate is well-rehearsed: is this a function simply of "bad apples," or is it part of a deeper, systemic problem called the occupation? The New York Times, reporting on the aftermath, underscores this: "Palestinians and leftist Israelis argue," Jodi Rudoren writes, "that Israel's nearly half-century occupation of the West Bank and impunity for settler vandals inevitably led to Friday's firebombing of the Dawabsheh home" (italics mine).

But do you have to be a "leftist" to recognize the brutal, enabling power of the occupation?

For a decade now, the radical fringe of the Israeli settler movement has played a violent game of cat-and mouse with the government. Called "price tag" attacks, settlers retaliate for government actions that curtail their activities. So if a West Bank settlement outpost – the small percentage of settlements deemed illegal even under Israeli law – is ordered moved, settlers might torch a mosque, destroy part of an olive grove or, less often, attack individual Palestinians. While the target may be the government, the victims are the Palestinians and their property.

Sometimes these vigilantes actually spray-paint the words tag mechir (price tag) on the walls of a firebombed building. Others have responded by founding a group called Tag Meir ("meir" comes from the word for "light") which sponsors reconciliation activities.

In Duma, the attackers were blunt. "Revenge!" they scrawled.

Price Tag violence has even given rise to a new subfield in my own field of international relations and Israeli politics. My Israeli colleague Ehud Eiran, along with his co-researchers Peter Krause, Daphna Canneti and Sivan Hirsch-Hoefler, are on the forefront of this exploration of settlers using violence and vandalism to protest their government's policies.

There were a couple of possible events for which the Duma attack may have been a response. One was the recent demolition of some buildings in the settlement of Beit-El. Another was the one-month anniversary of the killing of a 26-year-old Israeli, Malakhi Rosenfeld, in the nearby settlement of Shilo. Or, Mr. Eiran adds, "this might be a new generation" of the hilltop youth "with a more radical agenda that is not tied to removal of outposts but to a larger political goal."

So if the protagonists are indeed shifting the dynamic to a new, more awful and nihilistic stage, as Mr. Eiran suggests, what is to be done?

We can talk about more heavy-handed prosecution, as many have done, pointing to the culture of impunity which most violent settlers have enjoyed. We can urge the Israeli government to call them terrorists. (Prime Minister Benjamin Netanyahu did in fact use this word to describe the Duma attack.) But whether vengeful or strategic, these awful attacks need to be understood in the broader political light of occupation, including the settlement project to which the state has become bound over the last 47 years.

In the West Bank, one population – the Jewish (settler) one, enjoys the right of voting for the government whose military governs the area. The majority population – the Palestinian one – lacks that right. We must remember that in the West Bank, unlike in Israel proper, Jews and Palestinians are not simply of different ethnicities and religions. If this were the case, the solution might lie in nation-building and education around co-existence. Instead, Israelis and Palestinians living in the West Bank are not fellow citizens. Putting non-citizens in the path of citizens who are jealously guarding their once-deemed-temporary right to stay there (recall that after the Six Day War, the occupation was supposed to be "temporary") is a recipe for injustice at best and disaster at worst.

One can ask whether, in the event of a withdrawal and a two-state solution, the radical elements of the settler population would simply turn their sights on Palestinians within the Green Line, the 1949 armistice line dividing Israel proper from the West Bank.

Israelis themselves have a long history of being the target of spoiler violence, unfortunately, usually by Hamas and Islamic Jihad groups, which have sought to disrupt peace-process advances. The shadow of an Israeli murdering another, though, still looms large with the memory of former prime minister Yitzhak Rabin's assassination.

The answer, at least in the long term, is not likely. As peace talks – should they eventually resume – give way to a peace agreement entailing a two-state solution, the wind will be taken out of the sails of those who wish to block such an outcome. There will be no more "hilltop youth," no more "illegal outposts" to contend with, and no more jockeying over land appropriation from those who are not subjects of the state. Instead, there will be two states with defined populations, defined borders and a more certain future. 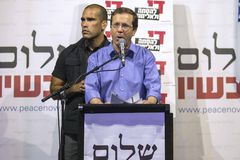