Derek H. Burney was Canada's ambassador to the U.S. from 1989-1993. He was directly involved in negotiating the free-trade agreement with the U.S.; Fen Osler Hampson is a distinguished fellow and director of Global Security at the Centre for International Governance Innovation and Chancellor's Professor at Carleton University.

Remarkably, Europeans are hanging tough on Russia – at least for now. European Union ambassadors have agreed to extend current economic sanctions against Russia for another six months. What is largely pro-forma approval by their foreign ministers comes Monday.

Russian President Vladimir Putin was clearly hoping to break the EU's 28-member consensus by prying away those countries that have openly vacillated on sanctions, like Greece. Despite Greece's anger with the EU over its debt negotiations and Mr. Putin's apparent offer to underwrite some of its debt, President Alexis Tsipris clearly didn't want another fight on his hands.

This apparent moment of European unity may be fleeting, however.

In the run up to the July expiry deadline, the French and Italians urged a more flexible approach towards Russia if there was discernible progress on the Minsk accords on Ukraine. But that clearly hasn't happened. The recent G7 Summit, hosted by German Chancellor Angela Merkel, helped put some spine into Europe's meandering Mediterranean members.

She has emerged as Europe's only real leader while U.S. President Obama continues to plead from behind. But Ms. Merkel has other big problems such as how to deal with the fallout from Greece's imminent exit from the euro. There are mounting fears that Grexit will give Mr. Putin a Balkan foothold in Europe. Mr. Putin has also has a friend in Italian Prime Minister Matteo Renzi and the Italian business community who gave him a remarkably warm reception on his recent visit to Italy, which is Russia's second most important European commercial partner after Germany.

The bigger challenge lies with Europe's public. No one wants anything to do with war, nor is there much concern or sympathy for Ukraine. The cosseted life of European social democracies is numbing any sense of global or even regional responsibility. The Greeks are in for a shock because no one cares much either whether they stay within the euro zone or go.

As Ian Bremmer says, it is an increasingly self-centered world and most especially in Europe as revealed by a recent PEW survey of public opinion. Not only do Europeans think that Ukraine is simply not worth the trouble, but they don't even want to defend their Baltic or Eastern European neighbours who are members of NATO.

Meanwhile, Russia has mounted a highly effective propaganda and media campaign in the West through state-sponsored television outlets like Russia Today, social media, and Internet "trolls" who attack Western critics. Although sanctions have clearly hurt the Russian economy, they still do not appear to have had much impact on Mr. Putin's decision making or strategic ambitions to establish a Russian sphere of influence.

NATO leaders have to stop saying what they won't do – that they won't go to war with Russia and they won't deliver weapons to Ukraine. A policy that is defined in negatives is not a real policy. They are going to have to start working on Plan B if the goals in the Minsk timetable are not met and sanctions expire (technically at the end of January, 2016).

NATO leaders also have to stop talking about "deterrence" in the abstract but put in place policies, military exercises and equipment that send a credible signal to Russia that NATO is prepared to defend Europe. This means setting well-defined trip wires in the Baltic States and Poland and using security partnerships creatively to allow frontline states, which are vulnerable, to resist outside pressure and maintain security within their borders. The West will also have to do a much better job of countering Mr. Putin's "information" and propaganda offensive.

Additionally, Europeans have to get serious about securing economic and political stability in Ukraine and reversing its rapid decay. Ukraine has far more existential value to Mr. Putin than it does to Europe. But if Europe can funnel hundreds of billions in loans and direct handouts to Greece, which has shown little evidence that it wants to help itself, then it can certainly do a lot more to help the Ukrainian people who are showing courage and determination in vastly more difficult circumstances.

A comprehensive, unified strategy for dealing with Russia and Ukraine will have to be built on more than just a renewal of sanctions. Alas, it may take a starker crisis to mobilize a more coherent European and NATO response.

Deal for Greece within reach after roller-coaster day of talks
June 22, 2015 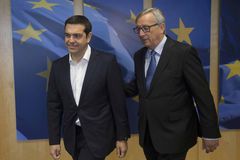