It is Old Montreal's most identifiable sound. The hypnotic clip-clop of horse hooves on its narrow, treeless, cobblestone streets echoes like a soothing voice from the past, less a juxtaposition with the present than a reminder of its tiny spot on a never-ending continuum of time.

If history is your thing, Old Montreal gushes with it, at least by the standards of this youngster land. Toward one end is Place d'Armes, the 17th-century square over which towers the neo-gothic Notre-Dame Basilica that draws tourists, regardless of faith, like pilgrims, only with selfie sticks. Toward the other end is Square Victoria, named for the British monarch associated with spring's most anticipated holiday everywhere in Canada except in Quebec, the province that most bears her mark. Here, Victoria Day is officially called la Journée nationale des patriotes.

That bit of revisionist history cannot expunge the evidence. Old Montreal is largely a museum devoted to Victorian-era Canada, with its majestically pillared banks and stately insurance-company buildings. The French influence is undeniable, but the architecture of the neighbourhood mostly dates to the 19th century, when this was the most-happening square-kilometre or so in pre- and post-Confederation Canada, and the langue du travail was English.

Unlike Old Quebec, with its much earlier and more relaxed New France cachet, Old Montreal evokes the all-business determination of Lower Canadian elites for whom heavy stone facades must have been a gauge of financial solidity and moral probity. Everything here was built to last, a testimony to a glorious era that predetermined the kind of country Canada would become.

There is no better vantage point from which to soak up all this history than the cushionless confines of a calèche. Riding high up in a distinctive horse-drawn carriage gives enthralled (mostly foreign) tourists a better view, at a proper pace, of what makes Old Montreal so special. It provides a taste (and smell) of what life was like when horses were the main means of transportation and equine droppings, not potholes, were the main bane of Montreal drivers.

Alas, political correctness has caught up with the calèches. Not even Mayor Denis Coderre, the back-slapping chief magistrate who usually spends his time pooh-poohing the politically correct progressives at City Hall, has been able to ignore the pressure applied by the opposition Projet Montréal and their animal-rights-activist supporters. Last week, Mr. Coderre, perhaps startled by viral videos of two minor accidents involving calèches, slapped a one-year moratorium on the industry, the time to be spent drafting a "real horse policy."

For the city's two dozen or so cochers, the colourful crew of carriage drivers who animate their calèche tours with flamboyant twists, the Mayor's sudden move amounts to a horse remedy that could kill their livelihood. Not only are they out of a job at the outset of their most lucrative season; many fear that, without an income to offset maintenance costs, their horses will be sent to the slaughterhouse. Canada, believe it or not, is a major exporter of horse meat.

Mr. Coderre hopes calèches can return to Old Montreal next year, once tougher regulations governing the horses' working conditions are put in place. Whether it amounts to a one-time reappearance to commemorate the city's 375th anniversary or a permanent return remains to be seen. Opponents of the calèche industry vow to press on with demands for a permanent ban.

No one who looks these horses in the eye can deny they are sentient beings. But let's not anthropomorphize them. To suggest the calèche trade is cruel or barbaric, as its critics contend is, well, horse feathers.

Since 2012, animals employed in the Montreal calèche business have undergone weekly medical exams. A report produced last year by veterinarians at the University of Montreal concluded that the horses have never been in better health, in contrast to the poor condition of some horses in 2012. Owners and cochers alike, the report said, have become much more attentive to the welfare of their animals. It added that forcing a horse to pull tourists around Old Montreal "is not an act of cruelty and does not go against the welfare of the animal," provided the horse is healthy.

The animals employed in the calèche trade are, literally, work horses. Many are of the Canadian breed, which was developed in 17th-century New France specifically to endure the harsh climate and brutal workloads of the colony.

They, like Old Montreal, provide a history lesson all in themselves.

Harvesting the potential of Montreal’s Silo No. 5
February 5, 2016 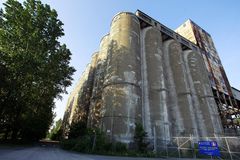 Montreal bans horse-drawn carriages for one year as it tightens regulations
May 18, 2016 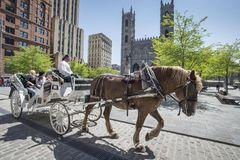