David Foot and Daniel Stoffman
Contributed to The Globe and Mail
Published December 29, 2014 Updated May 12, 2018

It's rare for a book on economics to become a bestseller. It's even rarer for a book by a hitherto unknown economist to reset the discussion among economists and policy-makers over a vitally important economic issue. But that's what French economist Thomas Piketty did with the publication earlier this year of his 700-page tome, Capital in the Twenty-first Century.

What did Prof. Piketty say that has attracted so much interest? That the very rich are getting richer, creating ever more inequality between people who own large amounts of capital and the rest of us who depend on our labour to earn a living.

In Canada, according to a recent study of Statistics Canada data by the Broadbent Institute, the top 10 per cent has seen its median net worth grow by 42 per cent since 2005, while the bottom 10 per cent saw its median net worth shrink by 150 per cent. In the industrialized world as a whole, the incomes of the wealthiest 1 per cent are growing three times faster than those of the rest of the population.

Prof. Piketty's solution? A global wealth tax on the world's richest. The tax would create new revenues that governments could use to help the majority whose incomes are stagnant or falling.

His audacious idea has merit but it also has a fatal flaw – it's not going to happen. The ultra-rich are a minority but an influential one, and they would use their influence to block such a tax. Moreover, the chances of getting international agreement for such a radical step are nil.

Nevertheless, he is right that the time has come to rethink the conventional wisdom that big government is bad, and so must not be fed higher taxes that would make it even bigger. Government debt is also bad, say proponents of this view, but the only acceptable way to pay it down is to cut programs.

They are right that reducing debt is important, but there is another way to do it: finding new sources of revenue.

All developed countries need to be concerned about debt because of demographics. The combination of longer lifespans and reduced fertility has resulted in older populations, a trend that will intensify in the years to come. Aging impedes economic growth because, while young people just starting out in their careers have no option but to spend, older people are more likely to be savers. Societies are like people. An aging society has a smaller proportion of its population in the work force. Therefore, it needs to have less government debt.

Canada's population is younger than those of Western Europe and Japan but we, too, have an aging population – a trend that will continue, barring an unlikely surge in fertility. For that reason, Canada can no longer count on faster economic growth to effectively reduce the impacts of interest payments on debt.

Although the global wealth tax is a non-starter, other potential measures exist that would arouse less opposition while providing a source of new revenues – taxes on financial transactions. Such taxes have the virtue of being so small as to be almost painless and yet able to raise vast sums.

About 40 countries, not including Canada, already use such taxes. In 2011, Bill Gates, the world's richest man, asked the G20 member states to impose a tax of one-10th of a percentage point on sales of equities and one-50th of a percentage point on transactions involving bonds. These minuscule taxes would have raised $48-billion (U.S.) a year to help poor countries pull millions of their citizens out of poverty. Mr. Gates's proposal was defeated, with Canada among its opponents.

Another unplumbed revenue source is foreign exchange. About $12-trillion is moved into and out of Canadian currency every year. A tax similar to those proposed by Mr. Gates, of a small fraction of 1 per cent, split between buyer and seller, would raise enough money fairly quickly to wipe out all government debt in Canada. After a period of debt reduction, the new revenues from these taxes could be diverted to programs to benefit the general population. Health care will need new resources as the population ages. Investing in our education system is bound to mitigate income inequality because more and better education leads to better jobs.

The private sector charges its own "tax" on foreign-exchange transactions – the difference between the buying and selling rates – and the economy does not grind to a halt. So there is no reason to assume a small tax collected by government, and earmarked in its first five years for debt reduction, would do any economic damage. The tax could be collected electronically and, unlike Prof. Piketty's wealth tax, would not require a large bureaucracy to manage it.

Canadians already pay sales tax on most of what they buy. Why should financial transactions be exempt? If the world's richest man thinks they are a good idea, less wealthy billionaires can hardly complain. Such taxes would be a variation on Prof. Piketty's wealth tax since they would mostly affect rich individuals and corporations. Whether one agrees with his conclusions or not, the professor deserves credit for reviving the debate on how to introduce more fairness into our capitalist economy.

Thomas Piketty: 'You do need some inequality to generate growth'
May 12, 2018 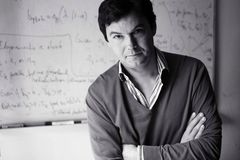 Opinion
Who cares about inequality? Wonks
May 12, 2018

Opinion
Would capitalism work better with ultra-high taxes?
May 12, 2018