'I'm from future and I've come to give you the most tremendous, beautiful warning," the stranger in my kitchen said to me when I came downstairs to make myself cocoa the other evening.

"I'm not sure I believe you," I said, having, as I do, a skeptical nature.

"Good Lord," I said, "you have come from the future and through some abomination of medical science, voter suppression and the workings of the electoral college, Donald Trump is still president of …"

"Yes, @realdonaldtrump has been @potus of the Trump United States and Casino Resort for generations now," he interrupted. "Sad!"

"What?" he said, in obvious confusion.

"It's SAD!" I said, recognizing there was a language barrier to be overcome, "Would you like a … spectacular … mug of cocoa?"

He removed his red baseball cap, which I saw had the words "government issue" stamped inside and "Make America Greater Againer" on the brim, and nodded his head, which, although entirely covered in the thick hair of a young revolutionary, was still styled in an elaborate combover.

"But why have you chosen to bring your message to me?" I asked, getting out the milk.

"Well, to be big-league truthful," he said, "I was looking to talk to folks from The Failing New York Times, but when I looked on your newsstands all I could see was The New York Times. Not sure what that's about, so I came to you, Crooked Tabatha."

I was not offended, for I understood immediately that, where he came from, "crooked" was a word routinely applied to all women, because it made people clap.

"How goes the future?" I asked, scooping out some cocoa powder. "Do you not have any news outlets?"

"Not since the passing of the 'Bias Media Should Give Up! Trump Won! Act,'" he said.

"What?" I said. "That's outrageous! How did this act get through Congress? You're telling me you've come from hundreds of years in the future and still no one has investigated the correlation between support for Trump and the inability to add the letters 'ed' to the word 'bias'?"

"Progress on that didn't win any more after President Trump issued an executive tweet saying that 'When Luxemburg sends its people, they're not sending their best! SAD!' He had all the lexicographers deported 'back' to Luxembourg as unfair immigrants. Senators are no longer elected. In my time, the position is granted exclusively to @realdonaldtrump's ex-wives as part of their settlement packages. This happens the very second they sign a non-disclosure and always-agreeing agreement."

"Is that a lifetime appointment?" I asked.

"No, it lasts only as long as Trump rates them at least a 7," he replied "and that particular motion passed 135 ex-wives to 0, with Ivanka abstaining."

"Well, there are the giant, loudspeaker-equipped, gold-leafed statues of Breitbart contributor Milo Yiannopoulos on every corner …"

"The Supreme Court ruled that blaring state propaganda 24 hours a day isn't constitutionally 'Very unfair!' if some of your best giant shouting statues are gay. There are yuuuge flickering screens with @realdonaldtrump projected onto them in every public space in the nation, both of them, and in every private space in which Trump has a stake, so all of the other spaces in America.

"The sign beneath the screens reads in giant gold Sharpied letters, 'Bigly Brother is Distracted Right Now but Don't Forget Barron is so Great at the Cyber.'

"These screens may or may not be propaganda. The Supreme Court has been unable to make a determination as, to quote Lone Justice Scott Baio, 'No one can tell what President Trump's actually talking about, although the court is unanimous in its opinion that, in the tradition of old white men before him, the conversation always comes round to golf.' Hey, that's a very impressive, massive and impenetrable border wall you're holding there," he added.

"It's a wooden spoon," I said, "I'm just, you know, stirring the cocoa. You can buy them at the dollar store for …"

"Are you sure? Can this be true, folks? Back in Grade 3 at @realdonaldtrump Primary School and Casino, my teacher, Crooked Jenkinson, taught us that a dozen of those planted in the sand along the U.S.-Mexican border were all that was keeping America 'Safe and Great Again.'

"It was one of the more winning schools, believe me. My Crooked Mom clipped a lot of education coupons and worked four great manufacturing jobs at 60 cents an hour to send me there. We were taught that @realdonaldtrump had made America great again by fulfilling his election promise and building that wall. It was in all the textbooks. Both of them. And now you tell me you can buy impenetrable border walls at the dollar store? So that's why Mexico agreed to pay for the …"

"Mexico paid for …" I interrupted – one does wonder how history will play out, "'the wall'?"

Here, I put my "massive and impenetrable border wall" down on the counter and made air quotes.

"Well, half the wall, and we had to let them Make Texas Mexico Again," he said. "You know, the Gold Milos will always shout that Trump's 'yuuuge, long-fingered hands make him a winning negotiator' but some of the more radical great brains who have said a lot of things with best words in my organization question this. One or two of them even use border walls to stir chili."

"What exactly is your organization?" I asked, ladling him out a steaming cup of cocoa, using another handy national-security-enhancing utensil.

"We are the Offshore Wind Farm Construction Front," he said "Trump's good brain was right to fear us and hey, Crooked Tabatha, this is some successful, very successful cocoa, many people, some very smart people, are saying that."

"You are the only one that's saying that," I said.

"I know," he said, again confused, "and that is why I gave a great job to the the first-person singular. Do you mind if I demonstrate no conflict of interest whatsoever?" he added, indicating the cookie jar on my counter.

"Go ahead," I said, passing him the jar and then watching him take two handfuls of cookies. "So the future is pretty grim then," I said.

"At the base of the Statue of Liberty the inscription reads, 'Honestly? Some of you guys look kind of huddled. You will never get by the bouncer at the Golden Door dressed like that. Visit IvankaTrump.com and check out The Style Guide: Go From Desk to Date Night. Don't forget to enter promo code "wretched refuse.'"

"So what is the message you want me to give to the American people?" I asked.

"Don't vote for him! Don't let him be president! If you act in time he will never get a chance to 'Make California Glow with that Faint Radioactive Light Again.' There will still be health care that is not mostly bandages that are Trump-branded, gold-leafed and only available through The Sharper Image. The truth must get out: Steak does not cure cancer! Maybe, in an alternate future, America does not trade Alaska to Russia for five rounds of golf with National Best Friend Vladimir Putin.

"Maybe the Paris Agreement is not abandoned and the City of New Orleans never has to be rebranded The Donald Trump Underwater Scuba Adventure Park and Aquatic Casino, and polar bears will still be a thing! We can turn this around! There are still a few days left before the U.S. election on Nov. 28!"

"No," I said, "no, there aren't. Your history book has clearly been amended; the election was more than two weeks ago. It was only Donald Trump who said the election was on the 28th – and people still voted for him."

"Well, since winning the election, Trump has made time for only two intelligence briefings but has found room in his schedule to meet with members of the press, largely, it seems, to complain that they aren't using flattering enough photos of him.

"Trump has revealed himself to be less a puppet, as was feared, and more a windsock; his opinions swing around alarmingly to match those of the last person he wanted to make like him.

"He has also shamelessly shilled for his own companies on state calls, and had his daughter, Ivanka, who will run those companies – the assets and interests of which remain a mystery – in on those meetings. He's boasted that he stopped a car plant that was never going to move from moving. Trump's tried to have the British Ambassador to the United States replaced by a guy he likes, a guy that pretty much only he likes, that being quasi – and I use the prefix generously – fascist, seat-losing UKIP interim leader, Nigel Farage.

"Perhaps most alarmingly, Donald Trump, the man who swore only he was capable of defeating ISIS, has lost a fight with a Broadway musical …"

"We have always been at war with Broadway," said my kitchen guest, in what struck me as an entirely involuntary manner.

"Look, on top of everything else," I said, "I will never forgive Donald Trump for making me defend musical theatre. I would not bother going back to the future, if I were you. Would you like to make my sofabed great again for a while, comrade?" I added, gently. 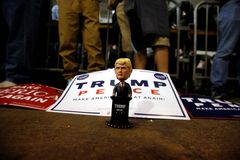